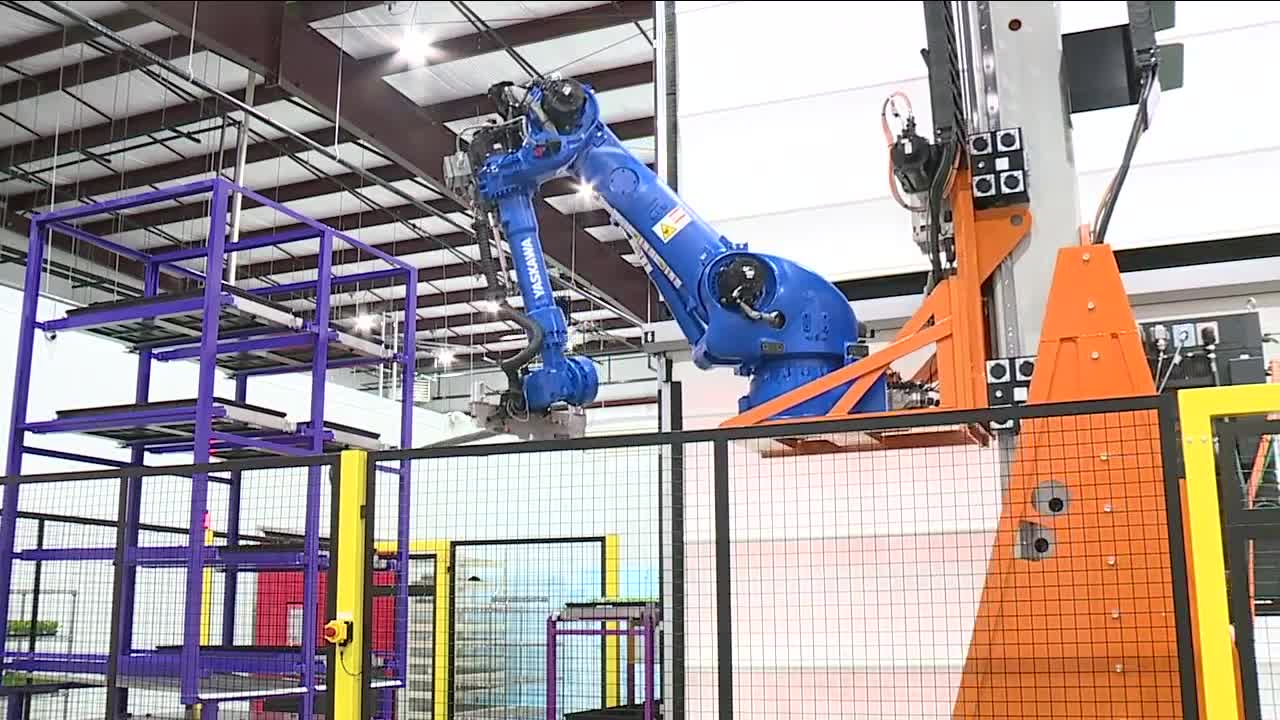 The indoor farm is an expansion from its Spring Grove location in Cincinnati. There are now two buildings in Butler County, a third one being built and additional pilot facilities in Alabama, North Carolina and Arkansas. The intent is to take farming well into the 21st century using robotics.

Tim Brodbeck sees himself as a key player on the team at 80 Acres Farms.

"Every day, I’m kind of the quarterback for this facility," he said. "So I’m directing everybody. I’m training some people. It’s a new facility so everyone’s pretty much new hires."

And if Brodbeck is the quarterback, the football is a robot.

Brodbeck is a farm supervisor and one of about 120 workers at the growing Southwest Ohio company. 80 Acres Farms opened a 10,000-square-foot building just outside Hamilton about a year ago. The indoor farm is an expansion from its Spring Grove location in Cincinnati. There are now two buildings in Butler County, a third one being built and additional pilot facilities in Alabama, North Carolina and Arkansas.

The goal is to take farming well into the 21st century using robotics.

“Our thought was if we can automate that really difficult backbreaking labor that drives all of that process variability, we could get a lot closer to reaching the right price points,” said Mike Zelkind, CEO and co-founder of 80 Acres Farms.

That's why a focal point of the new building is the robot programmed to glide along a track system and lift large, heavy trays of growing produce into position amid 10 recycled shipping containers stacked nearly from floor to ceiling. Zelkind said the process is almost fully automated thanks to the robot, which they've named Sam.

“'Sam' for Samantha, who was one of our first employees. She was our first grower,” said Zelkind. Human Sam still works there.

The building, which from the exterior looks like a small warehouse, is equivalent to a small commercial farm, said Zelkind.

Inside, the focus is on growing leafy green vegetables, including eight types of lettuce, and several herbs. The growing happens inside the shipping containers under prescribed conditions of temperature, lighting, water, airflow and nutrients that change as the plants grow.

Each step was developed in off-site locations, then combined under one roof, according to Zelkind. The process also has the benefit of limiting human interaction during the growth cycle, which he said is needed currently with the coronavirus pandemic.

“It grows in a very safe, clean place. Robots move around and do all the difficult work, and people that are actually helping package this food are more like machine operators,” he said.

The growth also happens quickly, according to Zelkind — in about 24 days. That's much shorter than traditional farming methods.

“So in a greenhouse, it might take you 50 to 60 days. Outdoors, it depends on where you are, what the climate is, what the conditions, what time of year. It could take you 70 to 110 days for some of these crops,” said Zelkind.

The next step in the growth of 80 Acres Farms is the opening of an additional 70,000-square-foot growing facility adjacent to the smaller facility near Hamilton. It will have more space for more plants and more robots when it opens this summer.

“We’re about 75-80% automated right now, from all the key unit operations in farming. And, across the street we’re going to be well over 90% automated," Zelkind said.

80 Acres Farms already distributes its produce to local restaurants and stores like Jungle Jim's and the downtown Cincinnati Kroger store. It has also gotten a lot of attention for its live growing display outside the Guggenheim Museum in New York.

“It’s a way to reconnect people back to their food. And, if we can grow tomatoes on 5th Avenue in New York, right in front of Guggenheim, we can grow them anywhere in the world,” he said.

“Here we can try new things, we can go about new ways," Broadbeck said. "It's encouraged."