How UC's snowplow simulator could help ODOT with a driver shortage 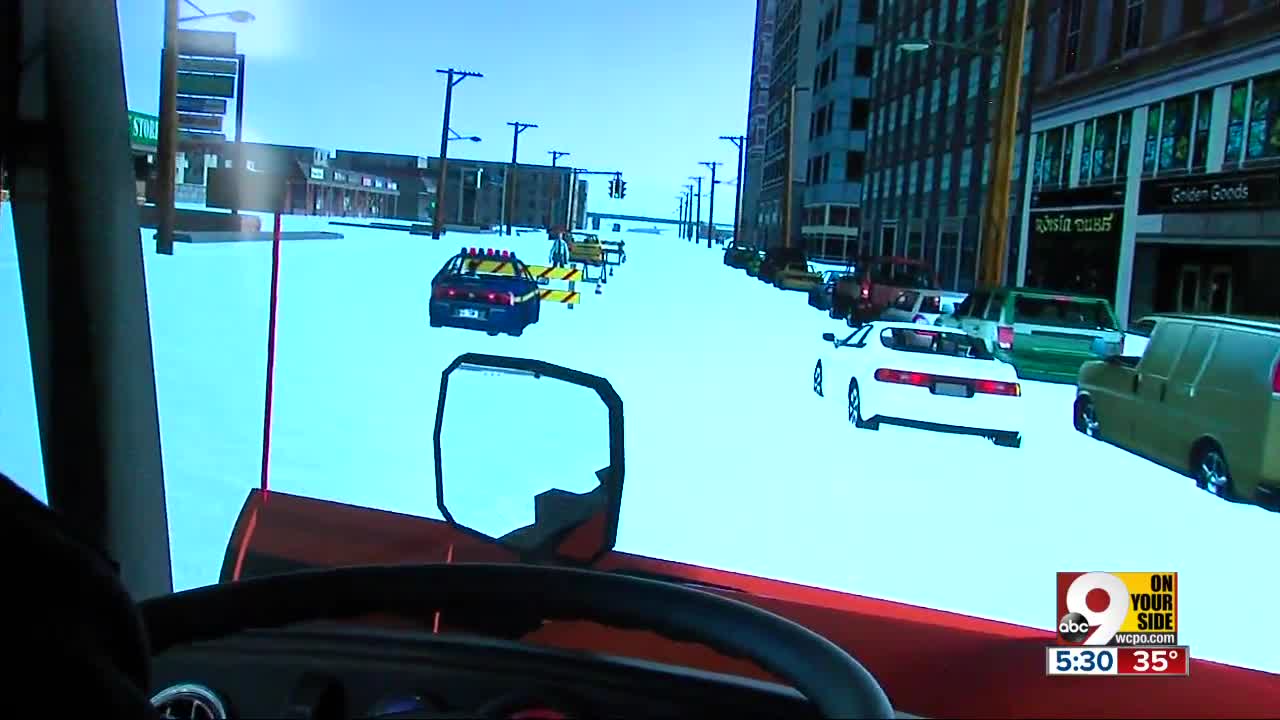 Through a nearly $1 million grant from ODOT, UC recently received a trailer that houses the simulator. The three-year research project and pilot program uses the simulator to teach snowplow drivers how to operate the plows and drive in adverse conditions. It's necessary because the state is losing experienced and qualified plow drivers, leading ODOT to hire about 350 new plow drivers each winter. 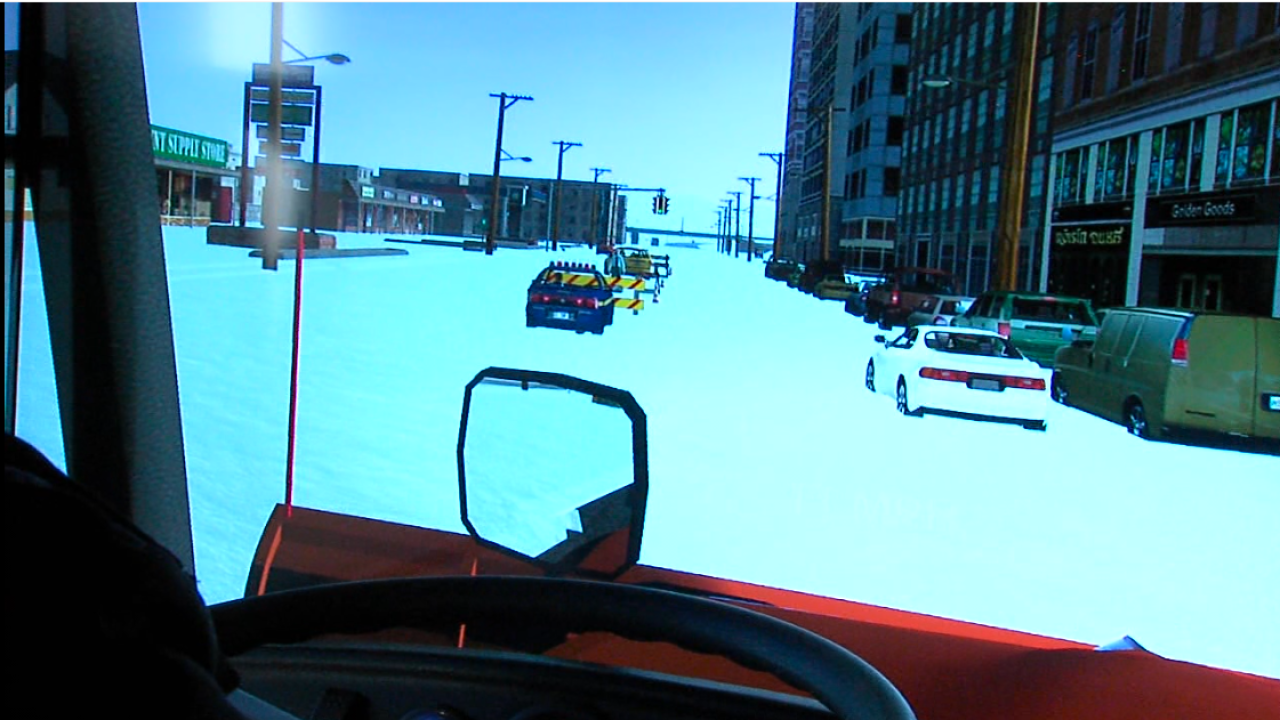 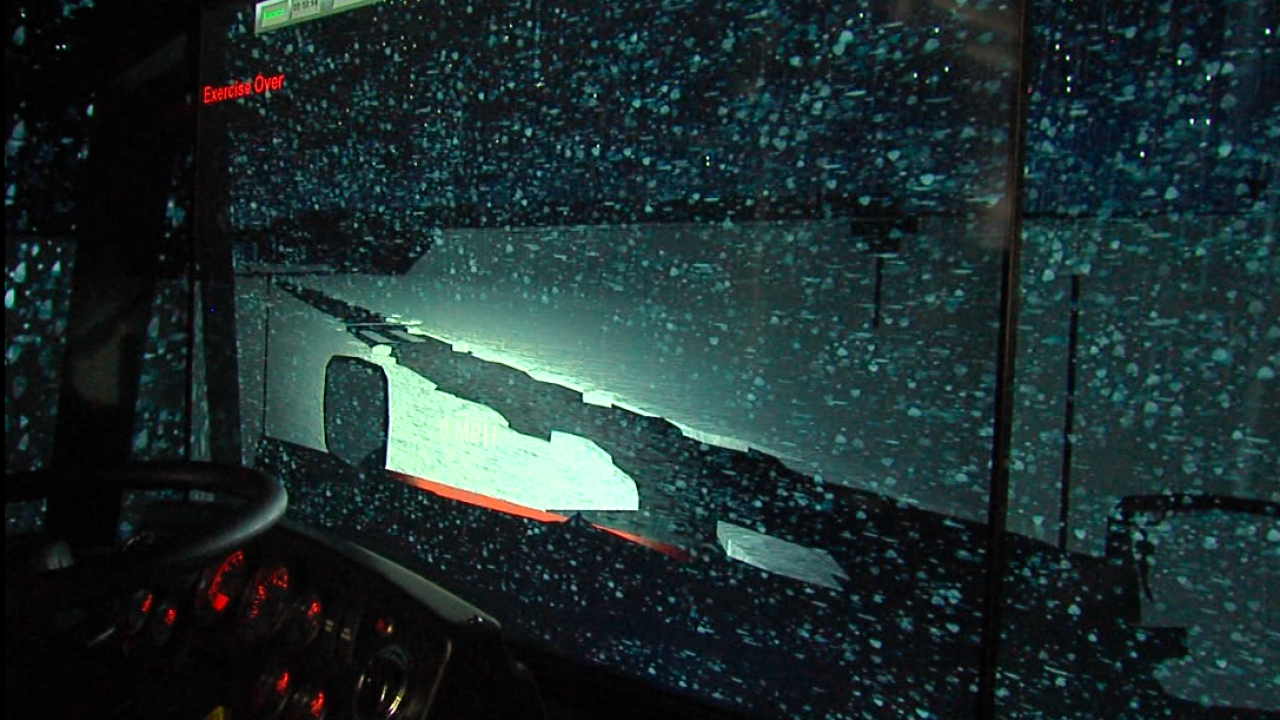 We haven't seen much snow around the Tri-State this year, but University of Cincinnati graduate student Abe Adebisa is getting ready.

As a civil engineering student, Adebisa is using a virtual snowplow simulator to study the impact of snow on roads from the perspective of the plow's driver.

"The major difference between having something like this and playing a game is just the realism," he said.

He is one of a team of students and researchers at UC who hope to find better ways of training snowplow drivers. He said working with the snowplow simulator makes it feel like the real thing.

Ironically, as a native of Nigeria, he doesn't have a lot of experience with snow in real life.

"I just moved to Cincinnati like one year ago," he said. "So I've only had one snow season."

He's getting his feet more than wet – they're snowy as he takes part in research that will eventually be used by the Ohio Department of Transportation. The state needs a way to more efficiently train its snowplow drivers any time of year.

Through a nearly $1 million grant from ODOT, UC recently received a trailer that houses the simulator. The three-year research project and pilot program uses the simulator to teach snowplow drivers how to operate the plows and drive in adverse conditions. It's necessary because the state is losing experienced and qualified plow drivers, leading ODOT to hire about 350 new plow drivers each winter.

"Every year we have to use something called auxiliary drivers," said Dr. Jiaqi Ma, the academic director for the Greater Cincinnati Advanced Transportation Collaboration and lead researcher on the project.

Ma said sometimes the state's plow drivers are ODOT workers or others who sign up to drive plows but don't have a lot of experience.

"Snowplow driving is a very complex task," he said. "You have to maneuver this truck, which is not easy by itself. You will have to drive under adverse weather conditions," such as bad visibility and slippery pavement.

Ma said training the drivers throughout the year makes more sense than waiting for the first snowflakes to fall.

"Usually at that time, they have to go out and plow the road," he said. "We don't have time to train those drivers."

The simulator at UC is designed to give drivers a virtual 3D experience of driving a snowplow. It includes movement, sounds, night and even blizzard-like conditions. If the driver is sliding on ice, he or she will feel that in the simulator.

"You can kind of feel that it's moving," Adebisa said. "That's one of the things that makes it more realistic."

What will be different from other simulators in use around the country is what the driver in training will see. Ma and his team are collecting actual visual data so that the video screens will be identical to the streets and surroundings on the snowplow routes.

"This is actually being done for the first time in the country," Ma said. "Usually, when we train snow and ice drivers in such a simulator, we sort of use some generic scenarios, generic environments, just training their basic skills."

"When drivers go out to the field, they still have to face those complex situations due to the specific route," he said. "So what we are doing with ODOT is create ODOT-specific routes. We worked with three ODOT district offices and we selected about 200 miles of key road segments."

For now, the pilot program will be focused on an ODOT district in Lorain County in northeast Ohio.

"In district three, Lorain County, they have some great needs of experienced drivers. But they don't have it," Ma said. "They're losing drivers."

Ma said it will take at least a year to program the simulator with the routes specific to the roads in Lorain County, which will include city streets and interstate highways.

"We will make sure that model integrates well with our hardware simulator, and then we will do a few rounds of testing and then we will start working with district offices to train their drivers," Ma said.

Adebisa will work with the drivers as they train and he will collect behavior analysis data. He will also do research on the effectiveness of the program.

"What's going to be the benefits if we invest this amount of money over the next 15 years? What should we expect in terms of reduction in crashes, safer roadways?" said Adebisa, who doesn't have to wait for the real snow to begin falling.

He drives in it several times a week.