'This is big, and we're super excited' 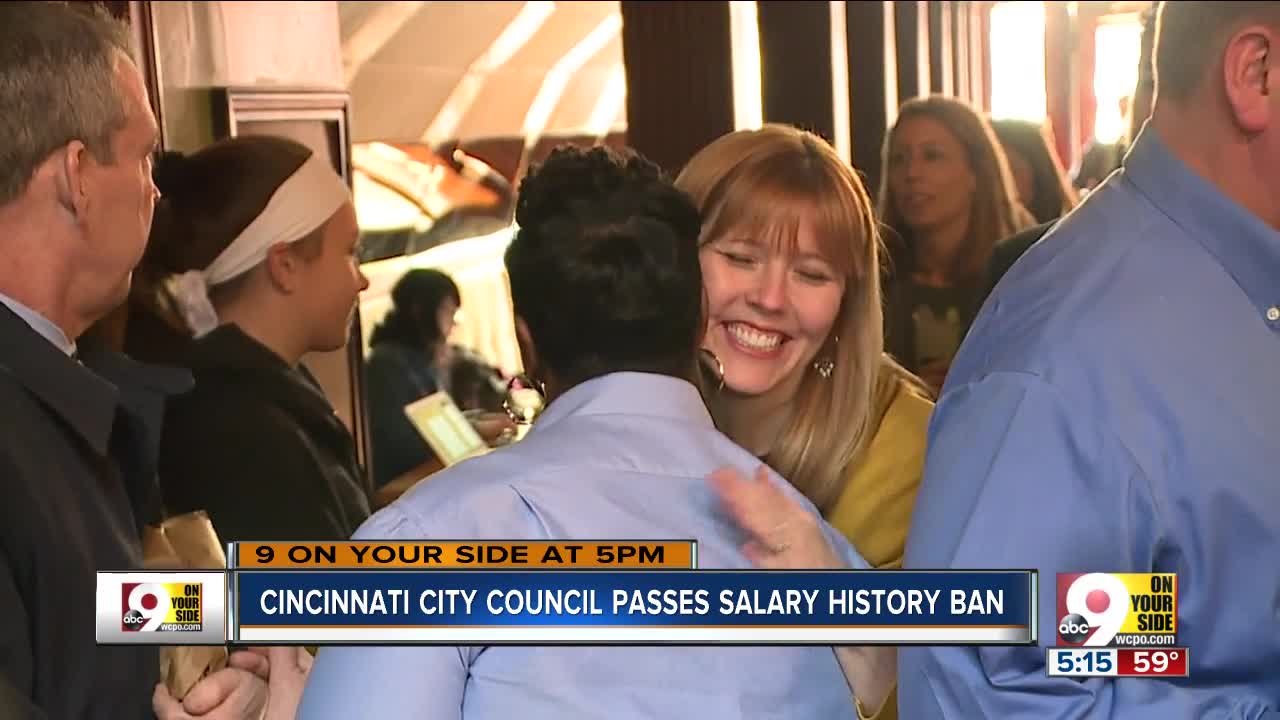 When the measure takes effect, it will be illegal for public and private employers in Cincinnati to ask potential employees about their pay history during the hiring process.

CINCINNATI — Priya Klocek was just starting her career when she got an entry-level job at Convergys Corp. in 1998.

Because she was a recent college graduate and didn’t have much experience, she began at a low starting salary.

However, she was quickly identified as a "high-potential" employee, she said, and got promotion after promotion. It wasn’t until she became a manager in the company’s recruiting division that she learned exactly how her low starting salary had impacted her.

“I found out that a recruiter that reported to me made $10,000 a year more than me,” said Klocek, who is now president and CEO of Consultant On the Go, LLC. “I was doing the same work for less money but outperforming others, especially a lot of my peers who were men.”

Convergys finally adjusted Klocek’s salary after she threw what she calls “a hissy fit,” she said. That didn’t undo the damage of being underpaid for years.

“What bothers me, when I think about retirement and social security and pension, is how has that now impacted me for the rest of my life?” she said.

Across the United States, women on average are paid 80 cents for every dollar that men earn, according to 2018 data from the National Women’s Law Center. Over a 40-year career, that wage gap costs women more than $403,000, according to the center.

The city of Cincinnati hopes to narrow that gap locally with a new Salary Equity Ordinance.

Cincinnati City Council passed the ordinance March 13. When the measure takes effect in March 2020, it will be illegal for public and private employers in Cincinnati to ask potential employees about their pay history during the hiring process, including in job ads, on applications or during interviews.

“We have these ridiculously high rates of poverty. People are in poverty because they can’t make enough money,” said Councilwoman Tamaya Dennard, who championed the legislation. “When their wages are up, when they’re making more, ultimately we all benefit. People are going to get what they deserve, what they’re qualified for, not necessarily what they used to make. I think that helps a lot.”

As of late February, 11 states and the commonwealth of Puerto Rico had adopted statewide bans that make it illegal for employers to ask about salary histories, and 11 cities and counties have adopted bans of their own, according to the website HRDive. Two states — Michigan and Wisconsin — have passed laws that prohibit local governments from passing a salary history ban, HRDrive reported.

Philadelphia was the first city in the nation to adopt a salary history ban in January 2017, but the Chamber of Commerce for Greater Philadelphia and some of the city’s biggest employers challenged the ban in court.

A federal judge ruled last April that Philadelphia employers can ask job candidates to give their salary histories but cannot use that information to set their pay.

Katie Eagan, the vice president of government affairs for the Cincinnati USA Regional Chamber, raised concerns about that lawsuit when she spoke about the ordinance during a Feb. 12 meeting of City Council’s Equity, Inclusion, Youth & the Arts Committee.

She told WCPO that she remains concerned about the ordinance that council passed, largely because of the unresolved federal case in Philadelphia.

The measure requires council to establish a working group to help Cincinnati employers understand the ordinance and what it means over the next year.

Once it takes effect, the ordinance gives employees the right to sue Cincinnati employers that violate it.

“The chamber and the chamber’s members are for wage equity, and we’re for working toward that,” Eagan said. “I think this is a community issue, and it deserves community solutions, and we wish that the business community would have been viewed as a good-faith partner in this instead of council passing overly punitive ordinances.”

Dennard said the measure should be viewed as a win for both employers and employees. Workers who earn more, she said, can support themselves and their families better and contribute more to the community in taxes and purchasing power.

“A lot of times people are afraid that doing something that’s good for the community will result in something that’s bad for business,” she said. “And what we wanted to show is it doesn’t have to be an either-or proposition.”

The ordinance will apply to any employer with 15 or more employees, and Cincinnati employers have a year to make the necessary changes to come into compliance.

Eagan said that raises questions for small businesses that are just below that threshold.

“If you have 12 employees and you do well and are able to hire three more, all of a sudden this applies to you,” she said. “If you have a small business where you have 15 employees, often times the owner is also a salesperson and an HR person. They don’t have the compliance staff that other businesses do.”

Cincinnati City Council passed the measure by a 6-2 vote.

Advocates pointed out that many local employers already have the policy in place.

The Procter & Gamble Co. does, for example, as do smaller local employers including the Cincinnati Symphony Orchestra, Cincinnati Zoo & Botanical Garden, Corporation for Findlay Market, Children’s Home of Northern Kentucky, Girl Scouts of Western Ohio, pep promotions, Public Allies, Urban Artifact and Women’s Crisis Center. The city of Cincinnati also is "actively working with its Department of Human Resources and various city agencies to ensure compliance with the ordinance," according to a statement the city gave WCPO.

The zoo simply removed any questions about current or prior salaries from its job applications and doesn't allow the question as part of its interview process or job offer negotiations, said Jeff Walton, the zoo's human resources director.

"We feel that these steps have created a more equitable environment and help prevent us from contributing to pay equity issues that may have occurred in a candidate's past employment," he said in an email to WCPO.

The Society for Human Resource Management has recommended negotiating salaries in other ways, noted Meghan Cummings, executive director of The Women’s Fund of the Greater Cincinnati Foundation.

“Human resources professionals have traditionally relied on past salaries for gauging the minimum they could pay a candidate,” Cummings told the Equity, Inclusion, Youth & the Arts Committee during a March 12 meeting. “It’s better to negotiate salary based on asking a candidate what his or her expectations are. SHRM asserts that salary history should not be a factor in setting compensation.”

Management consulting firm McKinsey & Company has conducted research that suggests men are often hired and promoted based on their potential whereas women are hired based on their track record, said Nicole Armstrong, the founder of Queen City Certified, an organization that works with businesses and government agencies to improve gender equity.

“Women start from behind, and then they continue to have that gap as they go through their careers,” Armstrong said. “Not asking about salary history is one of the policy practices that we strongly recommend to our employers.”

“We hadn’t thought to do otherwise,” he said. “We knew it was the right thing to do.”

The company has more meaningful ways of figuring out how much to pay its 25 employees, he said.

“We isolate what that job is worth to us first, and then we go out to look for the right people to fill it,” Hand said. “In theory, it could eliminate people who had a really high-paying job before. But it also allows us to bring people up on an equal footing to what it’s worth to our business.”

Hand said he and his business partners have never thought the practice hurt the business. Urban Artifact went through the Queen City Certified process and aims to reach the organization’s highest level of gold certification within two years.

“Craft beer has kind of this identity issue where people think that it’s for specific groups of people, and we completely disagree with that,” Hand said. “We want to make sure it’s an easily accessible thing for anyone.”

For her part, Klocek said she doesn’t believe one ordinance can address all problems in the workforce when it comes to pay disparities.

She now does a lot of consulting work in the field of unconscious bias and cross-cultural competency, and she said she knows there are many complex factors at play in how employees are paid and perceived.

Even looking back at her own experience, Klocek said she doesn’t regret her more than seven years at Convergys.

“I would not be where I am in my life if it wasn’t for that experience,” she said. “It was probably one of my best corporate experiences.”

However getting compensated fairly should be part of the deal for employees, she said, and the ordinance passed by City Council can be an important step in that direction.

Dennard said she is confident the measure is just what Cincinnati needs.

The full text of Cincinnati’s Salary Equity Ordinance is available below.

Dennard_Salary Equity Ordin... by on Scribd