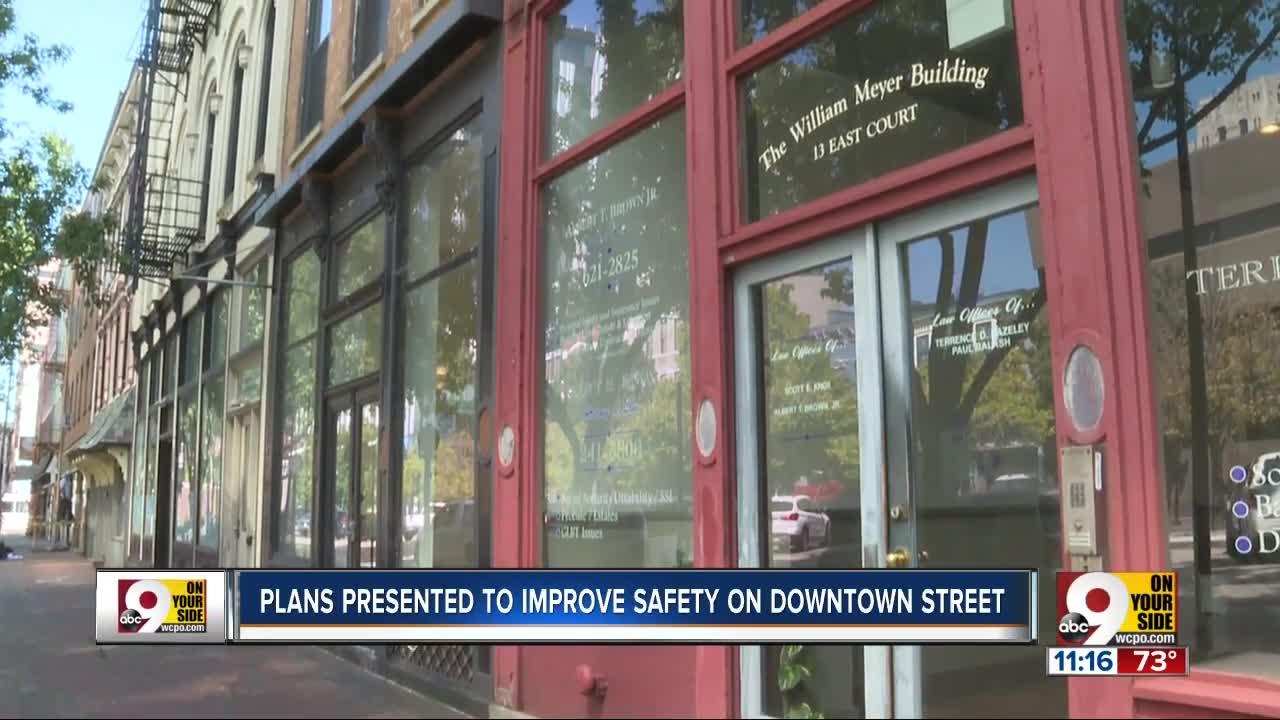 The blocks between Vine and Walnut, near Court Street, are being examined as areas for improvement.

CINCINNATI — On Monday, the Downtown pedestrian task force presented plans to increase safety and make the blocks between Vine and Walnut more vibrant.

One glance around that area reveals crumbling sidewalks, degraded roads and danger hot spots where pedestrians have been injured in accidents with vehicles. The pedestrian task force is looking at these areas as spaces to improve, but local businesses aren't fully convinced they're on board with the proposals.

"The current situation on court street is not good," said Derek Bauman, with the pedestrian task force. "It really presents a dead space between fountain square and downtown."

The group's new rendering of proposed plans transforms the area, moving the roadway to the middle of the block and adding larger sidewalks. Bauman said the new plan will make the area more pedestrian-friendly and support programming that can help local businesses.

"The sidewalks are improved, the crosswalks are shorter," said Bauman. "They're colored and different things like that to really make it stand out."

But some businesses along those city blocks don't support the proposed changes. The plan would decrease parking on the block by about 30 spaces, which business-owners feel would hurt traffic and business in the area.

"The goal is to make it prettier, but it's by a courthouse, there's lawyers, there's businesses," said Scott Knox, with Knox Attorney's at Law. He said he believes the changes would hurt every small business along Court Street.

"We're successful businesses if they leave us alone and don't mess with our parking," he said.

Bauman disagrees, and says the key to success will be getting long-term parkers to use other options like parking garages, leaving limited metered spaces for those visiting the small businesses.

"There is a new lot at the corner of Central Parkway and Walnut just steps away from court street and we have the parking garage that is part of the new Kroger store and the apartments,” said Bauman.

The plan isn't finalized yet, and the task force is asking the city for more than $100,000 to study parking issues along the Vine and Walnut blocks. They're hoping that solving the parking issues can help re-vamp the area for safety, while minimizing the changes that may affect business in the area.