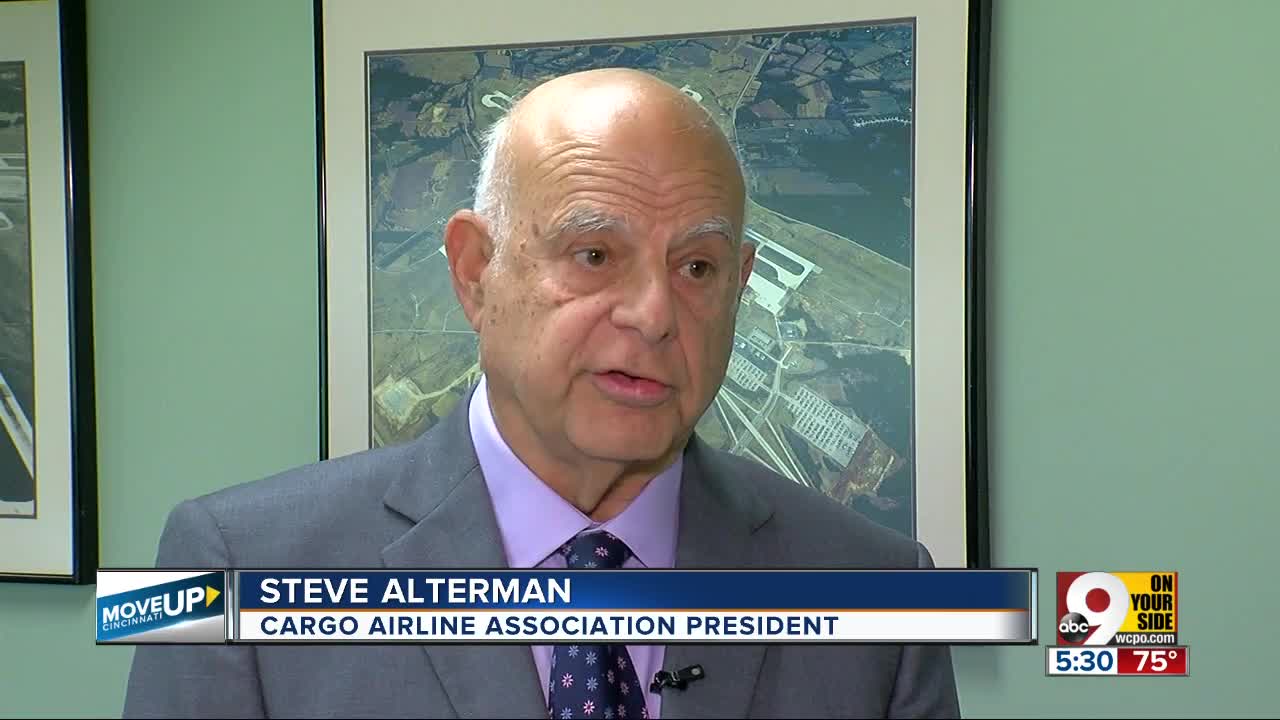 The Cincinnati/Northern Kentucky International Airport is attracting attention from the air cargo industry as its growth outpaces airports around the country.

"We have been the fastest growing cargo airport in the U.S. for the last three years," CVG CEO Candace McGraw said. "We are now the eighth-largest cargo airport in North America, and that growth continues."

CVG executives hosted air cargo industry professionals during this week at 2019 Air Cargo Symposium, an event coinciding with National Aviation Week. More than 100 people, including included representatives from UPS, FedEx, DHL and others in the air cargo industry, attended the event at CVG Centre in Erlanger.

"It's so important in terms of creating economic opportunities, and that's why I'm here," said U.S. Rep. Thomas Massie of Kentucky District 4, noting that the Amazon air hub being built at CVG is expected to bring in thousands of jobs.

"I believe that's going to drive other companies to want to locate here so that they can get into that pipeline that Amazon provides to consumers even sooner and cheaper," Massie said.

CVG is already home to DHL's North American super-hub, which handles international shipments. More than 700,000 tons of cargo pass through the airport annually.

"In terms of an area that is really exploding in terms of cargo, CVG is probably the prime example," said Steve Alterman, president of the Cargo Airline Association, a Washington, D.C.-based trade association that works on behalf of cargo airlines and those in the air cargo industry. Alterman said CVG has become of epicenter of air cargo growth.

"In terms of what's going on in terms of development and growth, I think that this area is really the star of that," he said.

Meanwhile, the challenges faced by companies in the air cargo business include finding faster ways to get packages to their final destinations. Many businesses are exploring drones as a possible answer.

"UPS has just been certified by the FAA to deliver packages by drone. Amazon has an application at the FAA to do that," said Alterman.

Massie agreed. He said the federal government has been "dragging its feet" on establishing rules around drones and how they can be used for deliveries.

"FAA needs to step up to the plate and make sure there's a level playing field and everybody understands what the rules are," Massie said. "Ultimately they have to get it to somebody's house. That's the last mile, and sometimes that part of it is more expensive than flying the cargo across the country."

Meanwhile, CVG continues to see residual growth from air cargo business. A 103,000-square-foot hanger is under construction now by Feam Aero. It will be used for maintenance, repair and overhaul of 747-800 cargo jets when it opens in 2020. The company expects to hire about 100 workers.

In addition, Atlas Air recently announced plans to build a facility in Erlanger. The company is contracted to fly for DHL and Amazon. Atlas Air expects to open in 2021 and plans to hire 600 workers over 10 years.