Can Cincinnati have gentrification and enough affordable housing at the same time? 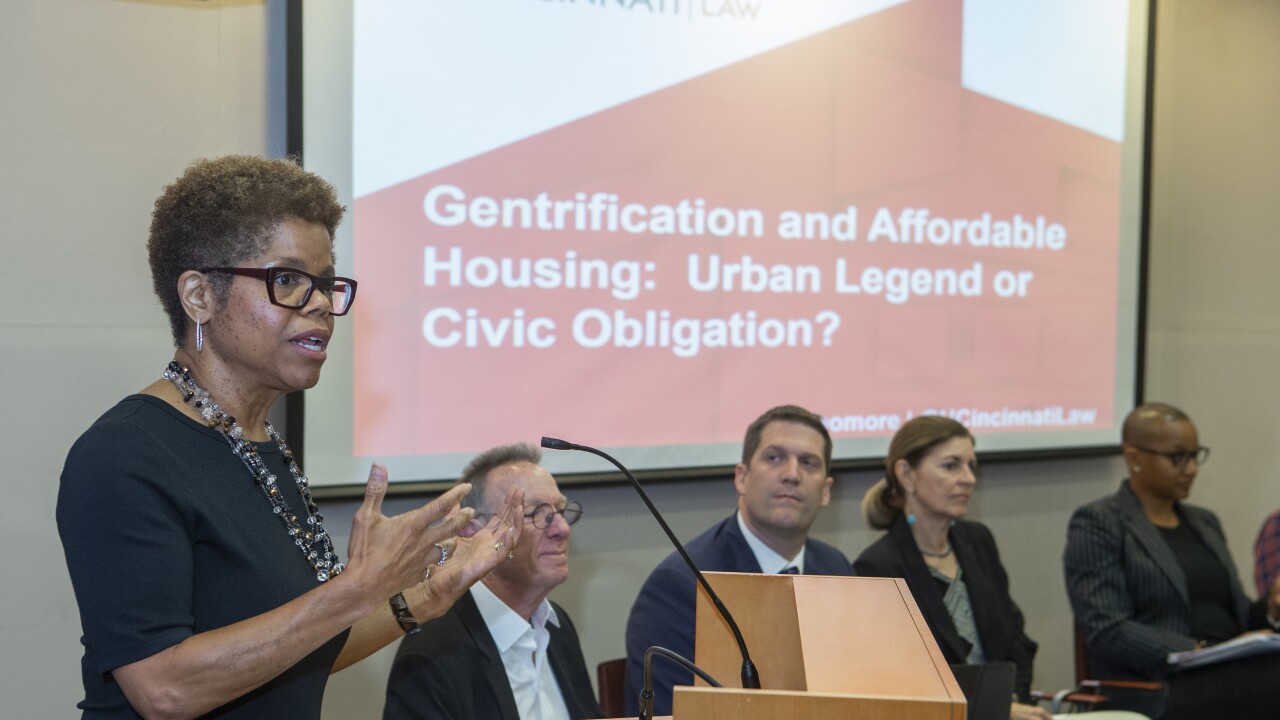 UC/Joseph Fuqua II
Verna L. Williams, dean of University of Cincinnati&#39;s College of Law, spoke during a discussion about affordable housing at the Taft Law Center in downtown, Cincinnati.

CINCINNATI — When it comes to redeveloping Cincinnati’s urban neighborhoods, decision-makers of all kinds are struggling to answer the same question.

Is it possible to have gentrification in a neighborhood while at the same time keeping enough quality, affordable housing that low-income residents aren’t forced out?

The University of Cincinnati College of Law gathered a group of local and national experts this week at the Taft Law Center Downtown for a roundtable discussion to explore those housing concerns and try to identify new approaches.

“Gentrification and affordable housing are not necessarily incompatible,” College of Law Dean Verna Williams said at the start of the discussion. “We’re here with an eye toward generating ideas to move us forward.”

Flynn noted that people with disabilities are impacted by a lack of quality, affordable housing more than any other demographic group.

Among people with disabilities who are trying to work, the unemployment rate is about 25%, he said.

“You’ve got very low incomes among this group of persons with disabilities,” he said, and a very small percentage of affordable housing is fully accessible for people with disabilities because much of it was built before the Americans with Disabilities Act was passed. “So now you’ve got a disproportionately high percentage of a population needing low-income affordable housing and a disproportionately low availability of units."

The work could affect hundreds of thousands of local residents living in housing that consumes an out-sized chunk of their income.

“Hopefully it will be a 10-year plan adopted by the city and county to change the landscape about the way (affordable housing) is funded and the way policies are made,” she said.

The rule of thumb is that housing costs are “affordable” if they consume no more than 30 percent of a family’s household income.

Under that definition, Cincinnati is one of the most affordable cities in the nation, Erikson said.

However, he suggested it might be more accurate to consider other costs, too, such as how much families have to pay for transportation, food and child-care.

“Let’s subtract that from their income and see what’s left,” he said. “If we look at that in Cincinnati, instead of being one of the best, we’re not so high anymore. We have high transportation costs, high cost-of-living areas.”

Are unions the answer?

The biggest barrier to developing more affordable housing is there aren’t many sources of funding that developers can use to help cover the costs of developing properties that won’t collect high rents, Maly said.

“Folks are not economically incentivized to build housing at a loss,” he said.

Eichner said his company tackled the problem in New York City by approaching labor unions to get their help to build what he called “workforce housing.”

That’s housing that is affordable for families that earn between 80% and 120% of an area’s median income. In Greater Cincinnati, that range would cover household incomes between about $64,000 and $120,000 per year, Eriksen said.

“No one had built any housing for that population since the mid-1970s in New York,” Eichner said.

So he approached unions and asked if they would finance the development using their pension funds. Eichner said his company pledged to use union labor for the project and to build it on private land.

“The unions issued a $550 million commitment to build housing,” he said.

A portion of the development was designed as “workforce housing,” and other units will be affordable for families with lower incomes, he said.

“I concentrated on trying to address a piece of the problem — workforce housing,” he said. “That template is replicable. The unions would do a project like that any place there is a significant union presence.”

Gaynor suggested that political leaders should be sure to consider neighborhood residents’ needs instead of solely focusing on incentives for developers.

“There are companies that are enticed to come into communities,” she said. “There are tax incentives situated around that. So think about, instead of giving tax abatements, can these companies contribute to the affordable housing trust, and what that might look like.”

Bottom line, Gaynor said: “Private industries take resources from communities. It’s only right that they give resources back to the communities in which they are housed.”

Williams encouraged the expert panel and the several dozen people in attendance to come up with ideas for what Cincinnati and Hamilton County could do next to address the issue.

Schwab invited the group to reconvene and offer ideas and suggestions for the affordable housing plan that she is working to shape.

“That will end hopefully at the end of this year with policies to roll out next year,” she said.

More information about the community-wide housing strategy and how you can get involved is available online.