Artificial intelligence could have a real impact on Cincinnati's economy 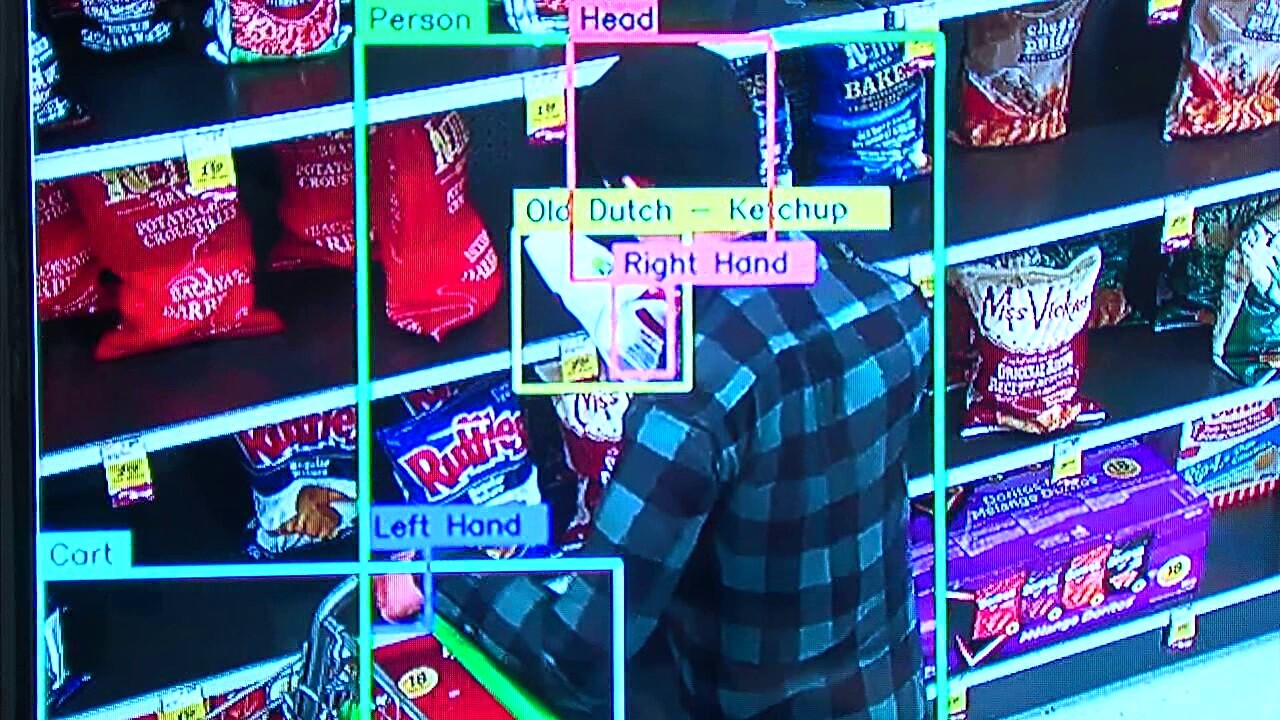 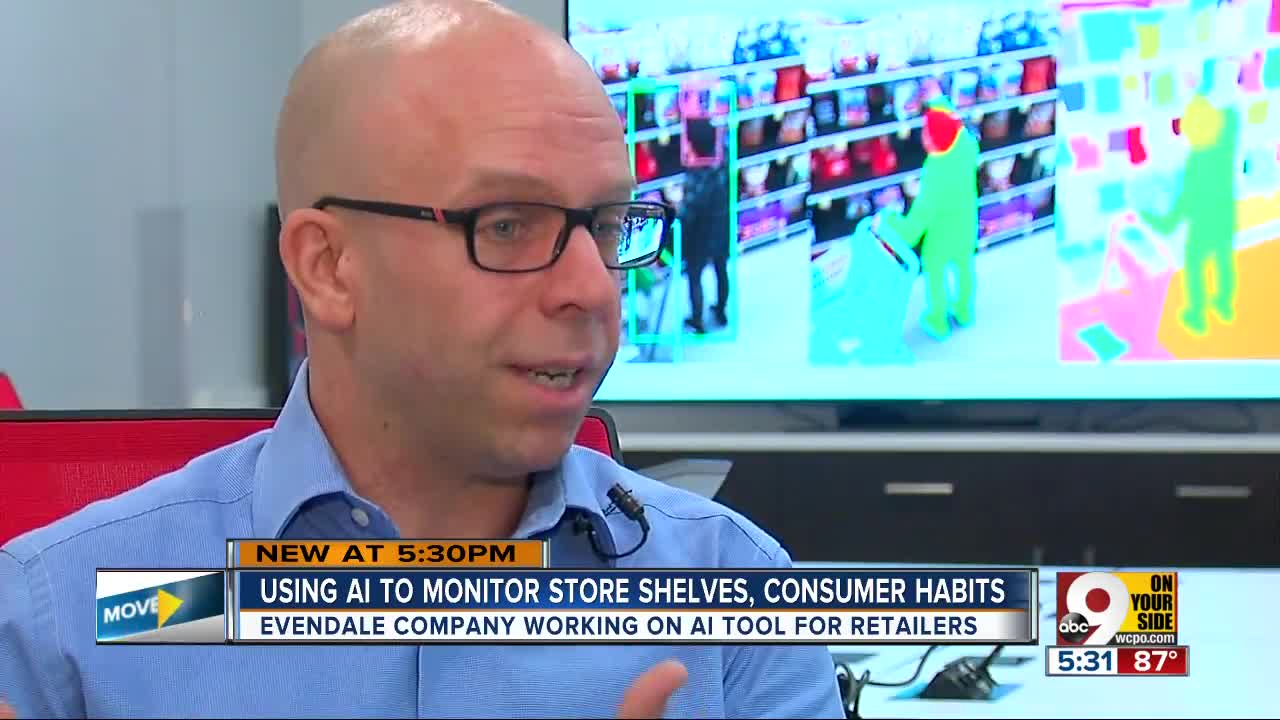 EVENDALE, Ohio — The problem is real. The solution is artificial.

ShelfVision is a virtual-reality tool that uses artificial intelligence to monitor store shelves for product shortages, potentially solving a $1 trillion problem for retailers globally. Evendale-based Kinetic Vision Inc. is testing the product for retail clients it is not allowed to name. It’s the latest in a growing list of AI innovations targeting the retail industry.

“They perform these repetitive manual labor tasks so much faster,” said Greg Sweeney, an AI software engineer at Kinetic Vision. “We can deploy these models, have them assist humans in performing what’s repetitive: Checking for stock outs on a shelf, knowing which shelves to restock first, knowing when and how often products are displaced. Which products are most popular? Which locations are most popular? All of that can be determined automatically with an algorithm like this.”

The use of such technology is exploding in retail. A study released in April by UK-based Jupiter Research predicts global spending by retailers on AI services will rise 230 percent to $12 billion in the next four years. The study predicts store owners will increasingly use artificial intelligence to power stores without cashiers, a concept now being tested by Amazon Inc. and Walmart Inc. AI tools are increasingly used to forecast consumer demand.

“With the rise of collect-in-store and one-off events such as Black Friday, understanding demand and supply chains is more crucial than ever with AI playing the central role,” said Nick Adams, author of the Jupiter Research study.

The Kroger Co. has been using artificial intelligence applications since 2014, when it debuted QueVision, a predictive analytics program that tells store managers how many cashiers are needed to reduce customer wait times. Kroger’s robot warehouse partner Ocado will use another form of AI known as machine learning to power the $55 million distribution center now under construction in Monroe.

"When you have a thousand robots all moving within 5 millimeter tolerances of each other, they need to learn all the time what they're doing, how to do it faster, how to do it more efficiently," Ocado Solutions CEO Luke Jensen told WCPO in June. "That includes placing grocery items in the right place “so the robots can access it more effectively."

Sweeney said the ShelfVision system recreates a store environment virtually with data that represents every shelf and every item that might be displayed on that shelf. Then it sifts through photos and videos on a real-time basis, looking for changes in that environment. It’s the same job George Whipple once performed in the 1960s-vintage Procter & Gamble Co. commercials that playfully urged shoppers not to squeeze the Charmin.

Now, a computer can watch the store 24-7, alerting managers if anyone picks up toilet paper -- or if a winter storm sparks a run on snow shovels or water is in short supply during a heat wave.

“In deep learning artificial intelligence models, we set up our algorithms to perform like a human brain,” Sweeney said. “We even use the same terminology. The data nodes are called neurons and they make connections with each other. They activate each other. And a series of activations produces a result, a prediction. Like, ‘What am I looking at on this retail shelf?’”

Retailers definitely can use more help in monitoring store shelves. A 2018 study by IHL Group estimated retailers worldwide lose $984 billion in sales annually by not having merchandise in stock when consumers want to buy it. North American retailers lose $144.9 billion from the problem. They waste another $24.2 billion on “safety stock.” That’s extra inventory that retailers keep on hand to make sure they don’t run out. Adding insult to injury, IHL estimates “upwards of 24 percent of Amazon’s current retail revenue comes from customers who first tried to buy the product in-store.”

ShelfVision is mostly being used to track out-of-stock incidents at this point, but there are thousands of potential applications for the technology, including theft prevention and testing how consumers respond to price changes and other marketing strategies, said Jeremy Jarrett, a senior vice president at Kinetic Vision.

“Brick and mortar retail is here to stay,” Jarrett said. “But it has to change. And it has to be more relevant.”

Of course, artificial intelligence is permeating more professions than retail. Driverless cars and smart speakers, once novelties, are turning into norms. Procter & Gamble Co. has baked artificial intelligence into Oral B tooth brushes and Gillette razors, among other products. Even insurance companies and hospitals are using AI tools to personalize their offerings for consumers, said David Adams, chief innovation officer at the University of Cincinnati.

“If you think of how consumer behavior has been looked at in the past, it’s been in aggregate,” Adams said. “What’s happening not just in retail but in medicine and across the board, we’re starting to get into what’s generically called personalization. With the introduction of sensors and AI and big data and the technologies to be able to support this, we’re moving into an environment now where (companies) want to understand, ‘What does Dan want?’ As opposed to Dan’s demographic.”

UC is trying to play an active role in this movement with its 1819 Innovation Hub, which pairs companies with academic teams to explore new technology. Kroger, for example, worked with a team of UC interns his year to build a smart refrigerator prototype that can automatically reorder when the milk, cheese and dairy goods run low.

Adams said the innovation hub's goal is to solve business problems and cultivate the next wave of AI specialists who will drive innovation for Cincinnati companies in the future.

“They’re not just leveraging this from the tech talent that’s coming out of the University of Cincinnati, although that’s a really important component,” Adams said. “But as they recruit experienced hires to Cincinnati as well, 1819 is going to be a key stopping point in that journey to illustrate the kinds of opportunities that are going to be available to that talent.”

Jarrett said AI projects have already created a handful of new jobs at Kinetic Vision, a 30-year-old company with about 140 employees. Its team of engineers and designers mostly work on new product ideas and packaging innovations. But Jarrett expects artificial intelligence, which now accounts for less than 5 percent of its business, to reach 50 percent in the next several years.

“All the technology is brand new,” he said. “Everybody knows they need it. But nobody knows exactly what they need. The first step of that is innovation. I have all these great blue sky ideas. How do I funnel that down to something I can use to make my work faster or better or delight the customer in a different way?”