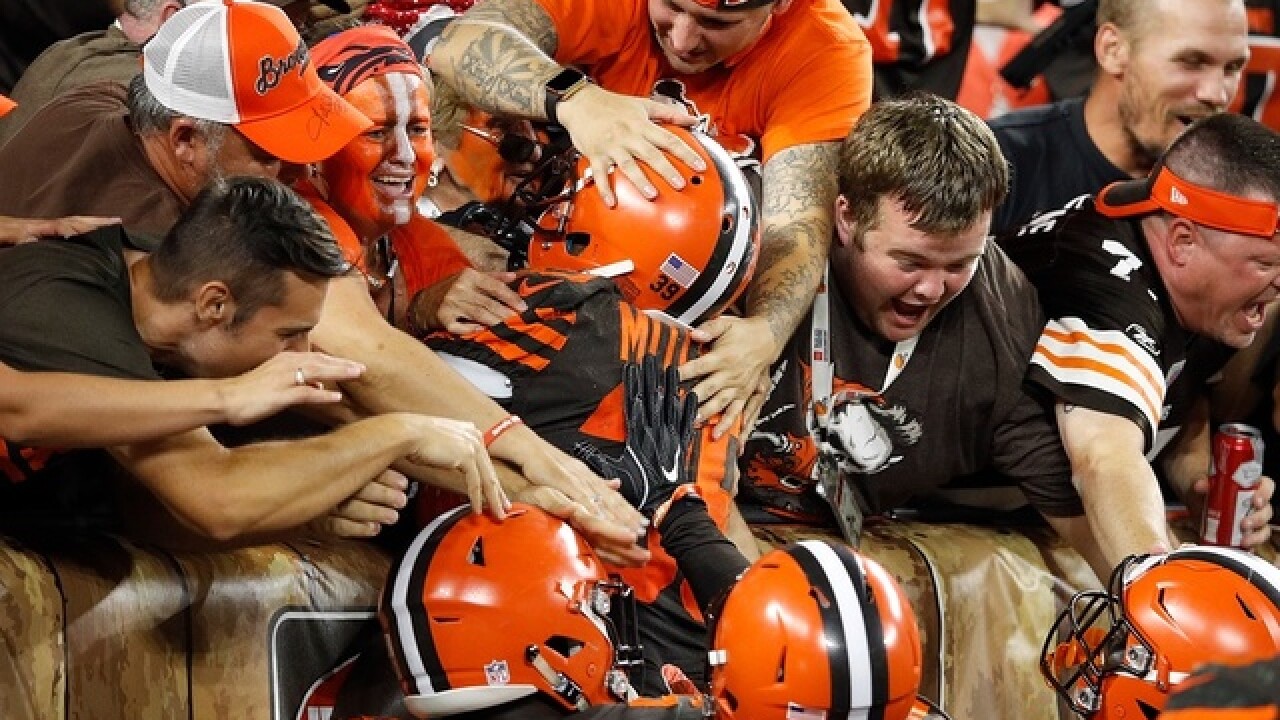 Image copyright 2018 Getty Images. All rights reserved. This material may not be published, broadcast, rewritten, or redistributed.
Joe Robbins
<p>CLEVELAND, OH - SEPTEMBER 20: Terrance Mitchell #39 of the Cleveland Browns celebrates his interception with fans during the fourth quarter against the New York Jets at FirstEnergy Stadium on September 20, 2018 in Cleveland, Ohio. The Cleveland Browns defeated the New York Jets 21-17 for their first win in 635 days. (Photo by Joe Robbins/Getty Images)</p>

CLEVELAND (AP) — At some point, Baker Mayfield was going to assume Cleveland's starting job and become the franchise quarterback, the future.

His days as a backup are over.

Throwing a 14-yard dart to complete his first pass, Mayfield replaced an injured Tyrod Taylor and rallied the Browns from a two-touchdown deficit for a 21-17 win over the New York Jets to end Cleveland's 19-game winless streak — the NFL's second-longest in 48 years.

Mayfield erased any doubts about why the Browns selected him with the No. 1 overall pick in this year's draft with a performance that included him catching a 2-point conversion. The undersized and overlooked kid from Texas who walked on at two colleges, won a Heisman Trophy and became one of college football biggest stars, had some NFL debut.

"He's really special," Browns receiver Jarvis Landry said. "He took advantage of the moment and the opportunity. We always have seen him make these plays. As far back as when the Baker Mayfield story started, he has always made these types of plays. It is awesome to be a part of it."

Mayfield came in after Taylor sustained a concussion late in the first half and led the Browns (1-1-1) on four scoring drives — the last a 15-play, 75-yarder capped by Carlos Hyde's 1-yard TD run — and Cleveland's defense intercepted two passes by Jets rookie quarterback Sam Darnold in the fourth quarter to seal the team's first win since Dec. 24, 2016.

Following the game, jubilant Browns fans walking down the ramps of FirstEnergy Stadium chanted "Ba-ker, May-field" at the top of their lungs.

Their new hero took it all in stride.

"I have just been waiting for my moment," said Mayfield, who completed 17 of 23 passes for 201 yards. "I have been patient. I have been in a good opportunity, put in a good situation with the guys around me — veteran QBs and great coaches that I can learn from. I was never whining or complaining about playing time. I just want the team to win, no matter what the cost is."

The Browns wanted to bring Mayfield along slowly by having him watch and learn behind Taylor.

That plan is about to be scrapped.

Although Cleveland coach Hue Jackson wouldn't commit to Mayfield as his starter going forward, the choice is obvious. Mayfield isn't your average rookie quarterback and it's clear he's as ready as he can possibly be.

"I am not surprised by any throws that this young man makes," Jackson said. "He does things in practice that I just go, 'Oh, my gosh.' Timing. Timing is everything. The right time. The right situation. You can't deny the talent. You can't deny what he is able to do. He showed that tonight.

"That is why we drafted him. He has that magnetism. He has it. He is still a young player. He has a lot of work to do. He has got to keep working. Tonight is his night. It was his coming out party."

GO FOR 2: Down 14-12 in the third quarter, the Browns scored and then converted a 2-point play that seemed stolen from Philadelphia's playbook.

Running back Duke Johnson took the snap, gave the ball to Landry on a reverse and the receiver lofted a pass to Mayfield in the end zone. The play was reminiscent of the one the Eagles pulled off in last year's Super Bowl win when QB Nick Foles caught a TD pass.

"We call it the 'Philly Special'," guard Joel Bitonio said. "We saw Philadelphia run it in the Super Bowl and they said, 'Hey, we can do that.' The funny thing is that Tyrod has taken every rep on it so Baker has not ran it at all. First rep was a perfect rep, though. He did good."

Kicker Greg Joseph made a pair of field goals and an extra point in his debut for the Browns, who signed him Monday after releasing Zane Gonzalez, whose four misses cost Cleveland a win last weekend at New Orleans.

Joseph was even cheered as he went through his pregame routine during warmups.

CRUDE CROWELL: Jets running back Isaiah Crowell scored two touchdowns, but his unsuitable celebration of the second one drew him a 15-yard penalty and the wrath of his coach.

Following his 2-yard TD run in the second quarter, Crowell squatted in the end zone and pretended to wipe his rear end with the ball before throwing it into the stands.

Crowell played four seasons with Cleveland and his gesture appeared to be directed at the Browns.

Crowell said he got carried away.

"It was just passion and it wasn't a message toward anybody," he said. "You have to play the game with passion and that is the way I play. I did it so I have to accept whatever punishment comes with the celebration. I can't put my teammates in that position."