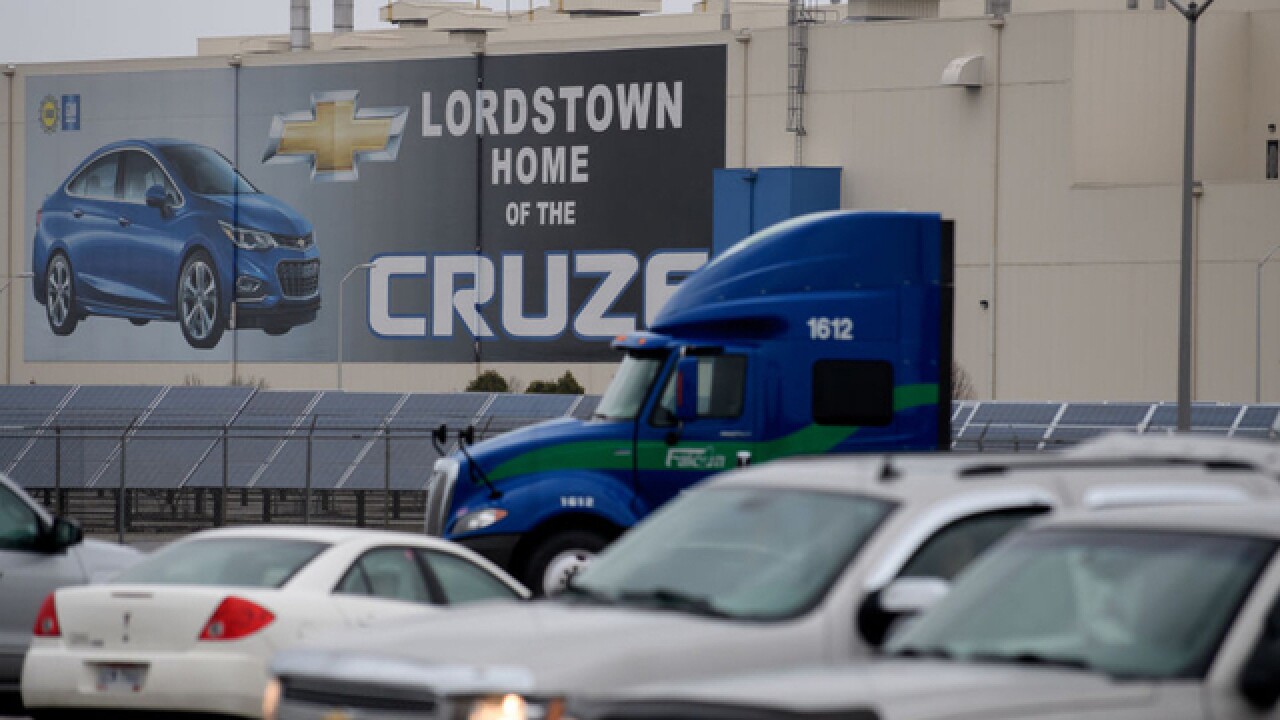 Image copyright 2018 Getty Images. All rights reserved. This material may not be published, broadcast, rewritten, or redistributed.
Jeff Swensen
<p>LORDSTOWN, OH - NOVEMBER 26: An exterior view of the GM Lordstown Plant on November 26, 2018 in Lordstown, Ohio. GM said it would end production at five North American plants including Lordstown, and cut 15 percent of its salaried workforce. The GM Lordstown Plant assembles the Chevy Cruz. (Photo by Jeff Swensen/Getty Images)</p>

LORDSTOWN, Ohio (AP) — General Motors is moving to shut down as many as five North American factories in a major restructuring, but there are more than jobs riding on the fate of at least one of them: Ohio's Lordstown assembly plant.

Ohio and much of the rest of the industrial Midwest were vital to President Donald Trump's campaign in 2016 and probably will be again in 2020. Trump ran on a promise to bring back factory jobs, and blue-collar voters in this otherwise Democratic stronghold in northeastern Ohio embraced him.

Trump blasted GM's announcement this week that it will shed up to 14,000 workers in North America. He threatened to cut off federal subsidies to the automaker and singled out the Ohio plant as one he wants to stay open.

"The U.S. saved General Motors, and this is the THANKS we get!" the president tweeted on Tuesday, referring to the government bailout of the automaker a decade ago.

Democrats and Republicans in Congress and union leaders are also pressuring the company to keep the plant running, in what's now a high-stakes decision for all involved, not just for the workers and the battered Rust Belt community nervously watching.

GM said Monday that Lordstown will stop making the Chevy Cruze by March, at a cost of 1,400 union jobs on top of the 2,700 lost there since Trump took office.

The plant is a focal point in the potential closings because of the president's pledge at a rally last year in nearby Youngstown, where he talked about going past big factories whose jobs "have left Ohio."

It was the kind of promise that endeared Trump to blue-collar workers in places like Youngstown and Lordstown, Democratic and labor bastions where Trump surprisingly won half the vote.

But it's also one that could haunt him with people who crossed party lines two years ago, said David Cohen, a political science professor at the University of Akron.

"You can't place all of the blame on Donald Trump, but he individually raised the stakes because he promised workers he was the only one who could save the manufacturing base," Cohen said. "And he can't win the presidency without carrying the industrial Midwest."

GM's attempt to close the factories still has to be negotiated with the United Auto Workers union, which has promised to fight back. The other factories that could go are assembly plants in Detroit and Oshawa, Ontario, and transmission plants in Warren, Michigan, and near Baltimore.

The UAW would especially like to save Lordstown because it employs the most workers.

Only one shift is still working at the plant after GM dropped two since the beginning of 2017. Some workers transferred to a plant in Tennessee, while others took buyouts or retired, but there are still nearly 700 in the area on layoff.

Keeping open a factory slated to close is not without precedent at GM, and Lordstown has been near death before and managed to survive. GM stopped making the Chevrolet Cobalt compact there in 2009 but negotiated with the union to bring in the Cruze.

"I think Lordstown's been on the bubble for quite some time," said Arthur Wheaton, a labor expert who teaches at Cornell University's Worker Institute.

But this time it feels more ominous for even longtime workers who have been through shutdown threats and job cuts, because now the entire industry is changing.

GM, like other automakers, is moving away from slow-selling cars and focusing on trucks and SUVS while also sinking money into new technology for self-driving and electric vehicles.

State and local governments are likely to offer tax breaks and other incentives to try to get GM to change its mind about the closings, said Kristen Dziczek, of the Center for Automotive Research, an industry think tank in Ann Arbor, Michigan.

"It's the state and locals that are going to be able to put icing on the cake," she said, pointing to big incentives extended to Foxconn in Wisconsin and Amazon in Virginia and New York.

All of this has left workers unsure what the future holds in Ohio's Mahoning Valley, once a proud steel-producing area where the GM plant is one of the few remaining industrial giants.

"It's like we're in a limbo now," said Bobbi Marsh, a 41-year-old single mother. "I've lived in this community my whole life. I bought the home my father and grandfather built. I don't want to move."