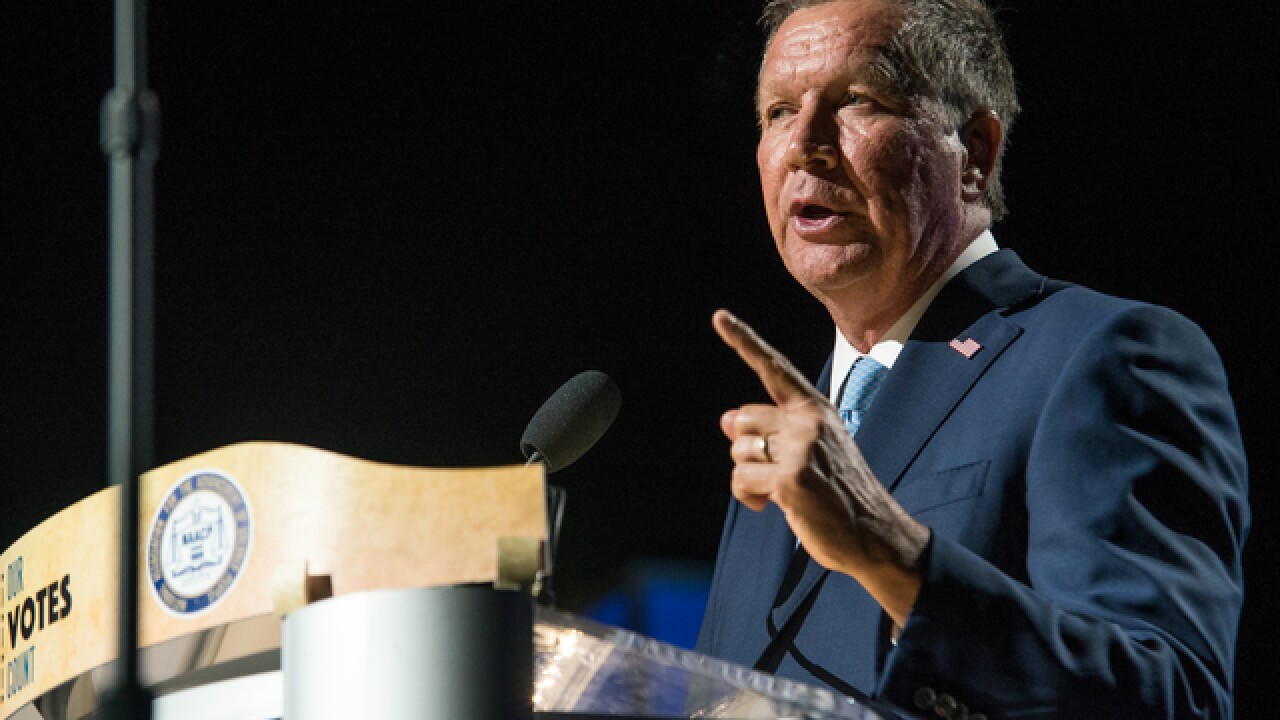 COLUMBUS, Ohio (AP) -- Republican Gov. John Kasich signed a bill Tuesday imposing a 20-week abortion ban while vetoing stricter provisions in a separate measure that would have barred the procedure at the first detectable fetal heartbeat.

Kasich acted on both proposals the same day they landed on this desk.

The so-called heartbeat bill would have prohibited most abortions once a fetal heartbeat is detected, which can be as early as six weeks into pregnancy - or before many women know they are pregnant. Its provisions cleared the Republican-led Legislature during a lame-duck flurry last week after being tucked into separate legislation.

Similar measures elsewhere have faced legal challenges, and detractors in Ohio feared such legislation would lead to a costly fight in the courts. Opponents predicted it would be found unconstitutional, a concern Kasich shared.

Kasich, an abortion-rights opponent, chose instead to sign off on a 20-week ban similar to those now in effect in 15 states and blocked from enforcement in two others. The measures are based on the assertion that fetuses can feel pain then. Opponents have challenged the "pain-capable" characterization as scientifically unsound. Ohio lawmakers rejected a Democratic amendment that would have added exceptions for rape and incest.

Ohio lawmakers still have the option to override his veto. Doing so would require a three-fifths majority of each chamber.

The developments in Ohio are a prelude to a broad offensive to be launched in January by abortion-rights opponents emboldened by the election success of Donald Trump and the Republican Party.

GOP lawmakers in numerous states - including Texas, Missouri, Iowa, Indiana and Kentucky - plan to push for new anti-abortion legislation. Their efforts are being supported by a national anti-abortion group, Americans United for Life, which released a report Tuesday contending that many abortion clinics are in violation of state health and safety standards.

In Congress, Republicans are expected to advance legislation banning most abortions after 20 weeks and halting federal funding for Planned Parenthood as long as it performs abortions. The president-elect has pledged to support both measures

The Republican-controlled Ohio Senate acted with initial caution on the divisive heartbeat bill before passing it suddenly last week.

Abortion-rights groups oppose it and Ohio Right to Life, the state's oldest anti-abortion group, has remained neutral because of constitutional questions.

The idea of its backers was to spark a challenge to the U.S. Supreme Court's 1973 Roe v. Wade ruling that legalized abortion up until viability, usually at 22 to 24 weeks, that would ultimately outlaw abortion nationwide.

Also on Tuesday, the Oklahoma Supreme Court threw out a law requiring abortion clinics to have doctors who have admitting privileges at hospitals within 30 miles of their facility.

The court ruled that measure, which requires doctors with admitting privileges to be present for abortions, violates both the U.S. and Oklahoma constitutions. Republican Gov. Mary Fallin signed it into law in 2014, but courts had blocked it from going into effect. The U.S. Supreme Court earlier this year struck down a similar provision in Texas.