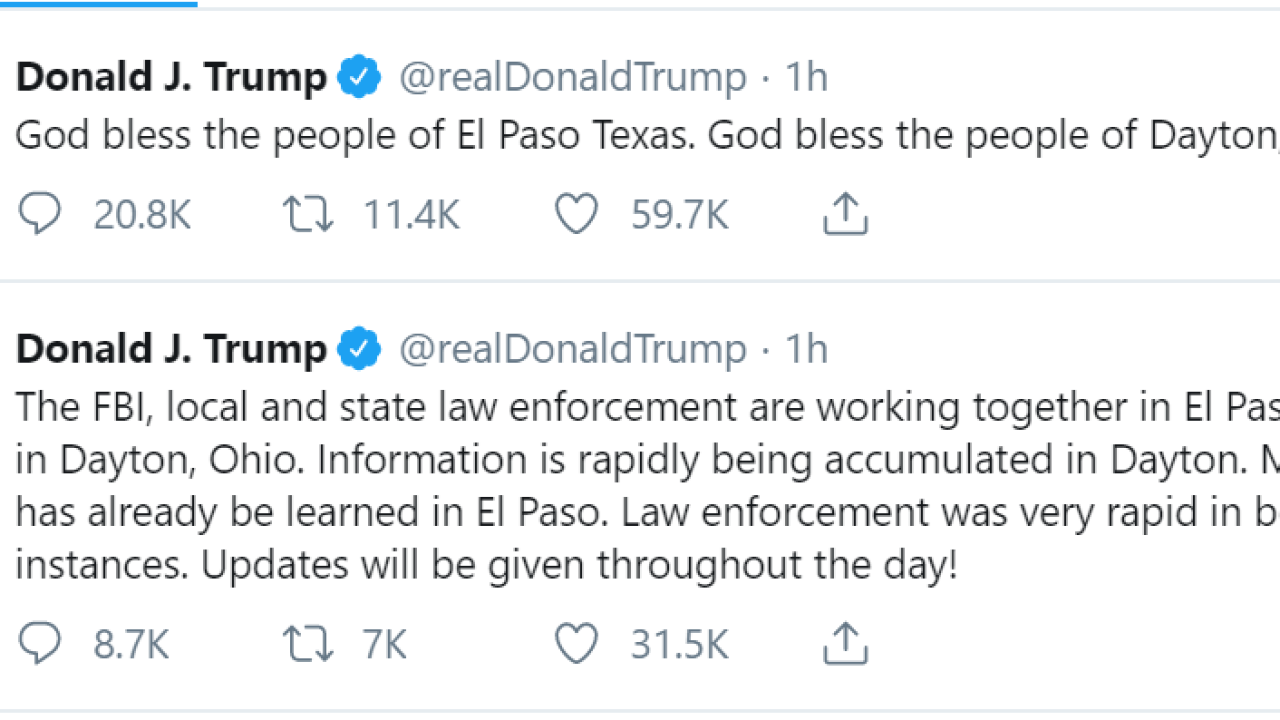 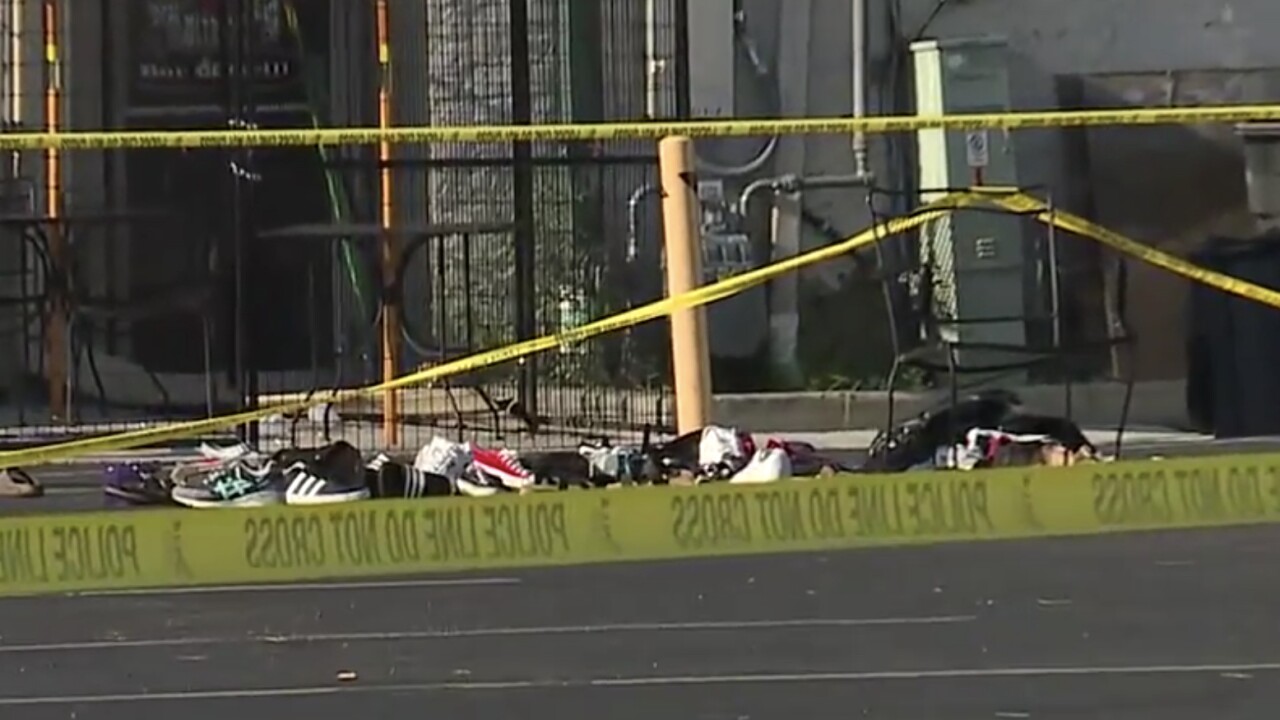 DAYTON — The president, state and local officials shared words of support for the people of Dayton, Ohio in the wake of a mass shooting that left 10 dead including the gunman.

"The FBI, local and state law enforcement are working together in El Paso and in Dayton, Ohio," Trump tweeted. "Information is rapidly being accumulated in Dayton. Much has already be learned in El Paso. Law enforcement was very rapid in both instances."

Vice President Mike Pence offered prayers for the families of victims on Sunday afternoon, adding there is "no place in America for acts of violence, hatred and racism."

"We condemn these evil acts & stand with the people of Texas and Ohio. May God bless you all," Pence tweeted.

We mourn with those who lost loved ones in El Paso and Dayton & are praying for the injured and the families. There is no place in America for acts of violence, hatred and racism. We condemn these evil acts & stand with the people of Texas and Ohio. May God bless you all.

Ohio Governor Mike DeWine said he is "heartbroken over the horrible attack" and has ordered flags across the state to remain at half staff to honor the victims.

"We join those across Ohio and this country in offering our prayers to victims and their families," DeWine said Sunday morning. "I commend Dayton Police and other first responders for their bravery and quick response to save lives and bring an end to this tragedy."

At a later press conference, Whaley recalled the 14 tornadoes that ravaged the Dayton area earlier this year. Whaley said unlike those tornadoes, this latest mass shooting "seems completely preventable."

"I just question when is enough, enough?” said Whaley.

I’m heartbroken. Thank you to our first responders for all that you’ve done. We will share updates as we have more information.

U.S. Senator Sherrod Brown (D-OH) said he feels "sadness for the victims and their families" but is angry that politicians "refuse to pass sensible gun-safety laws to protect our communities."

"We are still learning about the attack in Dayton and we don’t know exactly what, if anything, could have prevented this specific tragedy," Brown said. "But we know thoughts and prayers are not enough, we have a responsibility to act."

U.S. Rep. Mike Turner (R-OH) applauded Dayton police for "stopping this evil," and said his daughter and a friend were across the street when shooting began.

"My daughter & a family friend had just entered the Tumbleweed Connection when the shooting began across the street," Turner tweeted. "Both reported of the visible @DaytonPolice presence before the shooting and the bravery they witnessed as officers ran toward the gun shots."

My daughter & friend fled into #OregonDistrict & contacted me at 2am. As they ran home, I followed their progress & prayed for them & our community. Thank you to @DaytonPolice for their bravery in stopping this evil.

U.S. Senator Rob Portman (R-OH) called for an end to "senseless acts of violence" on Sunday.

"I went to bed with a heavy heart because of #ElPaso and woke up to the tragic news from #Dayton," Portman tweeted.

I went to bed with a heavy heart because of #ElPaso and woke up to the tragic news from #Dayton. These senseless acts of violence must stop.

Former Ohio governor and 2016 Republican presidential candidate John Kasich said he was "devastated" to learn of the shooting.

"It's absolutely heartbreaking and I commend the brave first responders who acted so quickly to save lives," Kasich tweeted.

We are all devastated to learn of what happened early this morning in Dayton. It’s absolutely heartbreaking and I commend the brave first responders who acted so quickly to save lives.

Ohio Attorney General Dave Yost called Sunday "a day of sorrow and grief," and offered prayers to the victims and their families.

"I am grateful for the first responders who acted swiftly to de-escalate the situation – they are true heroes," Yost said.

"Today is a reminder that there is evil in the world, but there is good too, and it starts with the Dayton police, who stopped shooter in 1 minute," Cranley wrote.

“It is with my most heartfelt condolences I extend to the families that have lost loved ones in these recent events and my thoughts and prayers to the first responders and dispatchers who handled these tragic situations with the professionalism that may have prevented more loss,” Jones said.

Authorities said the gunman, who wore body armor and carried high-capacity magazines, opened fire at about 1 a.m. in Dayton's Oregon Historic District. The shooter's motive is still unknown, and authorities have not released the identity of the victims.