Bouncer who helped fleeing crowd escape Dayton gunman: 'I would’ve died before that guy came in' 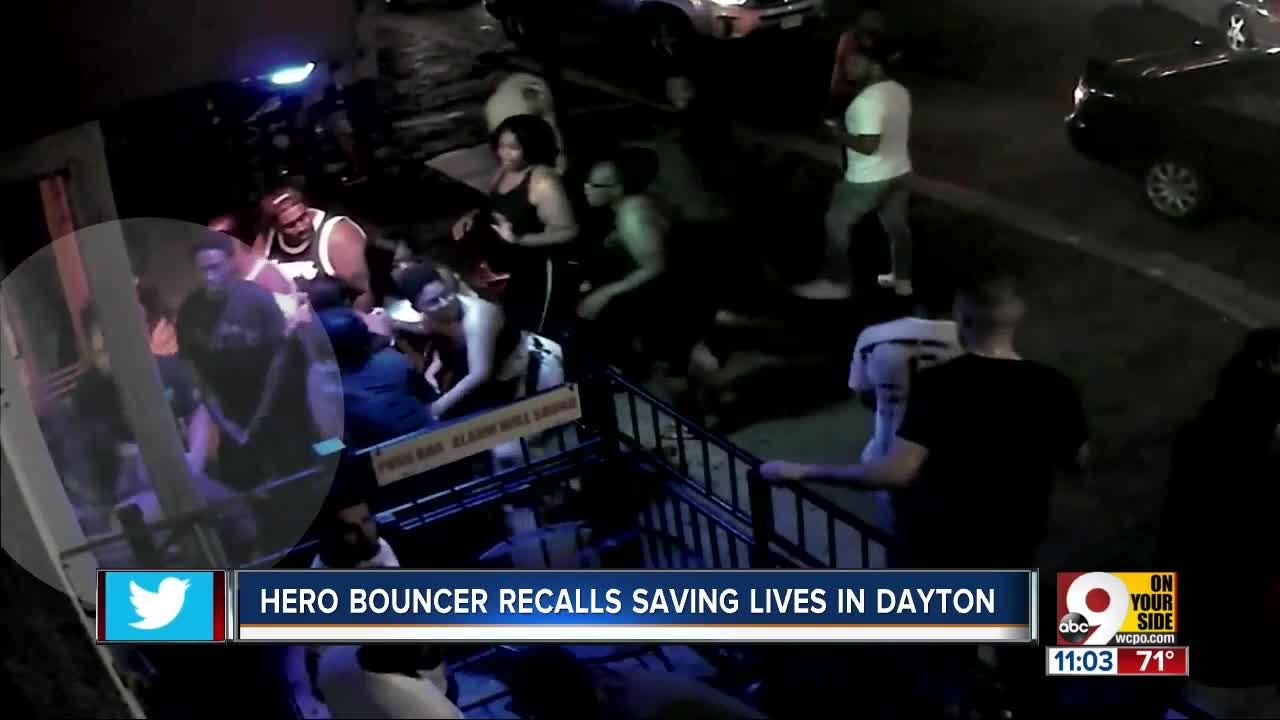 Ned Peppers bouncer Jeremy Ganger wasn’t concerned for his own safety when he heard the pop pop pop of gunshots across the street early Sunday morning. He didn’t consider joining the 200-strong crowd running for the back of the bar.

Ned Peppers bouncer Jeremy Ganger wasn’t concerned for his own safety when he heard the pop pop pop of gunshots across the street early Sunday morning. He didn’t consider joining the 200-strong crowd running for the back of the bar, he told ABC News Wednesday night.

Instead, Ganger began grabbing passersby and helping them through the doors, pushing them down to get them out of the shooter’s line of fire, urging them not to look at what was happening outside.

“My job’s the door,” he said. “I protect the customers and my guys that work there as well, all the staff members, so when I saw the chance to step up and help do my job, my part, that’s all it was. My job.”

Ganger, who once wrestled on the Dayton circuit under the name Pitbull, was recorded on video helping — sometimes by bodily throwing — people out of the way of shooter Connor Betts, whom he described as stalking toward the bar with a clear aura of purpose.

He wasn’t running, Ganger said. He was clearly prepared for the thing he had decided to do — earplugs in, gun loaded, stride brisk but not frantic.

“He knew he wasn’t coming out,” Ganger said. “You could tell he knew what he was doing. I don’t know why, but he was there to hurt us.”

What Ganger did know was that he had decided to hold the door, giving everyone else the best possible chance of escape through the back patio and delaying the shooter until police intervened. At one point, as shots sounded again, he felt something like a nip on his leg and ignored it.

“I would’ve died before that guy came in,” he said, adding: “Our patrons are more important than one active shooter, so I was going to try to stand my ground the best I could.”

He almost did. He estimated he was fewer than three feet from Betts when Dayton police fatally shot him.

“He looked at me straight in the eye,” Ganger said. “That’s why — I don’t know if you saw the footage, you see him pause for a second — it’s because he’s looking at me. Like, ‘Why are you holding the door?’ So he knew I was there waiting. That’s what I wanted him to know. I hope I’m the last thing he remembered.”

Betts killed nine people total, among them his younger sister, Megan Betts. He wounded more than 20.

Ganger didn’t immediately realize he was one of them. The nip he felt during the attack had been a tiny piece of a shell casing ricocheting off his leg.

Doctors told him they could cut the shrapnel out or leave it in. Either would be safe.

He decided to leave it in.

Ganger hasn’t slept well since the attack, he said Wednesday. He can’t shake his thoughts of the nine victims, the discarded shoes and purses left on the floor of Ned Peppers and his wish that he could have protected more people; he’s been told none of it will go away in a hurry. He prays for the victims and urges others to thank the police for intervening.

Sometimes, he said, a person will approach him and thank him for being there on the night of the shooting. He’ll accept the compliment. Pet their dog if they have one.

“A lot of people don’t understand what we’re all going through,” he said. “It’s pretty heavy on all our hearts and going down (back to the Oregon District) to see my coworkers, my friends, fellow patriots, it did really help a lot. Just hearing people telling stories about the ones that got hurt, people coming up to me and telling me thank you, it means a lot. It’s a weight being lifted off our chests because it was hard that night. Real hard.”

He’s decided to go back to work when it’s time.

“If I don’t go back to work, he wins,” he said of Betts. “He took something away from all of us if we don’t go back. He’s not gonna beat me."