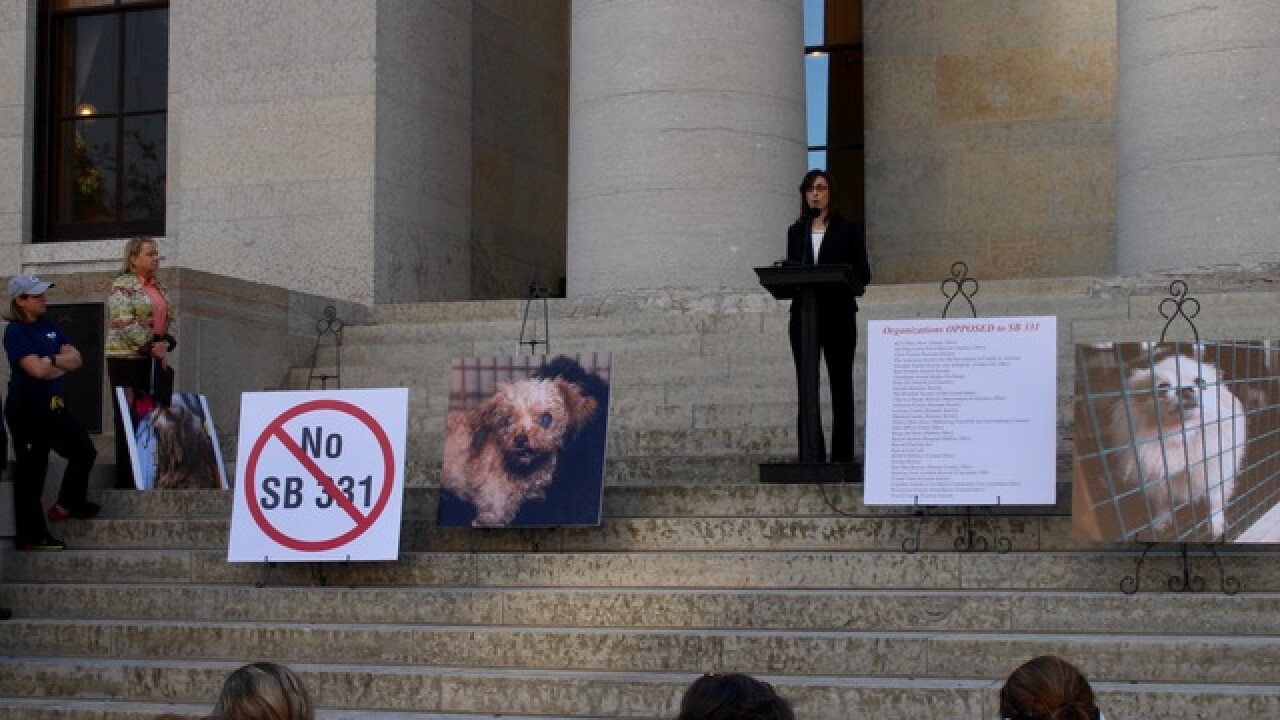 COLUMBUS, Ohio -- Ohio animal rights groups are up in arms about a bill moving through the Ohio House that they say will protect puppy mills and the pet store corporations that are accused of using them.

Dubbed the “Petland Bill” by animal rights groups, it attempts to license pet breeders for the first time and puts fines up to $10,000 on breeders who run “puppy mills,” or large-scale dog breeding operations that are notorious for keeping dogs in inhumane conditions.

Petland is a national pet store chain with 17 stores in Ohio, including in Fairfield. Petland has been accused by animal rights groups of sourcing puppies they sell from puppy mills, thereby supporting puppy mill breeders.

While these potential new regulations from the bill would be a step in the right direction, enforcement of the bill could be questionable, state director for the Humane Society of the United States Corey Roscoe said.

The bill, SB 331, only designates the Director of the Ohio Department of Agriculture to come up with new regulations, and doesn’t specifically say what agency would enforce the bill. It remains to be seen how strict regulations on breeders would be, and who would keep breeders accountable to these new regulations.

And one provision of SB 331 that especially worries animal rights groups would ban local communities from making or keeping ordinances that prohibit puppy mill operations in a community.

“It’s taking away our rights as local cities to say, ‘You can’t sell puppy mill dogs in our local area,’” Mary O’Connell, coordinator of the Ohio Airedale Terrier Rescue in Cincinnati, said.

Toledo and Grove City (in central Ohio) are the only two municipalities in Ohio that have ordinances banning the selling of puppies from puppy mills. Potential regulations from SB 331 would override these local ordinances.

And Petland spokesman Mike Gonidakis claims that these local ordinances are putting Petland out of business by forcing them to work only with animal shelters, which he says are reluctant to work with Petland.

“We’d have 600 employees who would lose their jobs if this bill doesn’t get through,” Gonidakis said. “We try to bring good jobs here into Ohio, and sometimes local communities hurt that opportunity.”

Petland needs to be able to work with all potential breeders to be economically successful and still offer purebreed puppies to consumers, Gonidakis said.

“Michael knows better than that -- that’s a false statement,” Schottke said. “We had hours of testimony to hear all sides of the issue on puppy mills, and we weren’t pressured to make a decision.”

SB 331 has already passed the Senate and is currently being considered in the House Finance committee.

The Humane Society of the United States and other animal rights groups might file a lawsuit against the Ohio state government if the bill becomes law, Roscoe said.