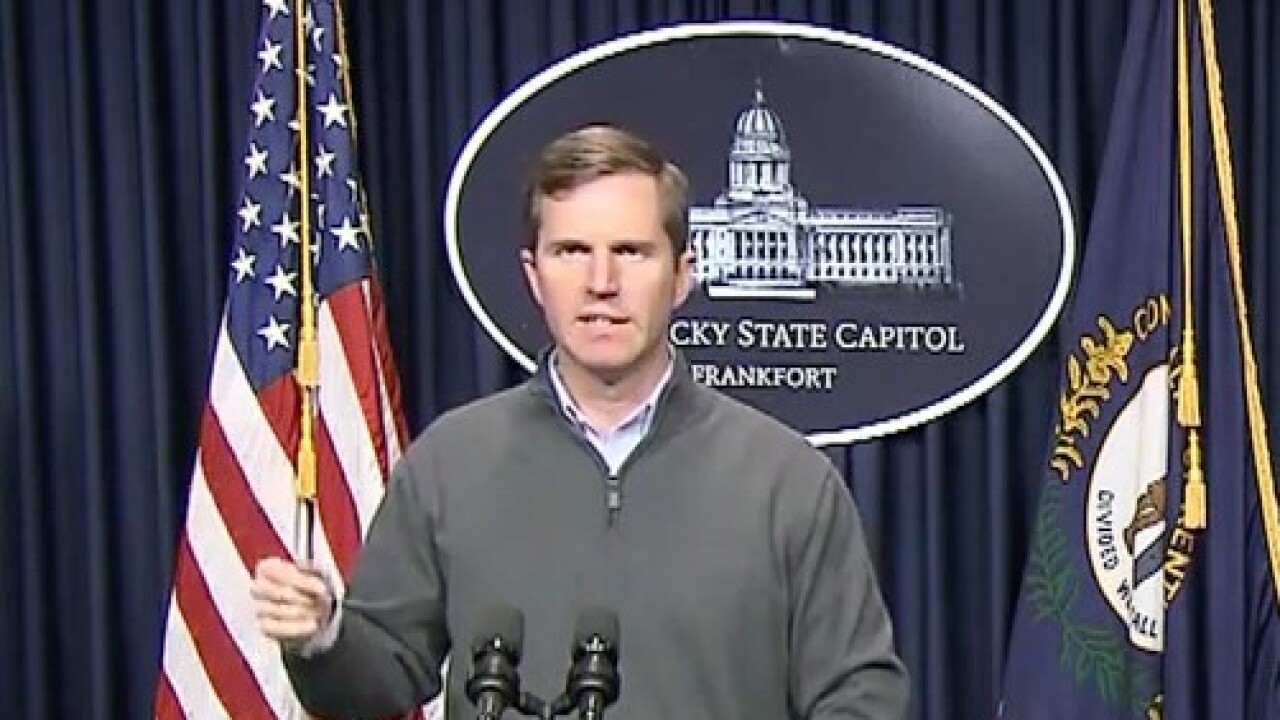 KET
Kentucky Gov. Andy Beshear gives an update on the coronavirus crisis in Kentucky on March 15, 2020.

Beshear said he took the test after attending an event in Louisville and learning that another attendee had since tested positive.

At a news briefing, Beshear did not announce any major new closings or restrictions, but the governor did say he is prepared to take any actions he deems necessary, such as closing bars and restaurants like Ohio did Sunday, if cases increase significantly.

"I'm not going to be the governor that acted two weeks too late," he said.

Citing an example of recklessness, Beshear implored Kentuckians to practice social distancing and limit contact with others.

"This weekend we saw instances of hundreds of people going into one bar or one club," Beshear said. "We're shutting down schools (temporarily). We have to make sure that these efforts work, and if you go out and get in a small place with a hundred-plus people, you frustrate those efforts."

Beshear noted that Ohio Gov. Mike DeWine said his state may close schools for the rest of the school year.

"We're not ready to recommend that, but we do think we need to be prepared for longer closures," Beshear said.

Beshear noted that he canceled the popular Prayer Breakfast on Sunday and asked churches across the state to cancel services this weekend.

"I know that's a big step and I know some won't agree with it, but I believe it's our job to offer those protections," Beshear said.

Calling one Kentuckian's actions "really irresponsible," Beshear criticized a Nelson County resident who refused to self-isolate and had to be forcibly quarantined inside the person's home after testing positive. Beshear said a sheriff's deputy has been stationed outside the home.

"I hope that attitudes can improve and this is the only time we have to do that," Beshear said.

After saying in his briefing that there were two cases, Beshear reported a third and updated the Kentucky total to 21. He said one person is "not expected to recover."

"Coronavirus is not the only factor in that individual's condition, but it is a contributing factor," Beshear said.

So far no COVID-19 deaths have been reported in Kentucky.

Also, there still are no confirmed cases in Northern Kentucky. The three new cases are in Jefferson and Clark counties. Cases now spread across seven counties: six in Harrison, six in Jefferson, five in Fayette and one each in Montgomery, Bourbon, Nelson and Clark.

The Governor's office said two cases reported Saturday were "expected and related to an existing case." The confirmed cases in Kentucky ranged in age from 27 to 80 years old, Beshear said.

Beshear urged Kentuckians to self-isolate, practice good hygiene and protect each other as the virus continues to spread.

He said Kentucky's COVID-19 hotline - 1-800-722-5725 - continued to field thousands of daily calls from people concerned about their own health.

The next briefing will be at 9 a.m. Monday, Beshear said.