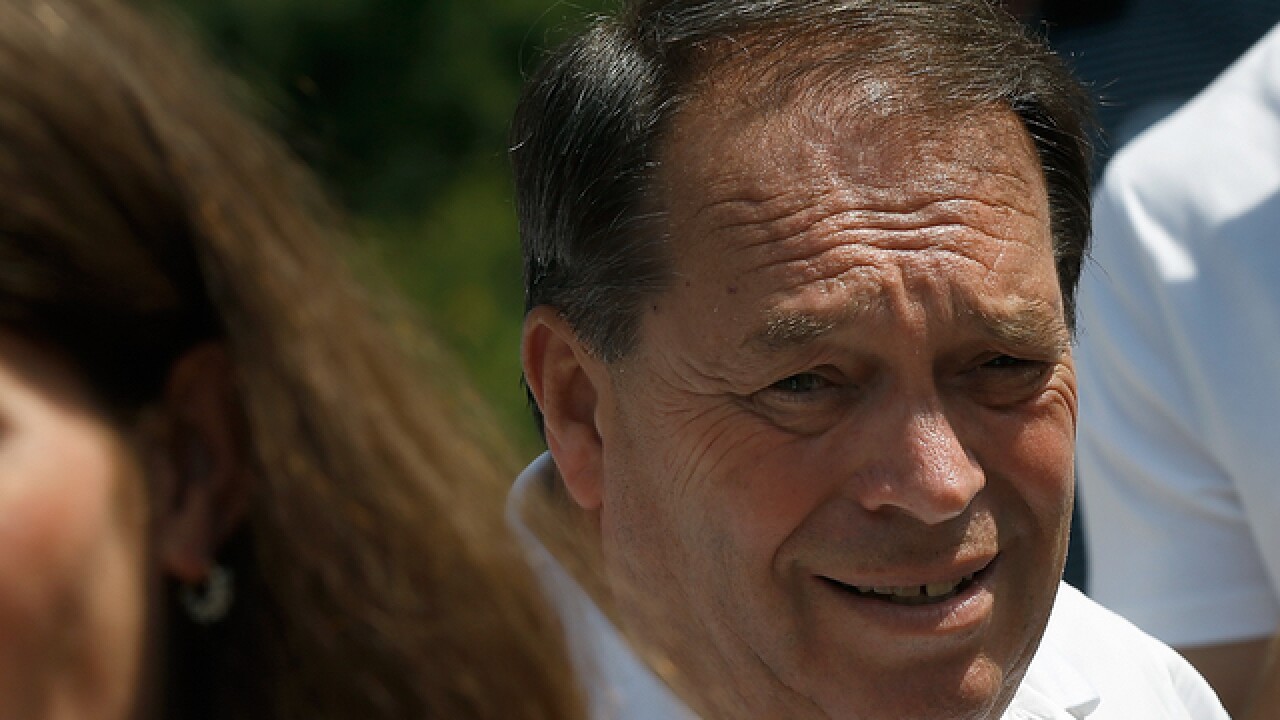 FRANKFORT, Ky. (AP) — A federal grand jury on Friday indicted the father of former Democratic U.S. Senate candidate Alison Lundergan Grimes on charges that he used his company to fund her 2014 campaign and then lied about it.

Lundergan is a former state lawmaker and chairman of the Kentucky Democratic Party. He has close ties to Bill and Hillary Clinton, both of whom came to campaign for Grimes during her failed 2014 bid to unseat Sen. Mitch McConnell.

Lundergan's attorney denied the allegations, saying they were "wrong on the facts and wrong on the law." He noted Grimes' campaign and other committees together raised more than $25 million for her 2014 campaign.

"The campaign didn't need or seek any extra help from Jerry Lundergan or his family-run business," attorney J. Guthrie True said. "The government's allegations are misguided, and the evidence will confirm that Jerry Lundergan is innocent of all charges."

Grimes is finishing up her second term as Kentucky's secretary of state and is considering a run for governor in 2019. In a news release, Grimes said the charges were the result of "a politically motivated complaint filed against my campaign nearly five years ago."

"I love my father, and I have faith in the judgment and fairness of the people of Kentucky, and believe when all of the facts are in, my father will be vindicated," Grimes said.

Grimes' run against McConnell in 2014 was one of the country's most expensive Senate campaigns that year. Her campaign raised nearly $19 million, according to the Federal Election Commission. But McConnell raised more than $30 million in a campaign that led to him being elected majority leader of the U.S. Senate. Those totals don't include what was spent by outside groups.

According to the indictment, Lundergan hired campaign consultants and vendors for Grimes' campaign and told them to bill his company, S.R. Holding Co., Inc. The indictment says Lundergan did not ask the campaign for reimbursement, but he did ask for partial reimbursement after federal authorities issued subpoenas and a search warrant in 2016.

The indictment shows Lundergan's company paid at least $218,000 for services that benefited Grimes' campaign. At least $138,000 of that went to Emmons. For example, in September 2013 Emmons organized recorded phone calls for the Grimes campaign. But instead of sending the campaign a bill, he sent it to Lundy's Special Events, one of the companies Lundergan owned, according to the indictment.

"Every effort was made to properly account for and accurately invoice services provided to the campaign by Mr. Lundergan's companies and their vendors," True said. "Likewise, payments made to Dale Emmons — a long-time friend and business associate of Mr. Lundergan's — were not made on behalf of the campaign and the evidence at trial will show as much."

Emmons did not respond to a phone message seeking comment.

The indictment is similar to a complaint the Republican Party of Kentucky filed against Grimes' campaign in 2014. At the time, they accused Grimes of accepting illegal campaign contributions from Lundergan in the form of an RV that he rented to the campaign at below the market rate. Grimes said the Federal Election Commission ultimately dismissed that complaint.

The indictment indicates Grimes and her campaign did not know about Lundergan and Emmons' alleged conspiracy. The charges state the men "concealed" the conspiracy from Grimes' campaign, causing it "unwittingly to file reports with the FEC that were materially false."

The charges, when combined, carry a maximum sentence of 110 years in prison and a fine of $2.5 million.

The indictment comes as Grimes is preparing to oversee the 2018 midterm elections as Kentucky's chief election official. Friday, Republican Party of Kentucky spokesman Tres Watson called for Grimes to recuse herself from that role.

"It is clear Secretary Grimes has absolutely no regard for the laws governing our elections that she was elected to uphold," Watson said.