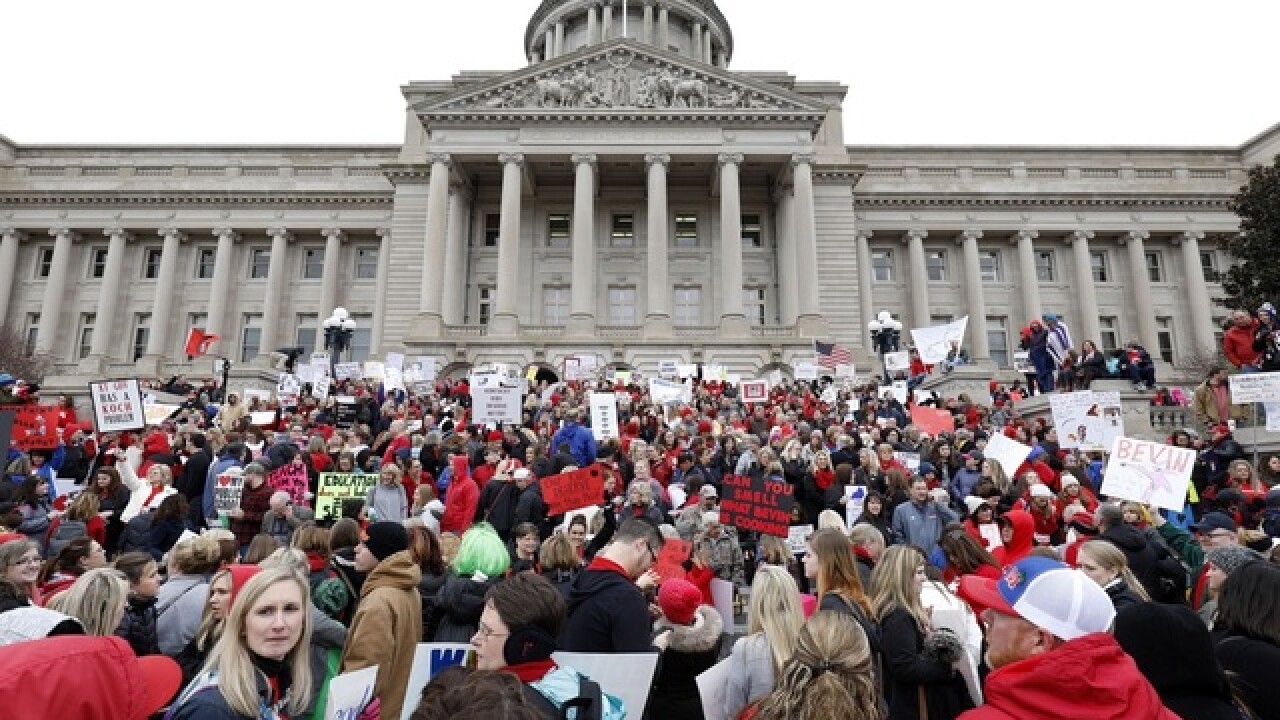 Image copyright 2018 Getty Images. All rights reserved. This material may not be published, broadcast, rewritten, or redistributed.
Bill Pugliano/Getty Images
<p>FRANKFORT, KY - APRIL 2: Thousands of public school teachers and their supporters protest against a pension reform bill at the Kentucky State Capitol April 2, 2018 in Frankfort, Kentucky. The teachers are calling for higher wages and are demanding that Kentucky Gov. Matt Bevin veto a bill that overhauls their pension plan.</p>

LOUISVILLE, Ky. -- A Kentucky judge on Wednesday struck down a new public pension overhaul law that angered thousands of teachers who marched on the state Capitol and closed dozens of school districts in protest.

The case turned into the latest round of a bitter feud between Republican Gov. Matt Bevin and Democratic Attorney General Andy Beshear.

Beshear, who sued to block the measure, called the ruling a "win for open, honest government" and said it voids the law in its entirety.

"The public simply cannot be shut out of the legislative process," he said.

Bevin, who signed the bill earlier this year, did not immediately comment on the ruling.

Lawmakers passed the bill in March to make changes to Kentucky's public pension systems, some of the worst-funded retirement plans in the country. It also changed how current teachers can use their sick days to calculate their retirement benefits. The vote came late in the legislative session on a bill that would mostly impact future hires.

Lawmakers used a legislative maneuver to introduce the bill and pass it on the same day without making it available to the public.

In making their case, the law's detractors had pointed to constitutional provisions requiring a bill to be read on three different days.

Bevin's attorneys argued that the "three-readings requirement" was a political question that should be left to the legislative branch.

The judge disagreed. Shepherd said the requirement was enacted by the constitution's framers "to ensure that legislators and the public know the substance and the content of the bills they vote on. It is a constitutional mandate — not an internal procedural rule of the General Assembly."