Kentucky 2030? Could Korea export its rural Olympic gamble to the coalfields of Appalachia? 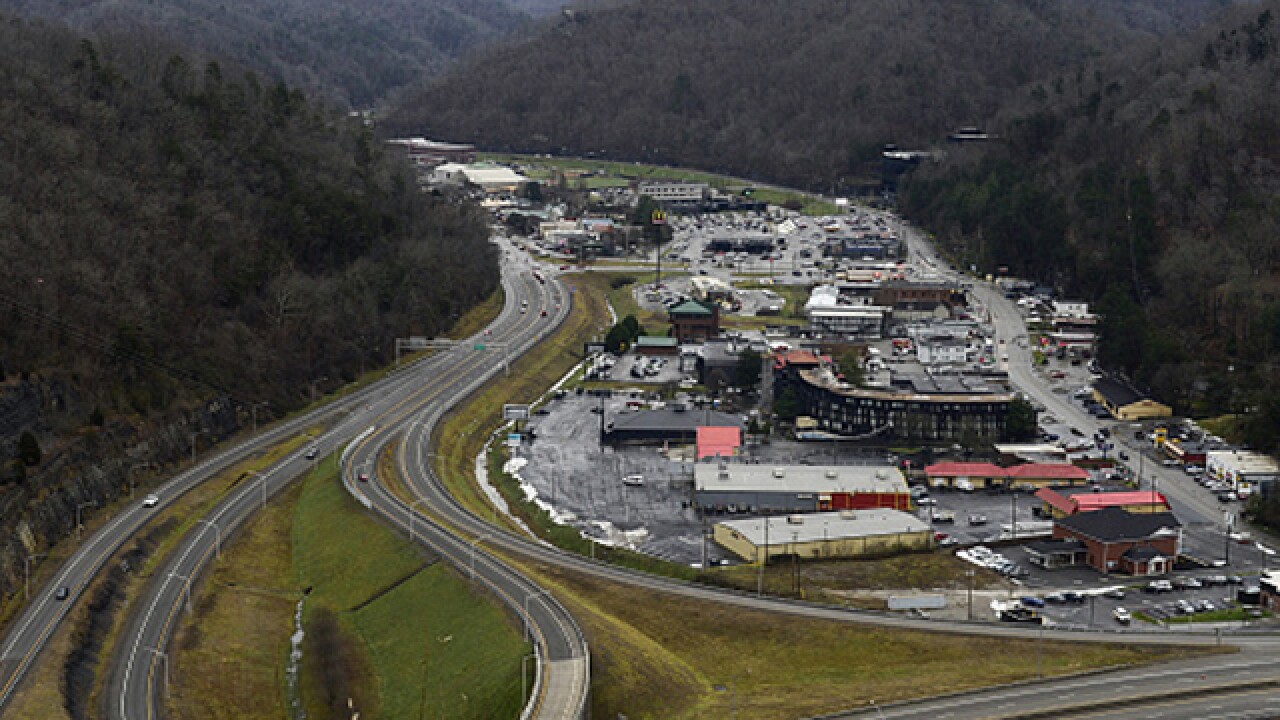 Image copyright 2018 Getty Images. All rights reserved. This material may not be published, broadcast, rewritten, or redistributed.
Getty Images
<p>Buildings stand in the main commercial strip as seen from the scenic overlook at Bob Amos Park in Pikeville, Kentucky, U.S., on Monday, Feb. 1, 2016.</p>

A coal mine stands on the mountain exactly as it was the day it was abandoned, now a rusting relic of blue-collar glory lost to a globalized world.

It towers over this Korean coal community that is much like its American counterparts: poor, aging, hollowing out since the mines shut down and the young and able fled for cities. But with one notable exception.

A statue of a cartoon white tiger was recently erected at the foot of the mountain: Soohorang, the smiling mascot of the 2018 Winter Olympics, its foot raised to march, its back to the molding mine on the mountain. Unlike American coal counties, this Korean coal county is hosting the Olympics.

The Pyeongchang Winter Games are spread across South Korea's Gangwon Province, a rural region that few overseas had heard of until its hard-fought bid to be an Olympic host — a massively expensive proposition with dubious payoff, now typically dared only by world-class cities and established resort towns. Its organizers touted it as an opportunity to invest in much-needed infrastructure and transportation upgrades — and with it, restore a sense of pride and purpose.

But will it work? And would it work in its American equivalent, the coalfields of Appalachia?

Kentucky native Maddy Boyd drove to the new Jeongseon Alpine Center to join spectators from around the globe to watch superstar athletes race for gold. She took in the mountains and the winding roads and the traffic that backed up behind tractors.

"It feels like home," she said, rooting for the notion that her home state, an American underdog, might one day chase Olympic glory.

If South Korea could do it, she reasons, why couldn't Kentucky?

"It may be far-fetched to imagine an event like the Olympics coming to these hills," says Dee Davis, founder of the Center for Rural Strategies based in Whitesburg, Kentucky, the heart of American coal country. "I can guarantee you that this time yesterday I wasn't thinking about an Olympic Village in Whitesburg."

But then he considered the similar statistics of Gangwon, where the Olympic Village that currently houses the most elite athletes in the world now stands.

It is rugged, isolated, one of the country's oldest and poorest regions, just like the Appalachian states of Kentucky and West Virginia, but with the added complication of "sitting right there in the world's military powder keg," about 50 miles from the fortified border with North Korea.

"We'll see how it turns out," Davis says. "But you've got to say that they have heart. They put down a marker, they said, 'We are here.' That's as courageous and provocative as trying to have an Olympics in West Virginia."

Not far away, in the Korean mountain town of Sabuk, there are few hints of the spectacle that has been unfolding down the road.

"It's very exciting to be close to the Olympics," said Yeo Bong-kyu, a volunteer at a mining museum that documents the county's faded industry. "But it's just an event, just to enjoy, and it ends."

And when it does, many here say they expect the same problems they had before the Games began.

Lim Su-ja chopped frozen pollock at a market that once bustled when the mine was open but now sits mostly quiet most of the time, including on this seventh day of the Olympics.

"There's too few people here," says the 72-year-old miner's widow. Many of her neighbors have moved away and tourists don't come. "We now only have old people who don't have anywhere to go."

Her worry is repeated again and again by residents here, in a town that now shares a county with a marquee venue at the most prestigious sporting event in the world: Despite the exciting new Olympic ski resort down the road, their community will continue its march toward oblivion.

"Maybe this town won't entirely disappear, but I don't know who would be staying," says Lee Sang-kyu, 52, who left Sabuk 30 years ago for a factory job near Seoul. He was visiting his mother in a stretch of crammed concrete houses that used to be packed with mining families.

Now it is almost deserted, the windows boarded up. His mother is 80 years old, and once she's gone, he can't imagine any reason to return.

On the other side of the globe, in the United States, a similar breakdown in blue-collar communities has consumed the political debate. President Donald Trump rode into the White House, in part, on promises to revive America's versions of Jeongseon County — as he put it, "the rusted-out factories scattered like tombstones across the landscape of our nation."

It seems inconceivable that among the solutions, rural America might consider an Olympic wager. Tulsa, Oklahoma, bid on the 2024 Games and was greeted with adjectives like "adorable." Also: "delusional."

The United States government does not finance Olympic bids, which often cost upward of $50 million just to prepare, then billions more if the city wins. They require multiple stadiums and tens of thousands of hotel rooms.

The only American places with a chance are those that already have the infrastructure or that can afford to sink billions into the Games despite long-shot odds of a lasting return on the investment. America's current Winter Games contenders are Denver, Reno and Salt Lake City.

But Korea was willing to spend some $13 billion on roads, rail lines and resorts to remake this province into a winter sports destination. Once the Olympic masses leave, it remains uncertain what will become of some of the new arenas. In former Olympic cities, venues stand as "white elephants" — empty, mostly useless and costing millions each year to maintain.

"We always say that Gangwon Province will be crushed under a pile of debt after the Olympics," says Kim Jin-tae, a 72-year-old former miner. "This will be a deficit for Gangwon."

His town has been thrown an unreliable life preserver before. They protested in the 1990s against government plans to abandon mining, and in return were granted permission to host the only casino where locals in conservative South Korea are permitted to gamble. Residents had hoped the massive casino perched on the hill above their shuttered mine would inject the area with new wealth.

Eighteen years later, Sabuk's plummeting population makes it feel like a ghost town with electricity, lighting up a chaotic mixture of motels, massage parlors and dozens of neon-lit pawn shops where gamblers deposit anything from wristwatches and cellphones to cars.

This community is once again dependent on a single industry that delivered a new round of heartaches: gambling addiction, upended families, desperate strangers who came to the casino from out of town, lost everything they had and were unable to return home.

Yet if the casino closed, many say, their town would disappear.

Some with roots here hope that the Olympics can restore something else, something much more difficult to quantify and cultivate: pride.

A mural hangs above the door of the abandoned mine. It depicts a miner, smiling, with a banner below that offers the following quotation: "I was a miner, an industrial warrior." It was a term widely used in South Korea to glorify workers who drove the country's growth from the 1960s to the 1980s under a series of military dictatorships.

It was honorable work, now gone, much like the shuttered coal mines in Kentucky and West Virginia that left many feeling abandoned and maligned by their fellow citizens.

As Song Chang-woo joined the hordes at gates of the Olympic alpine ski resort, he considered the fact that it stood in his deteriorating hometown. He was in awe.

"I feel very proud," the 53-year-old photographer said. He left decades ago for Seoul. But he thinks this county is the one of the most beautiful places on Earth, and he's glad tourists from around the globe now get to see it. Maybe then they will love it as he does.

"For us in hardscrabble rural communities, I think there are lessons that we can learn from Pyeongchang now," says Davis, of Kentucky's Center for Rural Strategies.

"It's a gamble, but they've asked the world to come see for themselves, not just to enjoy the competition, but to have a beer, listen to stories, to observe the whole dance, show up and experience local life," he says. "Then they'll make up their own mind, and that will replace the stereotype. That's the lesson we can learn in places like Appalachia. The faint of heart will not win the day."

So Kentucky 2030, then? Probably not the most practical idea, he says, with all those hotel rooms and arenas they'd somehow have to build.

"But," Davis says, "I don't doubt that we could host something really special."