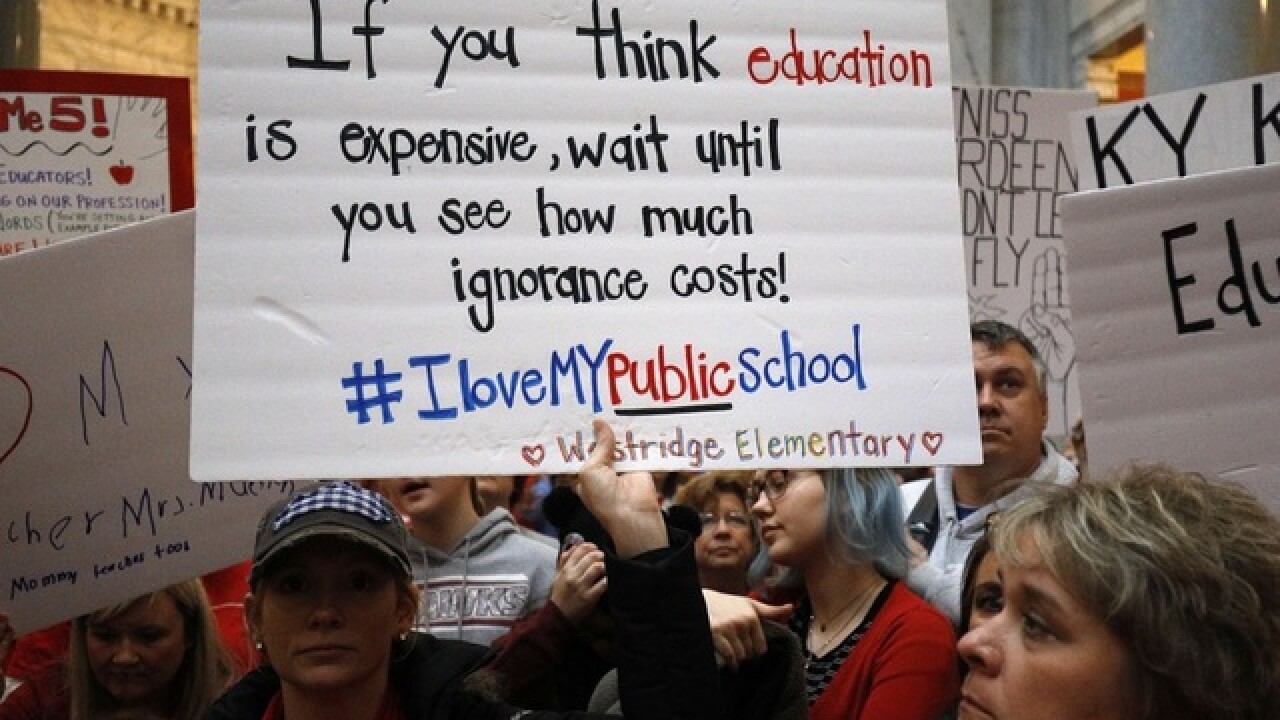 Image copyright 2018 Getty Images. All rights reserved. This material may not be published, broadcast, rewritten, or redistributed.
Bill Pugliano/Getty Images
<p>FRANKFORT, KY - APRIL 2: Public school teachers and their supporters protest against a pension reform bill outside the senate chambers at the Kentucky State Capitol April 2, 2018 in Frankfort, Kentucky. The teachers are calling for higher wages and are demanding that Kentucky Gov. Matt Bevin veto a bill that overhauls their pension plan.</p>

Several Northern Kentucky school districts are closed Friday so teachers and other personnel can rally in Frankfort.

Watch as teachers depart for Frankfort in the player below:

Teachers from across the state who rallied in Frankfort last week said they plan to rally there again as lawmakers consider overriding Gov. Matt Bevin's veto of tax and budget measures that would've restored many of the funding cuts Bevin recommended.

Melanie Gleason, a teacher at Tichenor Middle School, was among those who left for the Capitol Friday morning. Gleason said she’s going to rally because she’s hoping for an override of the governor’s veto of the budget.

“If you look back to the governor’s original budget, our district would stand to lose $3 million and overall, Northern Kentucky districts would lose about $30 million,” Gleason said.

Gallatin County Schools and Erlanger-Elsmere Schools announced Wednesday they would not be open Friday.

Gallatin school officials wrote in a Facebook post that the "majority of our staff, along with statewide employees, believe that funding cuts and other decisions may negatively impact our district, school and teachers."

Dayton Independent Schools and Owen County Schools also announced late Thursday night they would close Friday, although neither district specified the walkouts as the reason.

Other local school officials have also said they would lose significant funding under the plan. Beechwood Superintendent Mike Stacy said that district will lose between $500,000 and $800,000 next year if lawmakers override the veto. Boone County Superintendent Randy Poe said cuts would force the district to lay off 110 staffers.