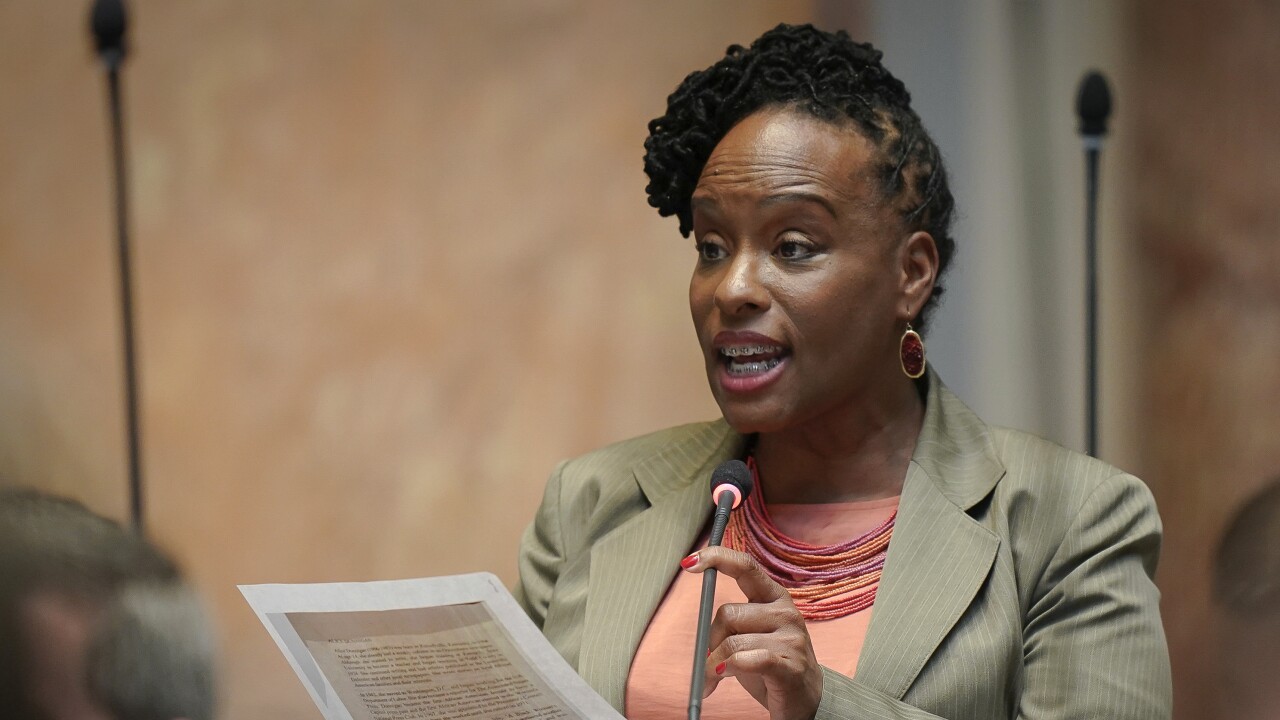 (Copyright 2020 The Associated Press. All rights reserved. This material may not be published, broadcast, rewritten or redistributed.)
Bryan Woolston/AP
FILE - In this March 2, 2020, file photo, state Rep. Attica Scott, D-Louisville, speaks on the floor of the House of Representatives at the Capitol in Frankfort, Ky. Felony rioting charges were dropped Tuesday, Oct. 6, 2020, against the Kentucky lawmaker and others arrested last month during protests demanding justice for Breonna Taylor. (AP Photo/Bryan Woolston, File)

Afterward, Scott told supporters gathered outside that the arrests would not deter them from speaking out for Taylor, saying: “We will turn our protests into policy.” She has unveiled legislation to ban no-knock search warrants in Kentucky and impose new requirements on police practices.

Police had said Scott was in a group last month that was ordered to disperse but failed to do so. Members of the group damaged multiple buildings, including setting fire to a library, police said.

The Democratic lawmaker has called the charges “ludicrous,” telling reporters the day after her arrest that there was “no way” she would have tried to damage the library.

During Tuesday’s hearing, O’Connell said there was evidence of property damage to buses and the library on the night of Sept. 24 when Scott and the others were arrested. But he added: “We would need clear-cut evidence that these individuals before you today were working with those who committed that property damage. The evidence we have reviewed thus far does not support that.”

Proceeding with the rioting charges would not be a “just outcome for these defendants,” he said.

Misdemeanor charges of unlawful assembly and failure to disperse are still pending against Scott and other defendants. Prosecutors need more time to review those charges, O’Connell said.

Scott said Tuesday that she and others will be back in court next month to “fight these bogus misdemeanor charges.”

Scott was among hundreds of people protesting in downtown Louisville after grand jury hearings into Taylor’s death led to no charges against police officers for shooting into the Black woman’s apartment and killing her during a March drug raid. A single officer was charged for firing into a neighboring apartment. No drugs were found in Taylor’s residence.

Scott was arrested as she headed to a church that offered sanctuary to protesters.

Scott, who is Black, has said her arrest makes her more determined to push for her criminal-justice legislation. The measure, if enacted, would be called “Breonna’s Law.” She plans to offer the bill when Kentucky’s Republican-controlled legislature reconvenes early next year.

Another Democratic lawmaker, state Rep. Lisa Willner, has said she’s working on legislation that would narrow the scope of Kentucky’s rioting statute in response to her colleague’s arrest. The proposal would protect people from being charged with first-degree rioting if they’re present but don’t engage in destructive or violent actions.