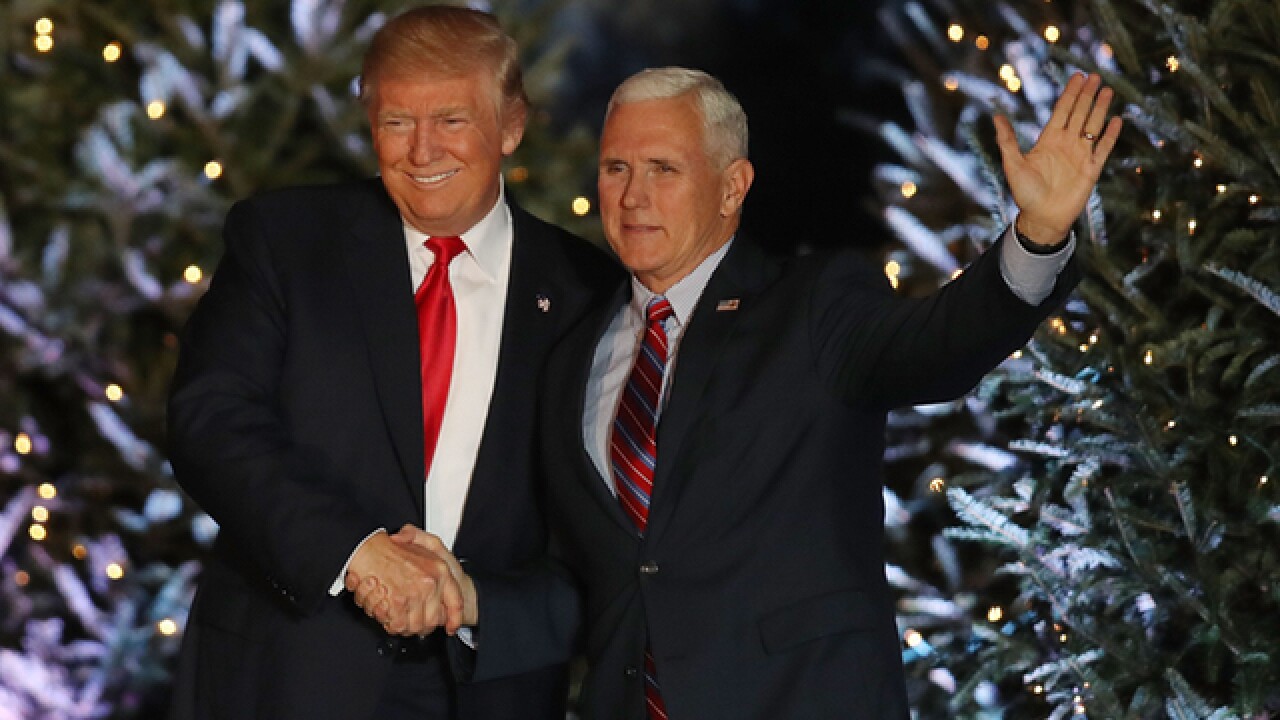 Joe Raedle
<p>ORLANDO, FL - DECEMBER 16: President-elect Donald Trump and Vice President-electÊMike Pence appear together during a stop on his "USA Thank You Tour 2016." at the Orlando Amphitheater at the Central Florida Fairgrounds on December 16, 2016 in Orlando, Florida. President-elect Trump has been visiting several states that he won, to thank people for their support during the U.S. election. (Photo by Joe Raedle/Getty Images)</p>

INDIANAPOLIS (AP) -- On his way out of office, Indiana Gov. Mike Pence approved pay raises for state employees while giving one of the state's highest awards to more than a dozen of his political allies and staff.

Pence, now the vice president-elect, said Indiana "would not be a state that works" without dedicated government workers, to whom he is giving raises that range between 2 and 4 percent. The raises will cost $31 million over the next year, though they amount to a smaller pay bump than what Pence gave out in 2015, The Indianapolis Star reported.

Meanwhile, Pence has awarded a bevy of Sagamore of the Wabash awards in recent days to Republican legislators, state office holders and staffers, as well as Indiana's outgoing Republican Party Chairman Jeff Cardwell, who is a former Pence staffer. The award was at one time the highest public service honor in Indiana.

State offices were closed for the Christmas holiday on Friday and Pence spokesman Matt Lloyd said a list of everyone Pence gave the award to in recent weeks was not readily available.

In one recent photo obtained by The Associated Press, Pence is posing in the governor's office with eight members of his staff who are clutching their awards. The staffers include longtime aides Lani Czarniecki and Chris Crabtree, as well as his personal assistant and "body man" Zach Bauer.

Pence's mass issuance of the awards was mocked by some Indiana Republicans on social media as excessive, but former Pence spokesman Robert Vane said it was appropriate to give the award to his staff.

"It is completely within Gov. Pence's character to recognize the staffers who put in 70 hours a week in their service to Hoosiers and his office," said Vane. "The easiest thing in the world is to give Sagamores to businessmen and large donors, but it's typical of the vice president-elect to award them to the people who work hard for him every day."

Indiana governors are free to develop their own criteria for handing out the award, which was created during the term of Gov. Ralph Gates in the 1940s.

While some have generously handed them out, Pence's predecessor, Republican Gov. Mitch Daniels, sharply curtailed the number issued during his eight-year tenure. Pence issued looser rules for giving the award when he took office in 2013, allowing each of the state's 150 lawmakers to nominate two people for the Sagamore award every year.

The award used to be the highest public service honor in the state until Daniels revived Indiana's Sachem award, which is issued to one person a year.

Republican Secretary of State Connie Lawson was one of the office holders given the Sagamore award this week. During the election won by President-elect Donald Trump and Pence, Lawson was a driving force behind an investigation into voter registration irregularities and repeatedly raised fears that widespread voter fraud could be occurring. After Trump and Pence were elected, Lawson said the election process "worked."

Pence, who leaves office on Jan. 9, said the pay raises were a just reward for hardworking state employees.

"Indiana would not be a state that works without the dedication and commitment of our state employees," Pence said in a statement. "I am privileged to work alongside the Hoosiers who are the force behind the outstanding services and support the people have come to expect from their state government."