At least 19 students hurt in Dearborn County bus crash, according to state police 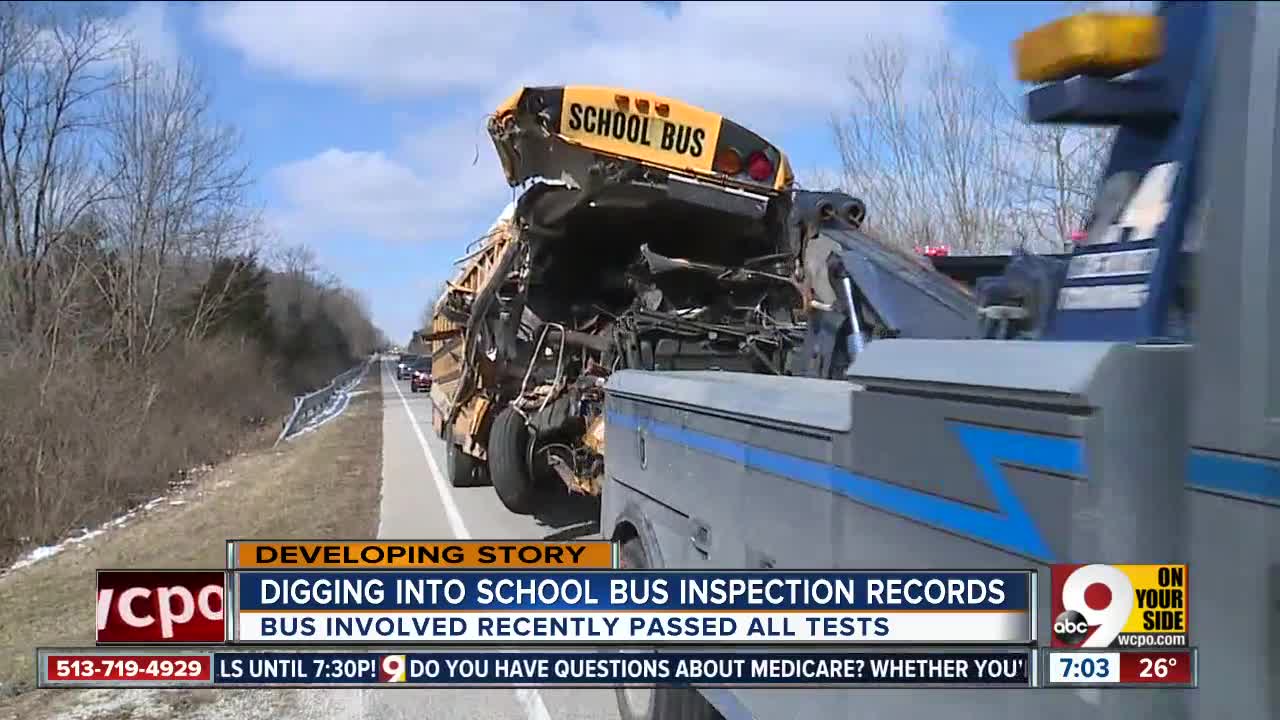 At least 19 students and two drivers were injured Wednesday in a crash involving a school bus and a garbage truck. The South Dearborn Community School Corporation bus was headed eastbound on State Route 350 just before 8 a.m. when it collided with a stationary Rumpke garbage truck parked on the side of the road near Mount Sinai Road, Indiana State Police Sgt. Stephen Wheeles said. 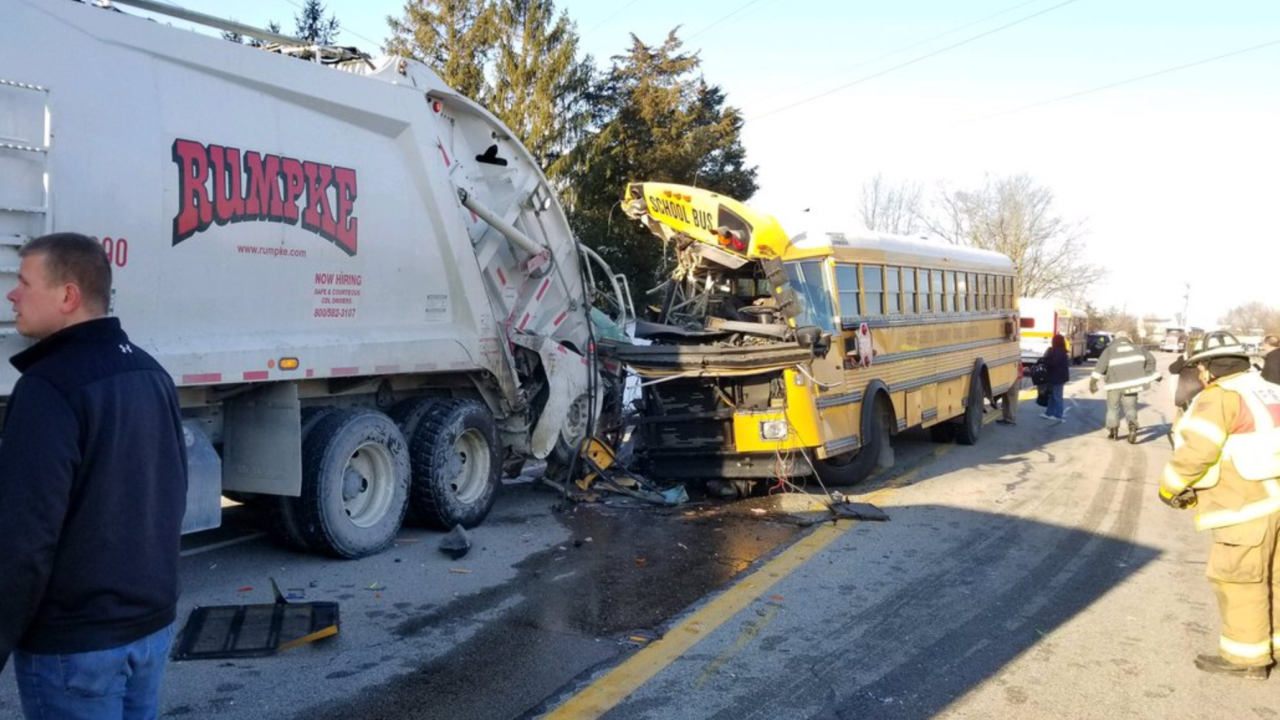 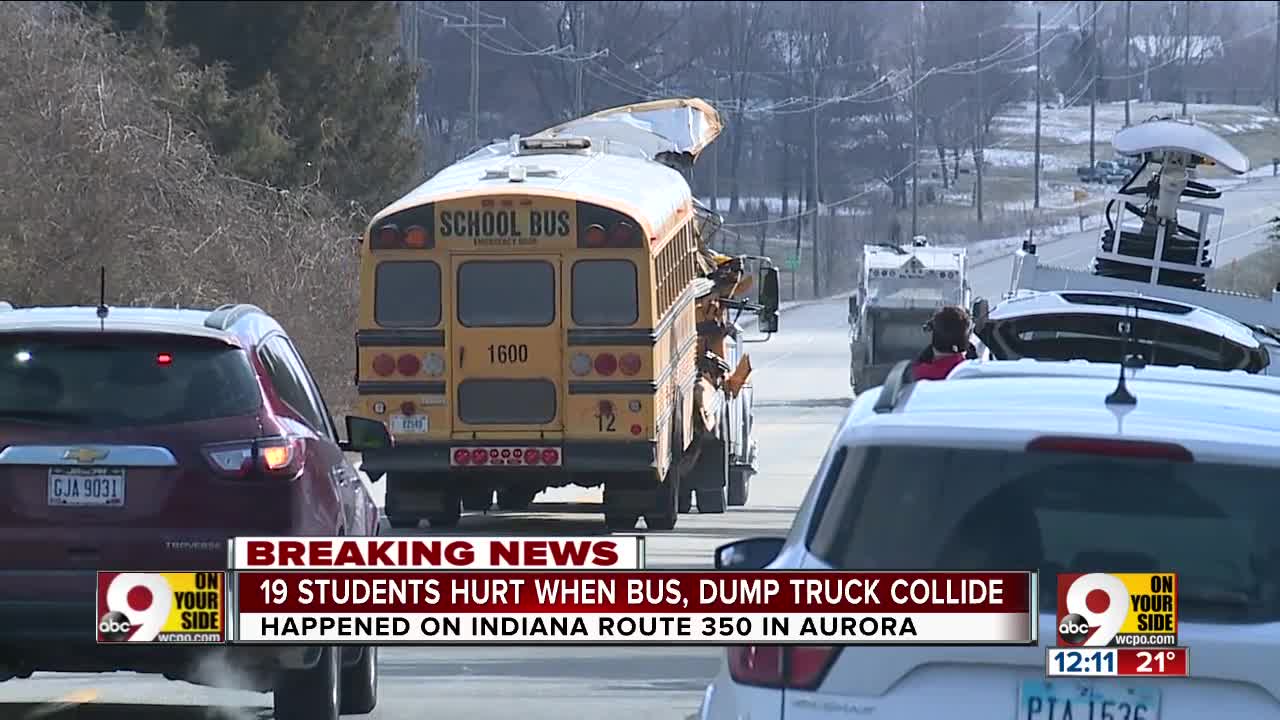 AURORA, Ind. — At least 19 students and two drivers were injured Wednesday in a crash involving a school bus and a garbage truck.

The South Dearborn Community School Corporation bus was headed eastbound on State Route 350 just before 8 a.m. when it collided with a stationary Rumpke garbage truck parked on the side of the road near Mount Sinai Road, Indiana State Police Sgt. Stephen Wheeles said.

Seventh-grader Dakota Jones was sitting near the front of the bus when it crashed.

"All I saw was dust. I heard noises, I heard people screaming and I went to the back of the bus, just trying to get away from this," he said. "And then, people were just — total panic. I was in shock."

The bus driver suffered serious injuries, Wheeles said. The Rumpke driver, who was not in the truck at the time of the crash, was also taken to a hospital because he was injured by debris, according to Rumpke spokeswoman Molly Yeager. Wheeles said the Rumpke driver had minor injuries.

Most of the injured were treated at Highpoint Health in Lawrenceburg. (Officials there said they received 20 students and two drivers, contradicting the number provided by state police.) Two people were transferred to Cincinnati hospitals, including the 13-year-old brought to Cincinnati Children's Hospital Medical Center and the 64-year-old bus driver, who driven to University of Cincinnati Medical Center.

Of the students injured, most were seventh- through ninth-graders. One sixth-grader and one high school junior were also injured.

Dr. Richard Cardosi, medical director of Highpoint Health, said the hospital normally relies on UC Medical Center and Children's Hospital for severe trauma cases. However, a medical helicopter that was called was unable to fly due to weather.

"You train for these kind of situations and you hope they never really occur, and here it was unfolding before our eyes," he said.

Cardosi said he anticipated all patients remaining at Highpoint Wednesday afternoon would be able to go home, and wouldn't need to be transferred to another hospital.

Wheeles and Lows gave updates on the crash at a noon press conference. Watch the full conference below:

The bus, a 2003 Thomas Built, has been in operation in the school district since November 2013, according to an Indiana State Police report. The bus has had all of its inspections (Indiana state law requires all buses older than 12 years old to be inspected twice a year), and the bus has had no major issues over the past five and a half years, reports say.

Wheeles said Indiana State Police are leading the investigation into the crash. It will take some time for crash reconstructionists to determine why the bus driver didn't see the truck, he said. Alcohol and drugs are not suspected factors.

Lows said the bus driver is a veteran employee who is "shouldering a lot of this burden on himself."

Christa Armbruster had two nephews on the bus. She said she knows the man behind the wheel is "an excellent driver" who's been driving the school bus since she was in kindergarten