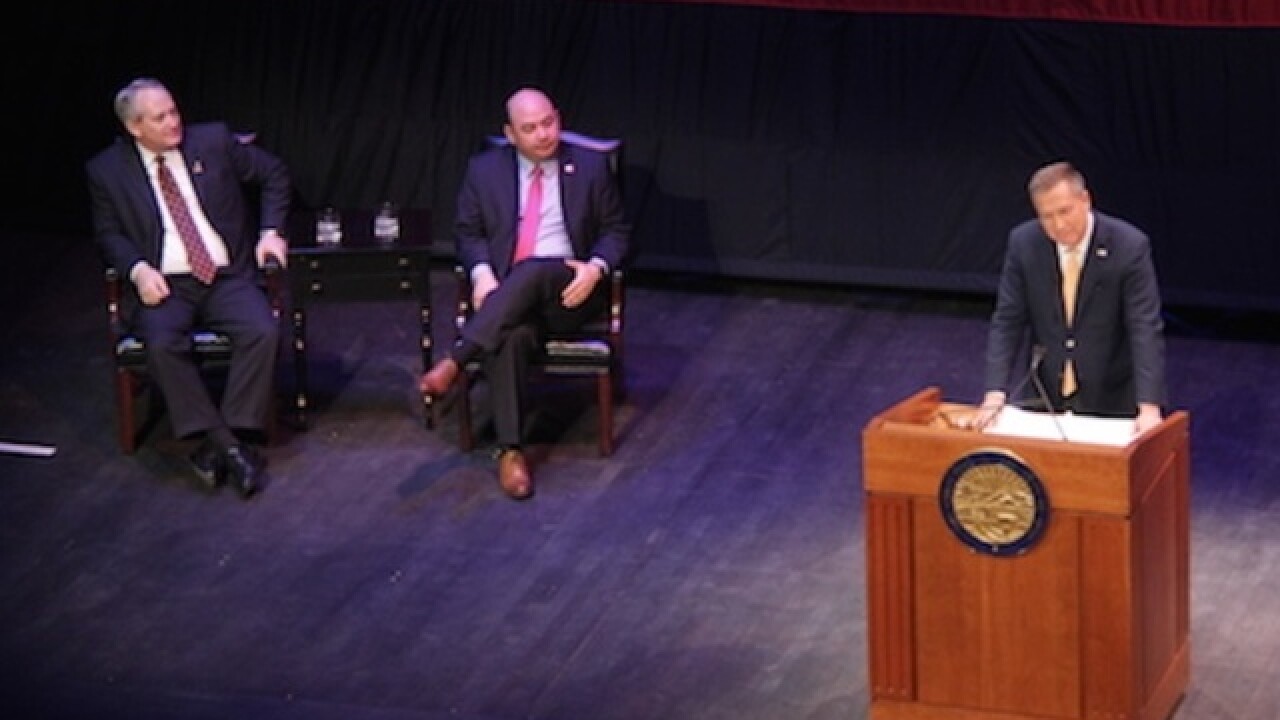 COLUMBUS, Ohio -- Gov. John Kasich said Wednesday he would make sure Ohioans have more money in their pockets instead of waiting for their income tax refunds.

Speaking to hundreds of people in the Peoples Bank Theater in Marietta, Kasich said he is working with lawmakers to speed up the impact of "already-enacted income tax cuts" and to propose "another comprehensive tax reform package early next year with more tax relief and reforms to better align our tax code with the way Ohio works in today's economy."

The tax cuts issue was one of many topics Kasich addressed during his sixth State of the State speech, which took place a day after the Wisconsin Republican primary.

The governor spent a portion of his speech recounting past achievements and the state’s economic recovery.

Since 2011, Ohio has reduced $5 billion in taxes by eliminating the estate tax and reducing state income tax rates by 16 percent. The governor claims the cuts, along with other tax reforms and economic development initiatives, have helped create more than 400,000 new jobs in the private sector, improve the state's credit and build a $2 billion budget surplus.

“The formula is working,” Kasich said.

However, some lawmakers disagree with the governor’s analysis, claiming the cuts are putting a number of local governments at a disadvantage.

During a press conference Tuesday, Kevin Boyce, D-Columbus, said more than $1.7 billion has been cut from local communities, and 31 communities are in fiscal distress.

“It gets a little frustrating to hear about priorities that he then doesn’t fund in the following budget,” Driehaus said. “It’s serious stuff. It’s police and fire trucks; it’s all the things our community counts on.”

Kasich, who is competing for the Republican presidential nomination, also talked about improving the state’s education system by providing children of veterans and military families the option of attending private schools.

He added that schools should put an emphasis on programs related to arts in addition to STEM programs.

“These are all essential for success in these 21st century careers,” Kasich said.

Last year, Ohioans voted in favor of Issue 1, an amendment to reform the state’s redistricting process to curtail political gerrymandering. During the annual address, the Ohio governor urged lawmakers to take a step further and propose reforms on the way the state draws its congressional districts.

“Gerrymandering needs to be in the dustbin of history,” Kasich said.

House Minority Leader Fred Strahorn, D-Dayton, said Kasich made a bold statement on redistricting reform, but added “we need to make sure that it's not rhetoric.”

"I imagine he’ll get a fair amount of pushback from his congressional friends,” Strahorn said.

Joshua Lim is a fellow in the E.W. Scripps School of Journalism Statehouse News Bureau. You can reach him at joshielim93@gmail.com or follow him on Twitter at @JoshuaLim93.