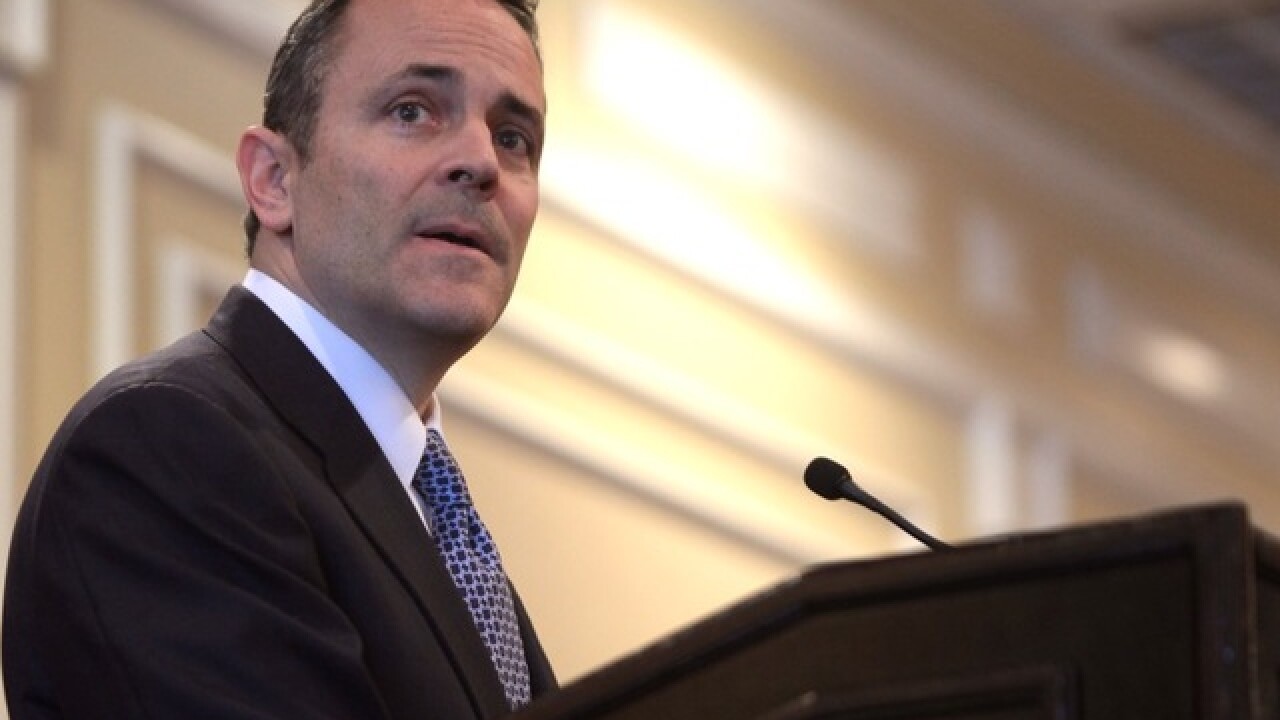 FRANKFORT, Ky. -- Kentucky's Democratic attorney general sued the state's Republican governor on Monday, arguing he overstepped his authority when he ordered budget cuts for state colleges and universities without the approval of the state legislature.

Attorney General Andy Beshear, the son of a former governor, followed through on his threat to file a lawsuit challenging Bevin's "blatant violations" of law by unilaterally cutting 4.5 percent, or $41 million, from the state's colleges and universities in the last three months of the fiscal year.

RELATED: NKU may sell WNKU because of cuts

"I do not take any joy or satisfaction out of this action," Beshear said at a state Capitol news conference. "Over the last seven days, it was my hope that the governor would listen to reason, comply with the law and rescind his order. He did not."

Beshear said his suit filed in Franklin County Circuit Court was an answer to Bevin's "unconstitutional and illegal order." He wants a judge to force the governor to release the funds to the schools. Beshear is requesting expedited court review.

Bevin spokeswoman Jessica Ditto said the governor's office strongly disagrees with Beshear's action and "will respond as necessary in court."

This is not the first time a Democratic attorney general has sued a Republican governor in Kentucky. In 2004, then Attorney General Greg Stumbo challenged former Gov. Ernie Fletcher's attempt to enact a state budget after the legislature failed to pass one. The state Supreme Court ruled against Fletcher.

"I think (Beshear) will win. I predict it," Stumbo told reporters on Monday.

Bevin, who took office in late 2015, has proposed $650 million in state spending cuts over the next two years in a plan to begin paying down the state's public pension debt, estimated at more than $30 billion. His proposal included the budget reductions for colleges and universities.

State lawmakers rejected that plan. They have still not approved a two-year state spending plan with time winding down in the legislative session, but neither the House nor the Senate included current-year cuts for colleges and universities in its budget proposals.

"His actions violate the governor's constitutional duty to faithfully execute the laws passed by the General Assembly," the attorney general said.

Beshear said it was the governor's "view of his power" - treating a budget passed by state lawmakers as "merely a suggestion" - that compelled the lawsuit. Without court action reining in his action, Beshear said, a governor could unilaterally cut any part of the state budget.

"Folks, that's the type of absolute power that the U.S. Constitution, the Kentucky Constitution and our laws explicitly forbid," he said. "It is a direct challenge to our liberty and our way of life, and it's my job to stand up to anyone who claims to have that power."

The lawsuit escalates what has become a political feud between Bevin, Beshear and the attorney general's father, former Democratic Gov. Steve Beshear, who could not seek re-election last year due to term limits.

Before Bevin took office, he called Steve Beshear an "embarrassment" after the then-governor appointed his wife to an unpaid position to the board of directors for the Kentucky Horse Park.

"This is not political," Andy Beshear said Monday. "It's not Democrats versus Republicans. It's not about upcoming or future elections. It's not Bevin versus Beshear. It's not even about pensions versus higher education. It's about the law and my duty as attorney general to enforce it. And it's not personal. No governor has the power to do what this governor has done."

In another sign of the growing acrimony, however, Bevin's spokeswoman in her response to the lawsuit pointed to a scandal involving Andy Beshear's former top assistant in the AG's office.

A document unsealed in federal court last month accused Timothy Longmeyer of taking more than $200,000 in kickbacks. Longmeyer is a former Kentucky Personnel Secretary during Steve Beshear's administration as governor, and he served as deputy attorney general for Andy Beshear until resigning last month. Andy Beshear has said he was assured that no one else in his office was implicated in the scandal.

"Given the amount of alleged corruption and personnel problems in the Office of Attorney General and his father's administration, it is clear that he is attempting to deflect attention away from his own challenges," Ditto said in her statement.