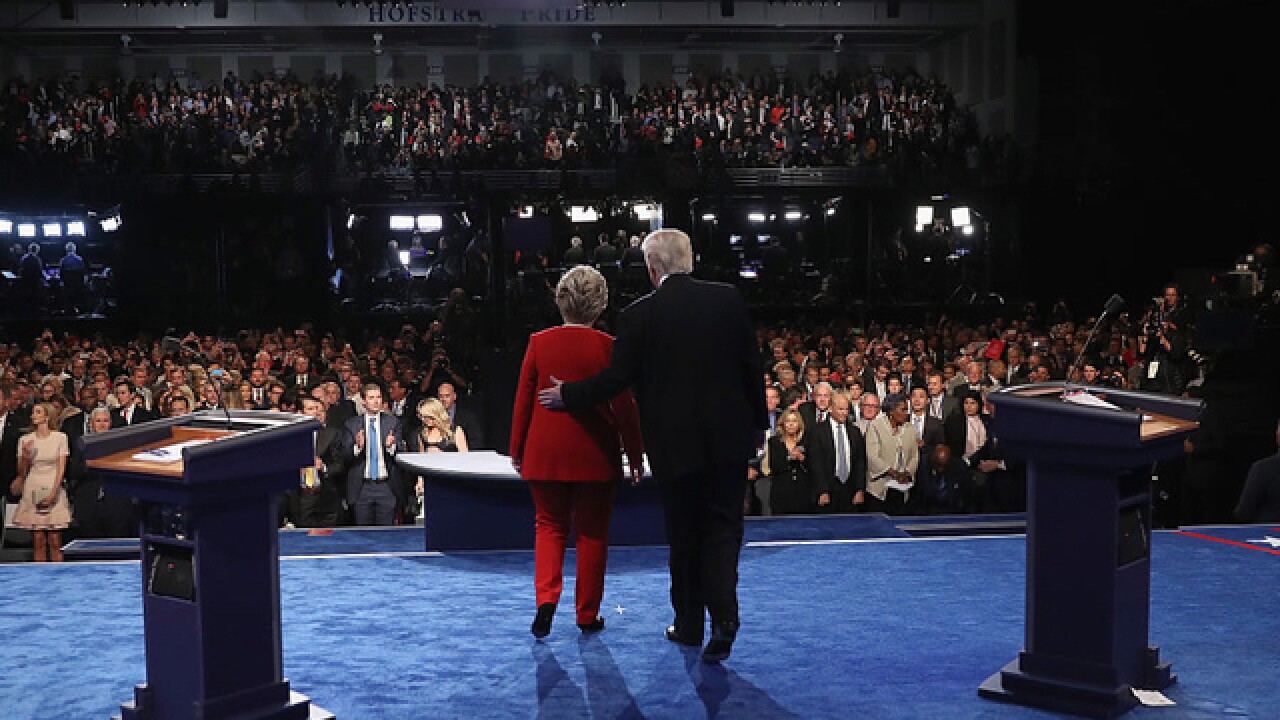 Hillary Clinton and Donald Trump faced off in the first presidential debate Monday, hitting familiar notes on the economy, national security and each other’s records. Our partners at Politifact judged their truthfulness throughout the event.

This is a claim Trump made in a Republican primary and it’s Mostly False. Though China does have significant economic ties to North Korea, Trump is exaggerating the amount of leverage it has. The fact that North Korea conducted a nuclear test over the strenuous objections of China suggests that Beijing lacks anything approaching "total control" over North Korea.

Trump: Clinton and President Obama think the greatest threat to the world is climate change

The claim about Obama is one we previously heard from an Arizona sheriff. That’s Mostly False. Obama does consider climate change a great threat, but Obama has repeatedly said terrorism is the most urgent priority.

Clinton: The United States "got a lid" on Iran’s nuclear program without firing a single shot

If you define "got a lid" as "keep in check," then Clinton has a plausible case. Though there are a lot of uncertainties about how well the accord will hold up, experts said the deal is both effective and close to the best outcome the United States could have achieved. Clinton’s claim is Mostly True.

Trump: "I did not support the war in Iraq"

We could only find one example of Trump commenting on the Iraq War before the invasion where he seemed apprehensive but not vehemently opposed to the operation. In another interview, Trump said he supported the invasion. We rated Trump’s denial is False.

Trump says NATO started focusing on terrorism because of him

This is False. The change he referred to was the creation of a new intelligence post — an incremental change in how the alliance addresses terrorism. It’s been engaging in counter-terrorism measures for more than 30 years.

Trump on "taking the oil"

Trump is right that he’s been suggesting taking ISIS’ and Iraq’s oil assets for quite some time. But experts told us the idea is nonsensical and not legal.

This is True. The government in 1973 accused Trump, his father and Trump Management of violating the Fair Housing Act, part of the Civil Rights Act of 1968. The case alleged Trump’s realty company discriminated against non-white tenants and potential tenants at numerous apartment complexes. The company settled the claim and Trump never admitted guilt.

After backing away from his years-long campaign questioning President Barack Obama’s birthplace, Trump accused Clinton of starting the birther movement. That’s False. There is no evidence tying birtherism to Clinton or her camp.

A reporter has claimed that Sidney Blumenthal, a Clinton advisor, urged him to look into Obama’s birthplace in the heat of the Democratic primary in 2008. But Blumenthal denies this, so it’s one man’s word against another’s. Furthermore, we found new evidence that the "founding father of birtherism" was actually a prolific anti-Muslim blogger who floated the theory in right-wing forums.

Trump, in contrast, encouraged hackers to check out Obama’s place of birth as late as September 2014.

Trump: Clinton used the term "superpredators" to refer to gangs

This is accurate. Clinton used the term in the 1990s, when speaking in support of her husband, Bill Clinton’s crime bill.

Clinton: African Americans more likely than whites to be arrested by police for same crimes

This is True. In a previous fact-check, we found a heap of evidence supporting this claim.

Clinton: Gun violence is the largest cause of death for young black men

True. Gun violence was responsible for more than 2,500 deaths of African American men between the ages of 15 and 24. That’s more than the next nine causes (such as heart disease and HIV) combined.

Trump argued that he was just taking advantage of existing business laws when he declared bankruptcy four times. Actually it’s six times, but he shouldn’t shoulder all of the blame.

Clinton: Maybe Trump isn’t as charitable as he could be

Clinton suggested that Trump’s tax returns contain information about how much (or how little) he has donated to charity through the years. As the Washington Post’s David Fahrenthold has reported, Trump hasn’t donated to his own foundation since 2008 and spent some of the foundation’s money to buy a 6-foot-tall painting of himself.

Trump on financial disclosures being better than tax returns

Pressed by moderator Lester Holt on why he hasn’t released his tax forms, Trump said there’s more to learn in financial disclosures, which is legally required. This is False. Experts we spoke to consider the form a red herring and said tax returns offer more valuable details.

Trump on weak economic recovery from the recession

During a Republican primary debate, former candidate and current Trump supporter Chris Christie said the United States is in the worst recovery since World War II. We rated that claim Half True. In terms of GDP growth, this is accurate but looking at the employment picture, the 2001 recovery was worse.

After he accepted the Republican nomination, Trump claimed that "Hillary Clinton says she wants to, 'raise taxes on the middle class.'" Pants on Fire! According to the transcript, numerous reporters, experts and a computer program, Clinton said the exact opposite.

This is accurate. We gave Clinton a Full Flop for her changed position on this issue.

Clinton brought up her opposition to the Dominican Republic-Central America Free Trade Agreement (DR-CAFTA). But this is cherrypicked. She has also voted to support five of them and supported an additional three.

Trump says he did not call climate change a hoax

This denial is not entirely accurate. Trump did tweet that view in 2012, though he made efforts earlier this year to describe that remark as a "joke."

Clinton: Trump’s tax plan would blow up the debt by trillions of dollars

We took a look at Trump’s tax plan during the Republican primary. Free market-oriented and liberal groups alike say Trump’s tax plan would lead to a $10 trillion revenue loss, even if it did create economic growth.

This is Mostly True. He said on more than one occasion that he welcomed a downturn in the real estate market because it would give him a chance to buy properties at a bargain and sell them at a higher price later.

Trump: Thousands of jobs are leaving

At an April campaign stop in Pennsylvania, Trump said the state had lost 35 percent of its manufacturing jobs since 2001. This checks out.

Trump: China is using the United States as a piggy bank

This is similar to Trump’s previous claim that "we’ve rebuilt China." This rates Half True. China’s economic growth can be largely attributed to its in-house reforms and inclusion in global trade. The United States can take some credit, but certainly not all, all the credit for the latter.

Clinton on the minimum wage

During the Democratic primary, Clinton’s rival, Sen. Bernie Sanders of Vermont, made the point that Clinton advocated for a $12 minimum wage. This is Mostly True.