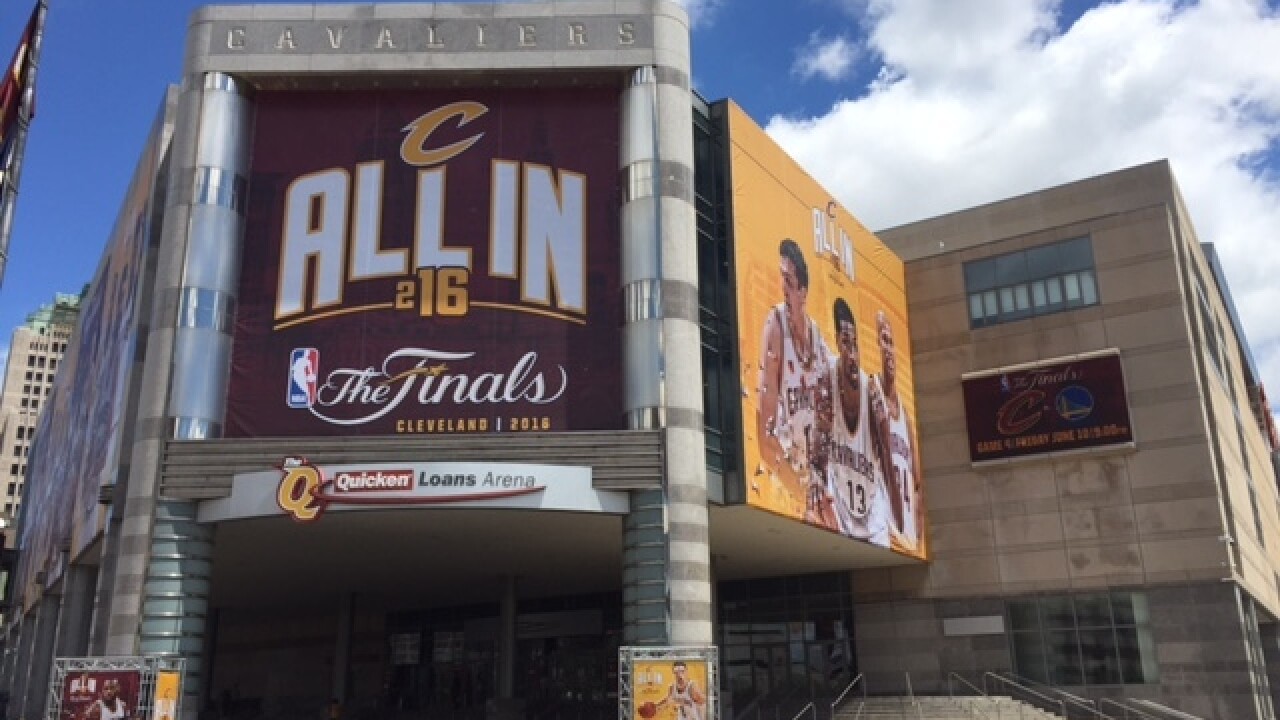 <p>Over the course of a little more than two months, Clevelan's Quicken Loans Arena will play host to the NBA Finals and what promises to be one of the most memorable Republican National Conventions in recent history. (Chris Riva/WCPO)</p>

CLEVELAND, Ohio — The national spotlight will shine on Cleveland for the next six weeks as the city is hosting both the NBA Finals and what is promising to be one of the most watched Republican National Conventions ever from July 18 to 21.

There are 38 days between now and then, and while the city is caught up in NBA fever, it is also working to get ready for the convention, which will include a massive make over to Quicken Loans Arena.

“Normally it is a six or seven week process to build out a convention space from an NBA or hockey arena,” said the RNC’s Dave O’Neil. “This time we will get only about 4 weeks if the Cavs take it to game six, which looks pretty likely.”

Every square inch of the arena will be used. Showers will be office space as the facility will be transformed. Crews will move walls, repaint and lay down new cable as they build a stage to officially nominate Donald Trump as the GOP’s next presidential candidate.

The reason Cincinnati had to withdraw from its bid to host the convention is largely in part because U.S. Bank Arena could not facilitate the number of guests — even with a massive makeover.

The Republican National Convention Host Committee is estimating the convention will bring 50,000 visitors with 15,000 credentialed media.

“Outside of the Summer Olympics in Rio, this will be the second most credentialed event in the entire world, and it is happening here in Ohio,” said O’Neil.

Cleveland is approaching the RNC a lot like Cincinnati did with the Major League Baseball All-Star game, as a way to showcase the city.

The two major events have the community beaming with pride that almost never happens in Cleveland. The city has struggled for decades as businesses left, jobs were lost and the cities beloved sports teams continued to lose.

“That is the cool thing about having 50,000 people coming here. We are estimating about 80 percent have never been to Cleveland before,” said O’Neil. “They have heard the jokes. Sorry, Sam Wyche, we are excited to be here in Cleveland.”

David Gilbert, president and CEO of the Cleveland 2016 Host Committee, put it another way: “This might be unique to our region, but this event might finally help the area in getting over our ‘woe is us attitude.’”

“The real benefit is long term,” Gilbert said from the host committee’s conference room. “It is not about convention week, it is about what kind of investments happen from the people that were here, people who see the city, people that move here and people that choose to do business here.”

To put the best foot forward beautification projects are in full force throughout the downtown area. Trees are being planted, roads repaved and touchups to some overdue projects.

The city knows all of this means nothing if the convention is not safe. Safety is a top concern.

The Secrete Service has been working with local and county officials for a year on keeping the area safe.

“We expect Cleveland to be one of the safest places in the world that week,” said O’Neil.

The city knows what is coming with Trump. They have watched it unfold along the campaign trail for months.

“At any political convention, you expect protestors. They have certainly been out in full force throughout 2016 and we expect them to be in Cleveland,” O’Neil said. “We want everybody to have their First Amendment right to free speech and their protest to be heard.”

It appears the NBA Finals are the final safety check before the RNC. During the game Wednesday night roughly 10,000 fans packed the areas surrounding the arena.

Local police and members of the FBI were dressed in full tactical gear in case of any unrest. Law enforcement positioned themselves on the rooftops of nearby buildings, watching over the crowd.

“We know pretty much anything that could happen, and we are ready for it,” said O’Neil.

Friday night the Finals continue in Game 4 between the Cavaliers and Warriors. The fans in Cleveland hope their team wins a few more games before politics take center court.