In Columbus, Clinton aims to disqualify Trump on handling of economy 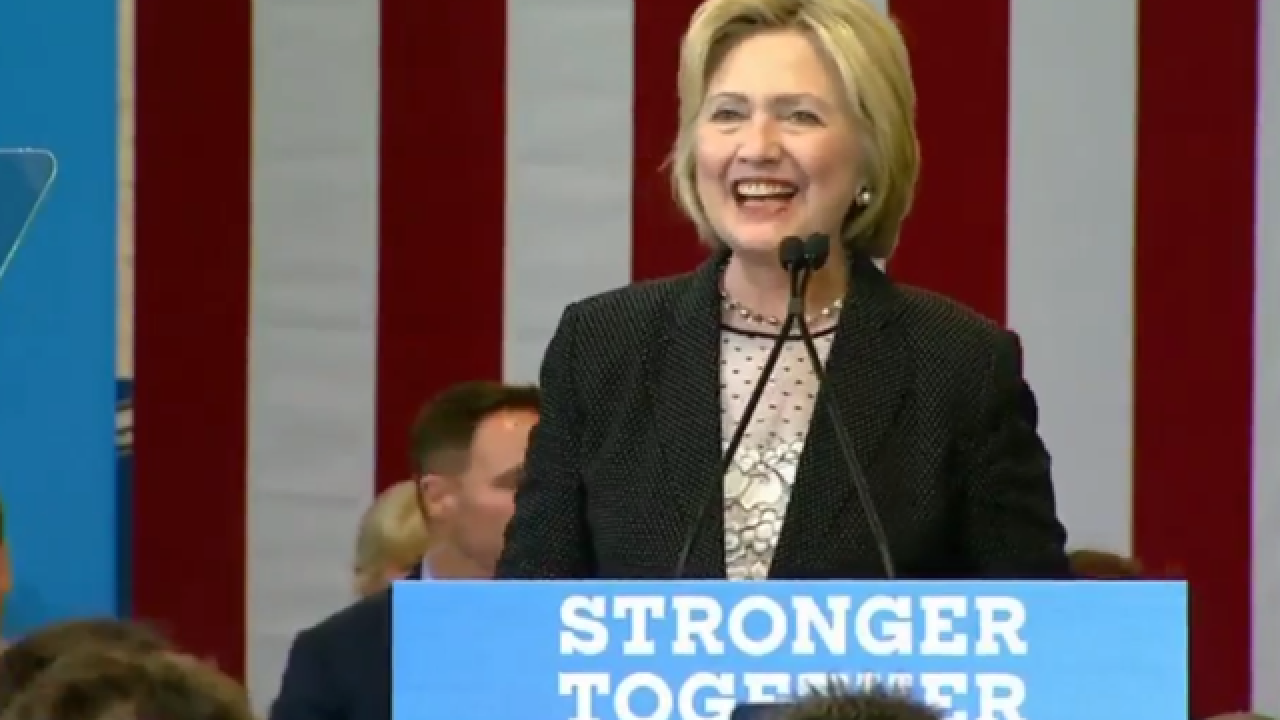 Clinton's address in Ohio, one of the most important swing states, sought to define Trump as little more than an economic con man, whose ignorance and ego would tank the global economy, bankrupt Americans and risk the country's future.

"Every day we see how reckless and careless Trump is. He's proud of it," Clinton said. "Well that's his choice. Except when he's asking to be our president. Then it's our choice."

The speech was similar to one earlier this month in which she tried to undercut Trump's foreign policy credentials. This time, at an alternative high school in Columbus, Clinton questioned Trump's temperament to guide the economy and repeatedly pointed to his business record as evidence of how he would treat small businesses and working families if he was elected.

"He's written a lot of books about business. But they all seem to end at chapter 11," she said, in an allusion to the U.S. bankruptcy code.

Trump responded on Twitter as Clinton delivered her address, writing in one tweet: "How can Hillary run the economy when she can't even send emails without putting entire nation at risk?" He appeared to be referring to Clinton blending her personal and official emails on a homebrew server in her house, while she was secretary of state.

The businessman later appeared to embrace one of Clinton's attack lines, writing: 'I am "the king of debt.' That has been great for me as a businessman, but is bad for the country. I made a fortune off of debt, will fix U.S."

I am "the king of debt."That has been great for me as a businessman, but is bad for the country. I made a fortune off of debt, will fix U.S.

Clinton used Trump's own statements to undercut his economic credentials, pointing to remarks he made that that U.S. could sell off assets, default on its debt and that wages are too high. She also repeated a comment he made that pregnant employees are an "inconvenience."

PLUS: Will local evangelicals turn out for Trump?

Clinton said financial markets often "rise and fall" on comments by presidential candidates. Suggesting the United States could default on its debt could cause a "global panic," she added.

She also seized on a report Monday by Moody's Analytics which found Trump's plans would lead to a "lengthy recession," costing nearly 3.5 million American jobs. She said economists of all ideologies agree that Trump's ideas "would be disastrous" and pointed to opposition to Trump from both 2012 GOP presidential nominee Mitt Romney and liberal Massachusetts Sen. Elizabeth Warren.

Trump has pointed to trade as a major difference with Clinton, saying last week that her support of past trade deals, such as the North American Free Trade Agreement, has cost the country "millions of jobs."

He also has assailed her promotion of the Trans-Pacific Partnership trade deal as Obama's secretary of state as a sell-out of U.S. workers. Clinton announced her opposition to the TPP last October, saying it failed to meet her test of providing good jobs, raising wages and protecting national security.

Brushing it aside, Clinton said there was a difference between "getting tough on trade" and starting "trade wars."

Clinton's Columbus campaign stop came on the same day a new Quinnipiac University Swing State Poll shows her tied with Trump in Ohio, both at 40 percent. That's a slight shift from early May, when Trump led 43 percent to Clinton's 39 percent. Including third-party candidates Gary Johnson, the Libertarian Party candidate, and Jill Stein, the Green Party candidate, Clinton holds a small lead at 38 percent, with Trump at 36 percent, Johnson at 8 percent and Stein at 3 percent.

Bolstered by more than $40 million in television advertising, Clinton and her Democratic allies are trying to use this period before next month's Democratic National Convention to disqualify Trump among moderate voters on the economy and prevent him from successfully wooing working-class voters in battleground states like Ohio, Wisconsin and Michigan.

Fundraising reports filed Monday showed Clinton with a big fundraising advantage, starting the month with $42 million in the bank compared with Trump's $1.3 million in cash on hand.

Clinton also planned to make a more proactive case on the economy Wednesday in Raleigh, North Carolina. Jake Sullivan, the campaign's senior policy adviser, said she would lay out the "progressive economic agenda" to help workers who have not yet benefited from the economic recovery.

While the twin speeches sought to set an economic framework for the general election, Clinton's pitch was also aimed at Democratic voters who supported Vermont Sen. Bernie Sanders, who has not yet endorsed Clinton or conceded the nomination to her.

The campaigns of Clinton and Sanders are discussing ways of addressing key economic issues in the Democratic platform which will be approved at the Philadelphia convention, including the TPP pact, providing free college tuition and cutting student debt and expanding Medicare and Social Security.