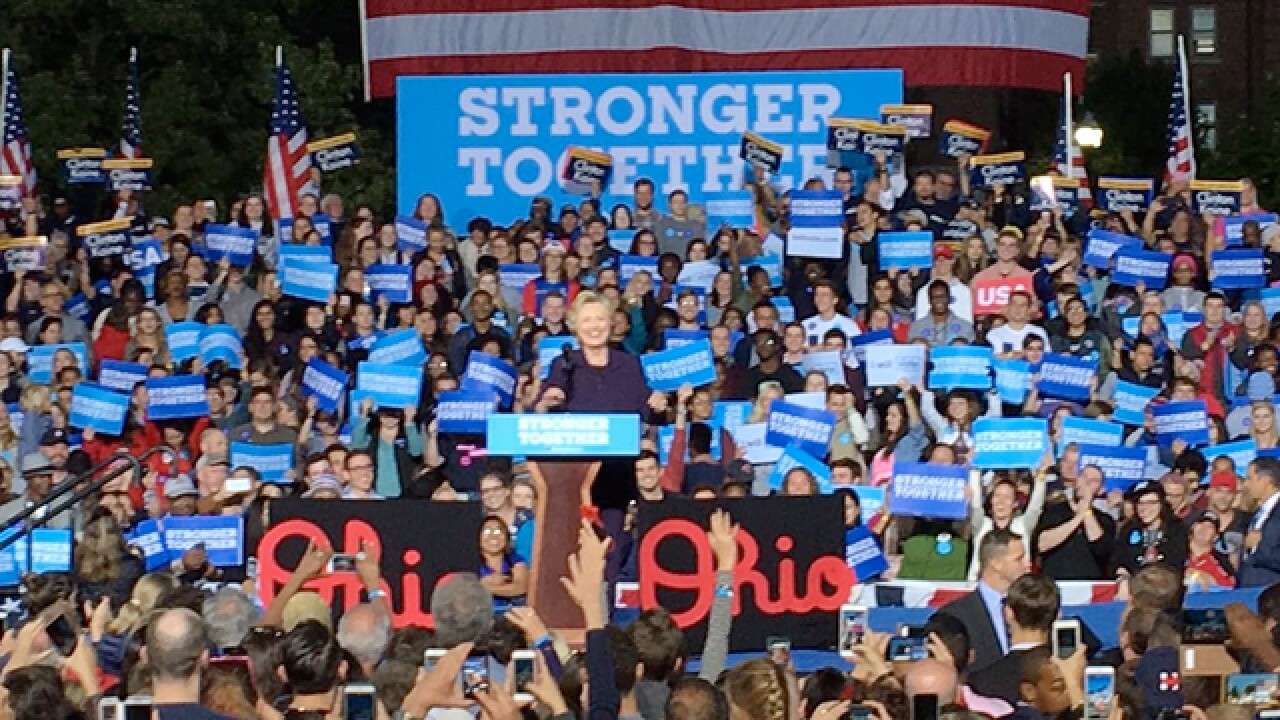 <p>Hillary Clinton makes a speech at a rally in Columbus.</p> COLUMBUS, Ohio -- Hillary Clinton held one of her largest rallies ever Monday night, drawing more than 18,000 supporters to Ohio State University the day after a heated debate with Republican candidate Donald Trump.

Clinton and Trump faced each other Sunday night for one of the most heated debates in modern times . It came just two days after leaked video revealed Trump making lewd comments about women in 2005. In it, he describes a failed attempt to sleep with a married woman and bragged that women let him kiss and grope them without permission because he's a star.

That's led to a growing list of Republican lawmakers withdrawing their support for Trump and calling for him to step aside. Trump has apologized for the comments, and at Sunday night's debate, he denied groping and kissing women without their consent.

"There was a lot about last night that was hard to believe," Clinton said of the town hall-style debate, which covered topics including clean energy and the United States’ relationship with Russia. “So don’t. Donald Trump spent his time last night attacking me when he should have been apologizing."

Clinton’s courtship of Columbus comes at a crucial time: voter registration closes Tuesday, and there are just 30 days left before the country is called upon to decide between Clinton and Trump. Ivanka Trump, daughter of the Republican candidate, visited Middletown last week, and Trump himself will hold his first Cincinnati rally in U.S. Bank Arena Thursday.

ELECTION GUIDE: See if you're registered, where to vote

Clinton reiterated her commitment to keeping taxes low for the middle class and drew cheers from the crowd with her next promise, which came from a joint proposal with former primary rival Bernie Sanders.

"We want anyone from a family that makes less than $125,000 a year to go to Ohio State University tuition free," she said.

OSU student Derek Verhoff said he believed Clinton would represent the United States positively in front of other world leaders.

"She represents us very well," said OSU student Derek Verhoff. “Much better, obviously, than her opponent."

And the so-called "Trump tapes" played in Clinton’s favor for much of the audience.

"I am so sick and tired of hearing about (Trump’s) views of women, just degrading and I’m sickened by it," said Kay Davenport.

President Barack Obama, a surrogate for the Clinton campaign, will visit the state Thursday for the Ohio Democrats' annual state dinner.

FACT CHECK: Who lied about what in second debate?