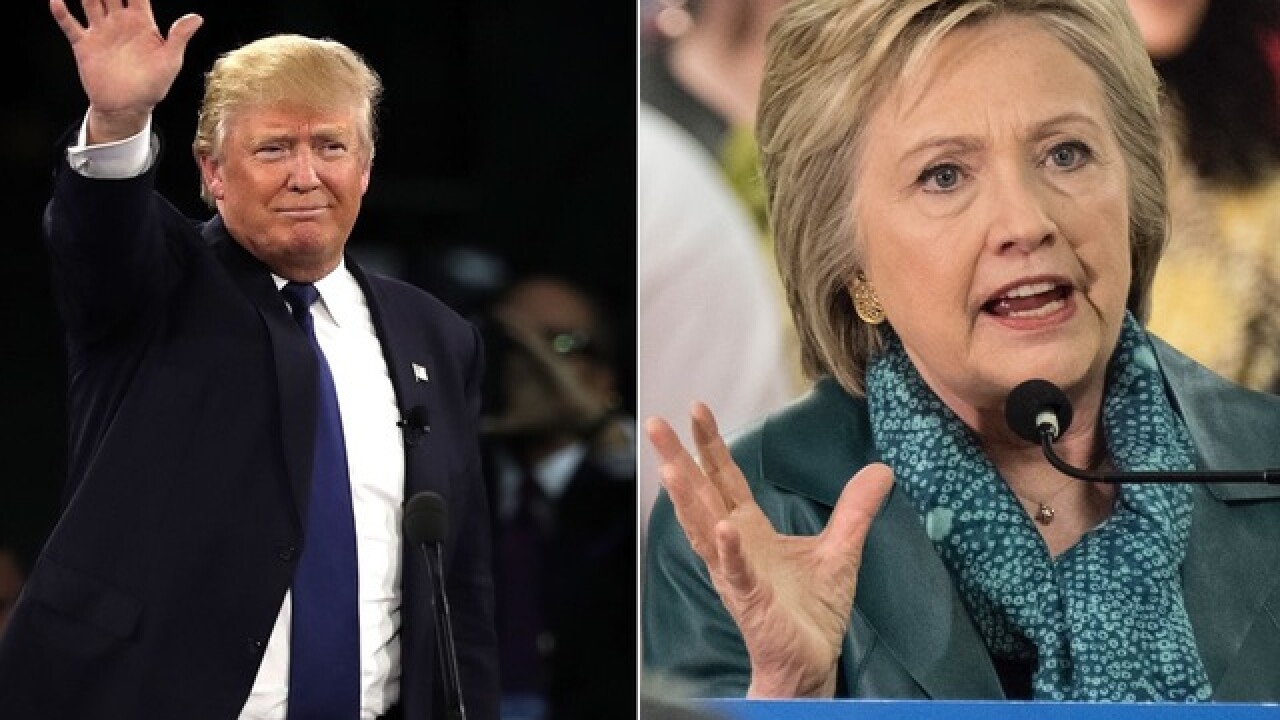 WASHINGTON -- Under a fresh cloud of overseas violence, Donald Trump and Hillary Clinton added to their delegate troves on Tuesday with victories in Arizona as the 2016 presidential contest turned into a clash of would-be commanders in chief.

Long lines and high interest marked primary elections across Arizona, Utah and Idaho that were largely an afterthought for much of the day as the world grappled with a new wave of bloody attacks in Europe. The Islamic State group claimed responsibility for blasts in Brussels that left dozens dead and many more wounded.

Yet there was a frenzy of activity in Utah as voters lined up to caucus and the state Democratic Party's website crashed due to high traffic. In Arizona, voters waited two hours to cast primary ballots in some cases, while police were called to help control traffic and at least one polling place ran out of ballots.

Trump's Arizona victory gives him the all of the state's 58 delegates, a setback for his underdog challengers, who are running out of time to slow his march to the 1,237 delegates needed to claim the nomination.

On the Democratic side, Arizona's delegates are awarded proportionally, giving Clinton most of the state's delegates. Arizona and Utah featured elections for both parties on Tuesday, while Idaho Democrats also held presidential caucuses.

The results from Arizona didn't bode well for Democrat Bernie Sanders and Republicans Ted Cruz and John Kasich, who need to reverse the sense of inevitability taking hold around both party front-runners.

As voters flooded to the polls, the presidential candidates lashed out at each other's foreign policy prescriptions, showcasing sharp contrasts in confronting the threat of Islamic extremism.

Trump charged that the United States has "no choice" but to adopt his proposed temporary ban on Muslims entering the country to prevent the spread of terrorism. He described as "eggheads" those who respect international law's ban on torture, the use of which he argued would have prevented the day's attacks.

Trump predicted Muslim immigrants would launch attacks on American soil next. "It's going to start happening more and more here because we're allowing so many in," he told Fox News.

Clinton and Trump's Republican rivals, meanwhile, questioned the GOP front-runner's temperament and readiness to serve as commander in chief, and condemned his calls to diminish U.S. involvement with NATO.

"We don't build walls or turn our back on our allies. We can't throw out everything we know about what works and what doesn't and start torturing people," Clinton told supporters in Seattle, where as she celebrated her Arizona win. "We need a commander in chief that can provide leadership that is strong, smart and, above all, steady."

Cruz seized on Trump's foreign policy inexperience while declaring that the U.S. is at war with the Islamic State group.

"He doesn't have the minimal knowledge one would expect from a staffer at the State Department, much less from the commander in chief," he told reporters. "The stakes are too high for learning on the job."

The debate between the two took a detour late Tuesday night as they engaged in an unusual Twitter exchange about their wives.

The billionaire warned Cruz he would "spill the beans on your wife" after an anti-Trump outside group ran an ad in Utah featuring Trump's wife, Melania, in a photo shoot that ran in GQ magazine more than a decade ago.

Cruz shot back with a tweet of his own, saying in part, "Donald, if you try to attack Heidi, you're more of a coward than I thought."

Trump's brash tone has turned off some Republican voters in Utah, where preference polls suggest Cruz has a chance to claim more than 50 percent of the caucus vote -- and with it, all 40 of Utah's delegates. Trump could earn some delegates should Cruz fail to exceed 50 percent, in which case the delegates would be awarded based on each candidate's vote total.

Trump supporter Easton Brady, 19, of Provo, Utah, cheered the billionaire's brash style, even as he acknowledged Trump doesn't play as well in Utah as other parts of the country.

Arizona's win gives Trump a little less than half the delegates allocated so far. That's still short of the majority needed to clinch the nomination before the party's national convention this summer.

However, Trump has a path to the nomination if he continues to win states that award all or most of their delegates to the winner. Overall, Trump has accumulated 739 delegates, Cruz has 425 and Kasich 143.

On the Democratic side, Clinton's delegate advantage is even greater than Trump's.

The former secretary of state is coming off last week's five-state sweep of Sanders, who remains popular among his party's most liberal voters but needs to improve his performance if he expects to stay relevant. The Vermont senator, now trailing Clinton by more than 300 pledged delegates, had targeted Tuesday's races as the start of a comeback tour.

Despite the loss in Arizona, Sanders predicted victory in both Utah and Idaho as he cheered "record-breaking turnouts" Tuesday night in the three states.

"This is your campaign," Sanders told supporters in San Diego. "Join us."