Clinton calls off plans to travel to West Coast 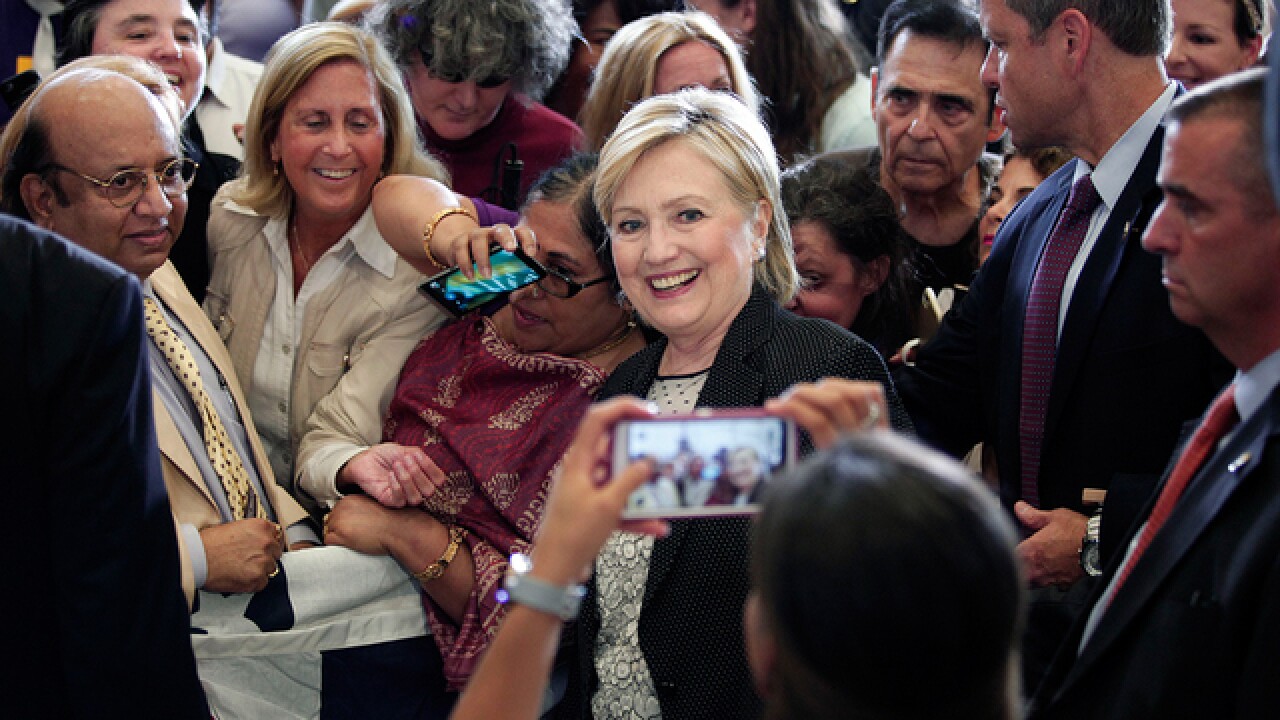 NEW YORK (AP) —Hillary Clinton is calling off plans to visit the West Coast on Monday and Tuesday following a health episode at the 9/11 memorial.

Clinton abruptly left the anniversary ceremony on Sunday morning and needed to be held up by three people before she appeared to stumble off a curb and was helped into a van.

Several hours later, her campaign revealed she was diagnosed with pneumonia on Friday and advised to rest.
Her doctor said Sunday evening that Clinton had become overheated and dehydrated at the event in lower Manhattan. Dr. Lisa R. Bardack says Clinton is now "recovering nicely" at home.

The Democratic nominee was scheduled to attend fundraisers on Monday and Tuesday in California, and tape an episode of Ellen DeGeneres' talk show.
___

Hillary Clinton's doctor says the Democratic presidential nominee was diagnosed on Friday with pneumonia, put on antibiotics and advised to rest and modify her campaign schedule.

Dr. Lisa Bardack says in a statement that Clinton is "recovering nicely" after attending a Sept. 11 anniversary event in lower Manhattan. Clinton was seen on video appearing to struggle to stay on her feet as she got into a vehicle to leave the event.

Bardack says Clinton has been experiencing a cough related to allergies, and in a follow-up examination Friday of her cough, Clinton was diagnosed with pneumonia.

The statement says Clinton became overheated at the 9/11 event and dehydrated, but is now rehydrated.
___

Sen. Chuck Schumer says Hillary Clinton seemed "fine" just before she left the 9/11 memorial ceremony and was captured on video appearing to struggle to stay on her feet.

The New York senator said in a statement Sunday that he and the Democratic presidential nominee "chatted for quite a while" about their memories of the tragic attacks, when both were senators from New York.

He said, "It was pretty hot out there, but she seemed fine to me, and left on her own accord."

Clinton later went to daughter Chelsea's house nearby and emerged telling reporters that she felt much better.
___

Hillary Clinton is back at her suburban New York home, after having left the 9/11 memorial ceremony in lower Manhattan early because she was feeling "overheated."

Clinton's campaign says the former secretary of state arrived at her home in Chappaqua shortly before 2 p.m. The journalists who travel with her campaign were not there to witness her arrival.

Clinton left the annual remembrance event Sunday morning and headed to her daughter's nearby apartment. She departed a short time later, saying she was "feeling great." Wearing sunglasses, she paused to take a photo with a young girl before getting into her motorcade.

Videos of Clinton leaving the 9/11 event show her stumbling and needing help from staff to get to the van.
___

A Democratic congressman who stood behind Hillary Clinton at a Sept. 11 memorial ceremony says he chatted with the Democratic candidate beforehand and that "she did not seem out of the ordinary at all" although the conditions were "stiflingly hot."

In a telephone interview, Rep. Joe Crowley of New York told The Associated Press that at one point, he saw what he thought was a staff member tap Clinton on her shoulder. The person "said something like, 'We're going to move now,'" Crowley said.

Crowley said that despite the temperate weather outside, heat was an issue for those standing on the cobblestones at the ceremony. He said he was sweating through his shirt.

"We were begging for some kind of wind," Crowley added.
___

A video posted on Twitter shows Hillary Clinton from behind held closely by a member of her staff, before slumping and being helped into a waiting van as she leaves the 9/11 memorial service in New York.

Clinton's campaign says the former secretary of state left the annual remembrance event on Sunday after feeling "overheated." She retreated to her daughter's apartment. She left a short time later, saying she was "feeling great."

The video shows Clinton waiting curbside for a van to arrive. She is surrounded by her Secret Service detail, and a staff member is standing next to her and appears to be tightly holding her left arm.

Clinton stumbles as she tries to step forward into the van, and is then helped inside the vehicle.
___

The Democratic presidential nominee walked out of her daughter Chelsea's apartment in Manhattan just before noon on Sunday.

Clinton's campaign says the former secretary of state left the morning ceremony after a 90-minute visit. They say she "felt overheated" and left for the nearby apartment.

Her campaign has not offer additional details, including whether Clinton required medical attention.
___

Clinton spokesman Nick Merrill says in a statement Sunday that the former secretary of state attended the morning ceremony for 90 minutes "to pay her respects and greet some of the families of the fallen.

He adds, "During the ceremony, she felt overheated so departed to go to her daughter's apartment, and is feeling much better."

The statement offered no additional details, including whether Clinton required medical attention.