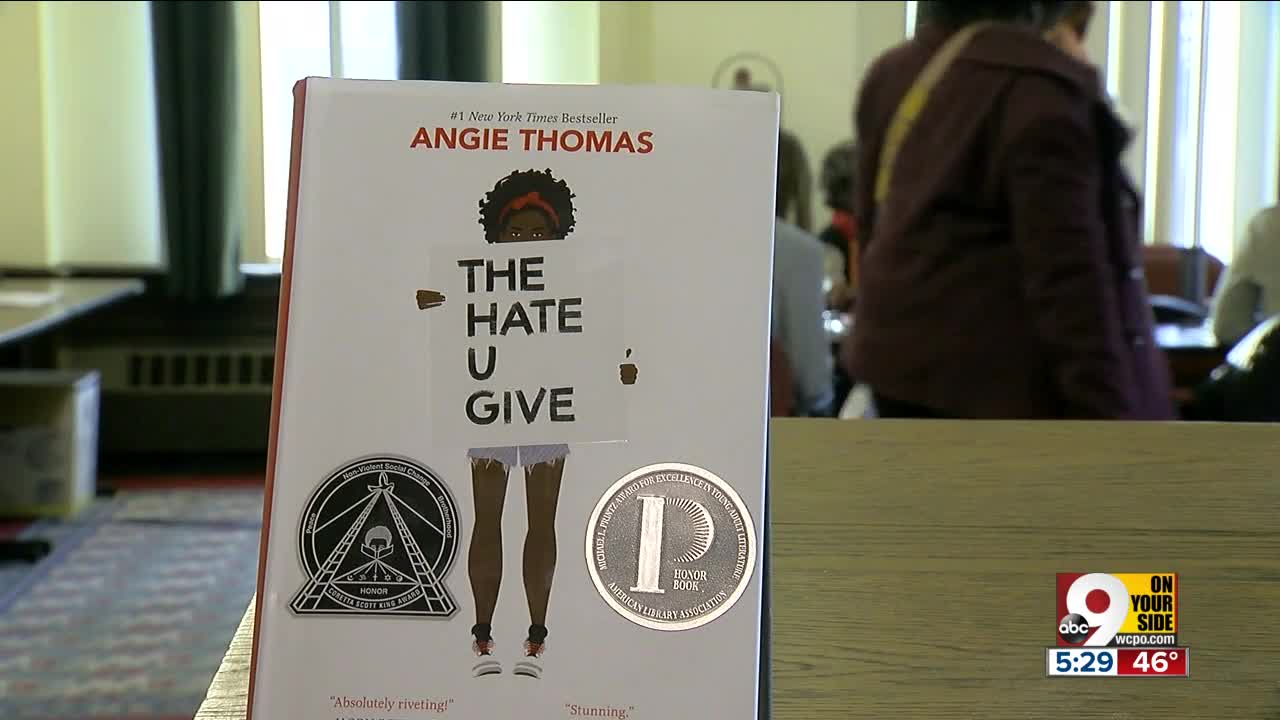 The YWCA of Greater Cincinnati hopes the powerful themes of "The Hate U Give" can help people across the Tri-State address real-life racial tensions and schisms. 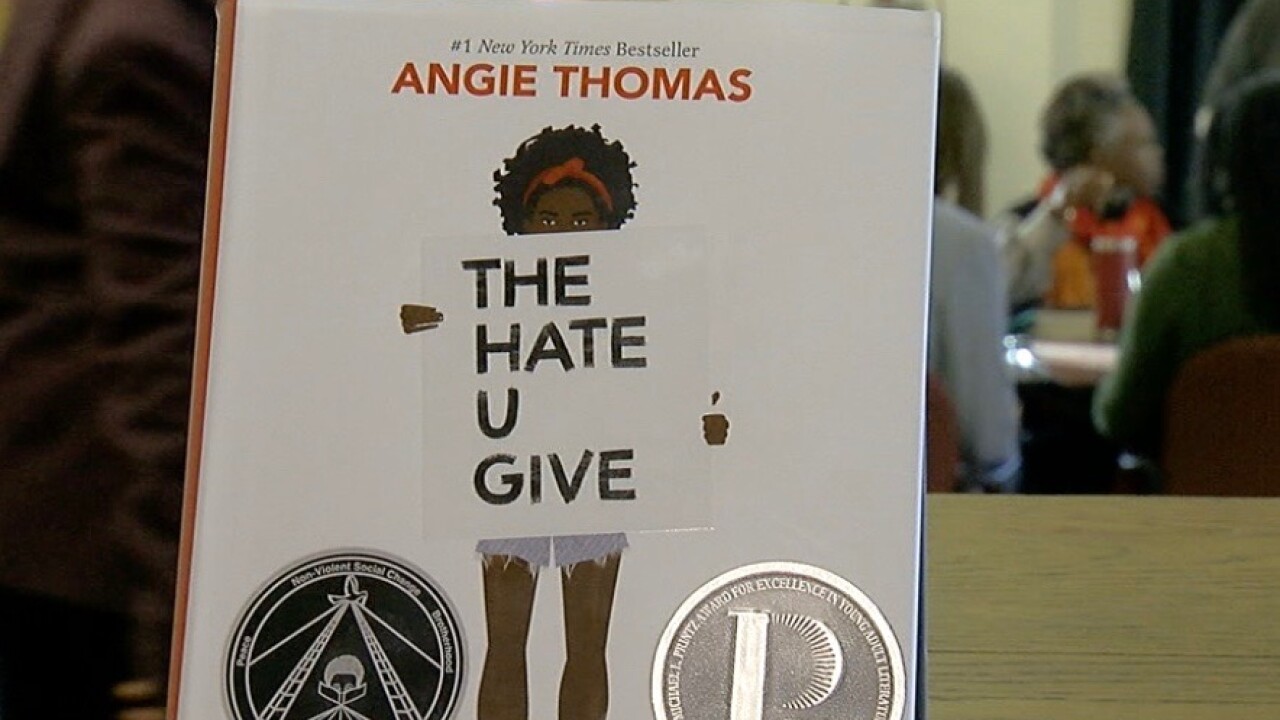 CINCINNATI — The story of Angie Thomas' "The Hate U Give" is all too familiar: a white police officer shoots an unarmed black man, ending a young life and throwing a community into turmoil.

The book is fiction, but the YWCA of Greater Cincinnati hopes its powerful themes can help people across the Tri-State address real-life racial tensions and schisms.

That’s why the organization’s racial justice committee proposed Real Reads, an initiative designed to start a community conversation and further people’s understanding of each other, said Alicia Townsend, vice president and community affairs manager with US Bank and the committee’s chair.

“What we wanted was to really take a look at how do we get this messaging outside of our four walls at the Y?” Townsend said. “Real Reads was birthed out of our book discussion.”

Starting Feb. 4, trained facilitators will lead a series of community discussions about the book at local libraries, community centers and book stores. The initiative will culminate in a screening of “The Hate U Give” film and a panel discussion on March 31 at Xavier University.

Olivia McKinney will be a facilitator for some of the book discussions and helped train other facilitators earlier this month. She said although “The Hate U Give” is a young adult novel, she thinks the book and community discussions have value for people of all ages.

“It can push adults to really have a conversation with our youth and say, ‘OK, let’s open this discourse and talk about these things,’” said McKinney, an 11th grade intervention specialist with Cincinnati Public Schools.

The committee chose to launch Real Reads with the young adult novel “The Hate U Give” by Angie Thomas because “the subject matter is so relevant,” Townsend said.

“While this was a fictional story, it could have been a news story,” added Karen Bankston, a member of the YWCA’s racial justice committee.

The power of stories

Bankston, an adjunct professor at the University of Cincinnati’s College of Nursing, will facilitate two of the book discussions. She and a colleague from UC also will work to evaluate the effectiveness of Real Reads.

“I am a believer that utilizing stories helps to ease the transition to some very difficult discussions,” she said.

Bankston and her colleague will survey participants in the discussion to gauge their thoughts about the book, their reaction to the discussions and how the experience influences their view of the YWCA, she said.

“I hope what we will see is that people say that reading the book and having the dialog caused them to think,” she said. “The other thing I hope it does is that it helps people to see the YWCA in a positive vein and in a leadership position as an organization that is prepared to help the community as it relates to resolving racism in our community.”

The goal of the program is to reach beyond the young adults who might normally pick up the novel at a book store or check it out from the library, Townsend said.

“We’re also trying to get this to policy makers and individuals that have the ability to change what happens,” she said. “The thought is that anyone who can vote and impact public policy, we want to reach, and we want to make sure they are aware of the issues that our community is dealing with on a day-in and day-out basis and how they could positively impact those issues.”

The Public Library of Cincinnati and Hamilton County looks forward to hosting some of the discussions as a partner in Real Reads, said David Siders, the library’s civic engagement coordinator.

“Our libraries have a long-standing mission to connect people with the world of ideas and information in an equitable manner,” Siders wrote in an email to WCPO. “Collaborating with the YWCA and other partners for Real Reads allows us to expand our reach to many community members across the region, to provide impactful opportunities for people to listen to each other’s experiences while discussing ‘The Hate U Give.’ Our intent is to cultivate lifelong learning for all, and in this case by reading, listening and sharing with others in regard to the vital issues raised in Thomas’ work.”

Townsend noted that there is still plenty of time to read the book and be part of the discussion. It doesn’t take long to finish the book, she said, adding, “It catches you quickly.”

‘You have a voice, and it matters’

McKinney first read the novel because she was interested in it and read it again in graduate school when a professor suggested it could be a good book to teach students.

She said the book makes a good starting point for important conversations. It has big lessons to teach, too, she said, namely “that you have a voice, and it matters.”

“When you start to look at our kids and you get this common notion of, oh, I’m 16, 17, what I say doesn’t matter,” she said. “Or, oh, I’m just one of 4 million people in America. My vote doesn’t count or my voice doesn’t matter because I can’t make a change.”

The book’s main character, Starr Carter, feels the same way after witnessing a police officer shoot one of her best friends.

“But by the end of the book, she realizes that her voice is powerful, and it’s the most important thing she has right now,” McKinney said. “And if she just speaks up and speaks out, she could totally make a difference in her community.”

McKinney said she would consider Real Reads a success if it leads to an “authentic discussion.”

“If maybe we could just question the way we live our lives and how we interact with other people and we have an honest discussion about that, I think that’s success for me,” she said. “It’s to get people’s minds going to where they actually are thinking about how they move in their everyday lives and how they react to people and how they respond to certain situations.”

Nobody expects hearts and minds to be transformed completely, Bankston said.

“But what I do know is that each of us can touch at least one person,” she said. “And if we can touch one person and make a difference, then it’s worth it.”

YWCA of Greater Cincinnati has more information online about Real Reads and where community discussions about “The Hate U Give” will take place.