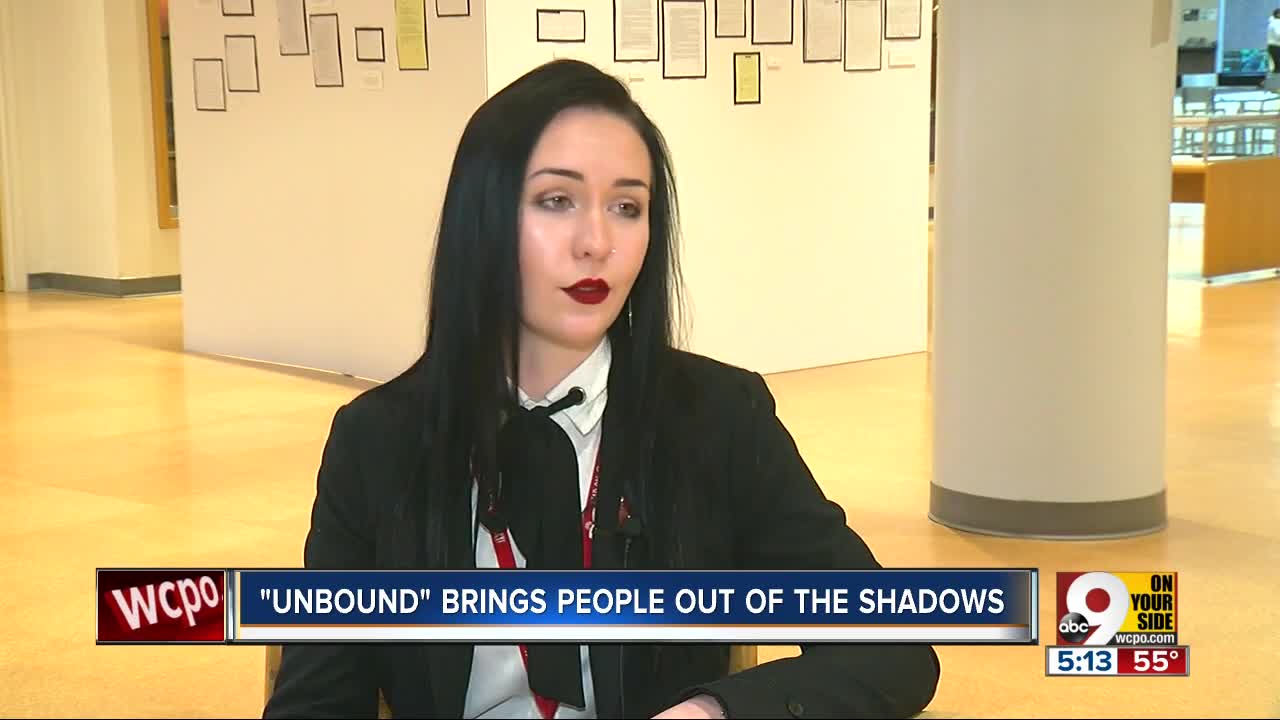 Forty poems, essays and drawings are part of an exhibit of work by men and women who have experienced incarceration. Called "Unbound," the exhibit runs through Jan. 31. 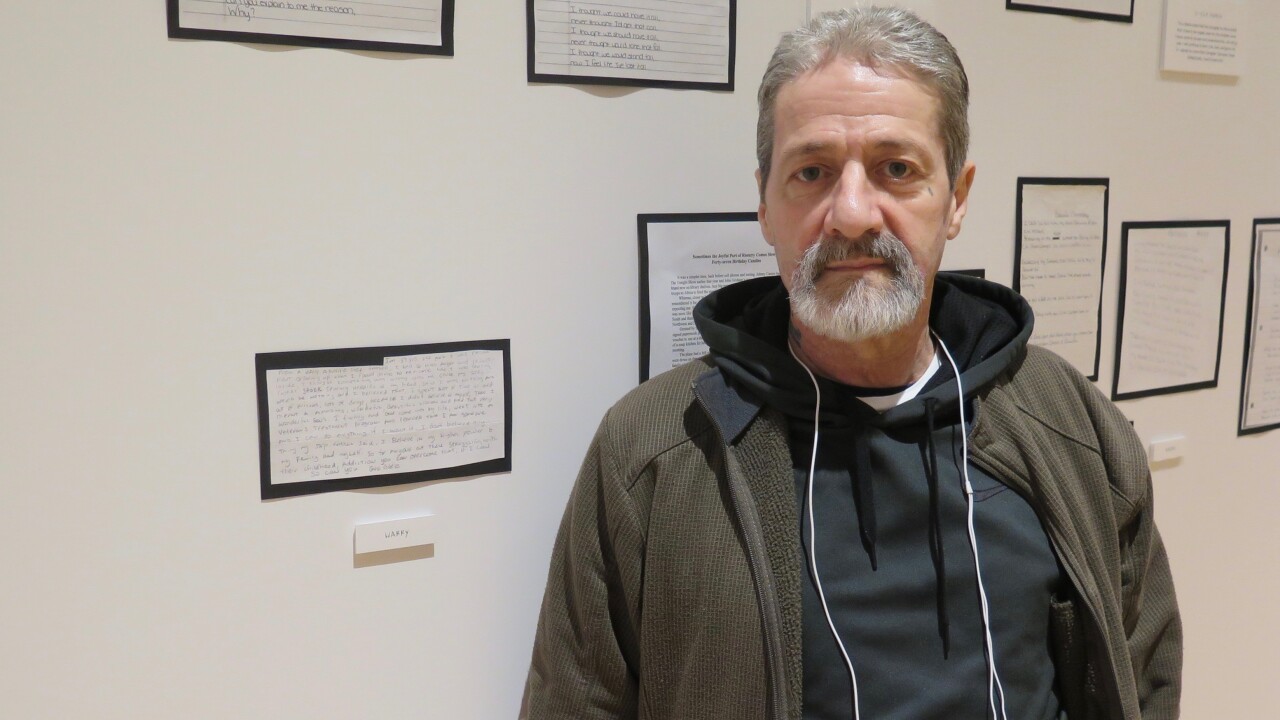 CINCINNATI — The abuse began more than 50 years ago.

Harry Kavadas will always remember being that frightened 8-year-old doing his math homework. And what his stepfather did when the answers weren’t right.

That’s when his stepfather would stick sewing needles in his head, Kavadas said, and it happened for years.

Kavadas wrote about his abuse and how it shaped his life as part of a writing workshop when he was incarcerated in the Hamilton County Justice Center. Now his work is among 40 poems, essays and drawings on display as part of an exhibit called “Unbound.” The exhibit of work by men and women who have experienced incarceration runs through Jan. 31 at The Public Library of Cincinnati and Hamilton County, located at Eighth and Vine streets Downtown.

“Unbound” is the brainchild of Correna Kuhl, a senior library services assistant at the Main Library and the leader of the writing workshop that Kavadas attended while he was locked up.

“I asked for reentry stories sometimes because we don’t talk very much about how difficult reentry is as a process and how many obstacles there are,” Kuhl said. “But also, pieces discuss families, heartbreak, children, regrets, all kinds of stuff. I think the only underlying thing that applies to all of them is they’re all deeply vulnerable.”

In addition to the piece by Kavadas, there’s a poem called “Remember Me?” It starts:

‘Trying as a new person’

There’s also a written work called “Why,” one called “Fate” and another called “Brighter Day.”

An inmate named David from Grant County wrote that his mother beat him as a child, but he didn’t start using drugs until his sister died. The drugs cost him everything, including his business. When his mom died a year later, he wrote, he hit the streets of Cincinnati.

“It has taken my life to a place I never thought it could go,” he wrote. “So here I am trying as a new person.”

There is hope in a piece written by a man named James, too. He wrote that he was incarcerated because of “faulty thinking and poor choices.” He’s also a recovering addict. “Although it has been rough I truly feel that I’m still gonna make it in life and succeed,” he wrote.

Kuhl began the writing workshops at the Hamilton County Justice Center last spring, a few months after she began going there with Keloni Parks, a reference librarian.

Parks started the library’s outreach program in partnership with the Hamilton County Office of Reentry about a year and a half ago, Kuhl said.

“She was maybe just the first of us to think, hey, we should talk to this population, this very marginalized, very underserved population, and I am so grateful to her,” Kuhl said. “She essentially created what has become my favorite part of my job.”

The library is among several community organizations that work with the Hamilton County Office of Reentry to help educate inmates about what’s available for them after their release, Jackson said.

‘A vacation in your mind’

“Having the library be one of those partners that allows our clients to express themselves in a creative way has been very important and very instrumental in showing our clients that they do have talents and that there are other options,” Jackson said.

She hopes that inmates will discover – or rediscover – talents and interests that could lead them away from some of the negative people and influences that could make reentry more complicated.

“I really feel like that opportunity to express yourself in a creative way, it helps with changing thought processes,” Jackson said. “It’s almost like a vacation in your mind to be able to think in another way and maybe reflect on some of the things you’ve learned on your journey so you can do things differently.”

Kavadas looks back at things he could have done differently.

The friends he made on the streets introduced him to drugs, which he said he used to forget what happened to him at home. Those drugs led to other bad decisions and a series of arrests and stints behind bars.

“I’ve been incarcerated a lot,” he said. “I’ve got like eight penitentiary numbers.”

But something changed for Kavadas the last time he was locked up at the Justice Center. He told the story of his childhood abuse for the first time, he said, and decided, “I just don’t want to be that person no more.”

Telling his story made him feel like he was in control of it, Kavadas said.

“I believe that I was able to open up the blinders off my eyes and really think about where my life was going,” he said. “Because if I didn’t do nothing now, I was going to end up dead. That’s the only solution. And you know that’s happening out here too many times here on the streets already. I don’t want to be part of that.”

These days, Kavadas is staying at Joseph House, a shelter for homeless veterans that offers treatment and recovery services.

A path to a safer, more peaceful community

He’s been clean for about six months, he said, and he’s been thinking a lot about how he verbally abused his ex-wife because of the pain he was feeling.

She stayed with him for 28 years, he said, and gave him two sons who have grown into wonderful men.

“I wish I could have been men like them,” he said. “Their mother, she’s an angel.”

Kavadas isn’t sure what’s next for him after Joseph House.

“But I do know this,” he said. “I put God first. I put my clean time and my family. And as long as I know this and do it that way and I stay away from the thing that’s gonna trigger me, that’s gonna hurt me, then I’ll be OK.”

Kavadas said he hopes his writing in the Unbound exhibit can help others who have experienced abuse or addiction.

“They’re not alone, and whatever’s going through in their lives, they can change it. Just share it. Share it with somebody,” he said. “If I can do it, they can do it.”

Kuhl has even bigger hopes for Unbound.

“My first hope is that people come away with a sense of compassion and forgiveness,” she said. “It sounds ridiculous to remind people of this, but these are human beings who make mistakes. And you can tell in their writing often that they are very aware of that. And they want to be heard and they want to be understood as the good people they are.”

But even if people don’t come away with changed hearts, Kuhl said the exhibit has another lesson to teach.

“I hope that people come away understanding that this kind of programming, however they may feel about incarceration or about people who have been incarcerated, this kind of programming is really helpful for successful reentry, which is good for all of us,” she said. “We all want to live in a safer, more loving, more peaceful community. And I think this is part of how we get there.”

“Unbound” continues through Jan. 31 at The Public Library of Cincinnati and Hamilton County’s Main Library location Downtown. Digital copies of the work can be found in the library’s online archive, which will continue to grow as Kuhl adds to it. Details about the exhibit , and the online archive, are available online.