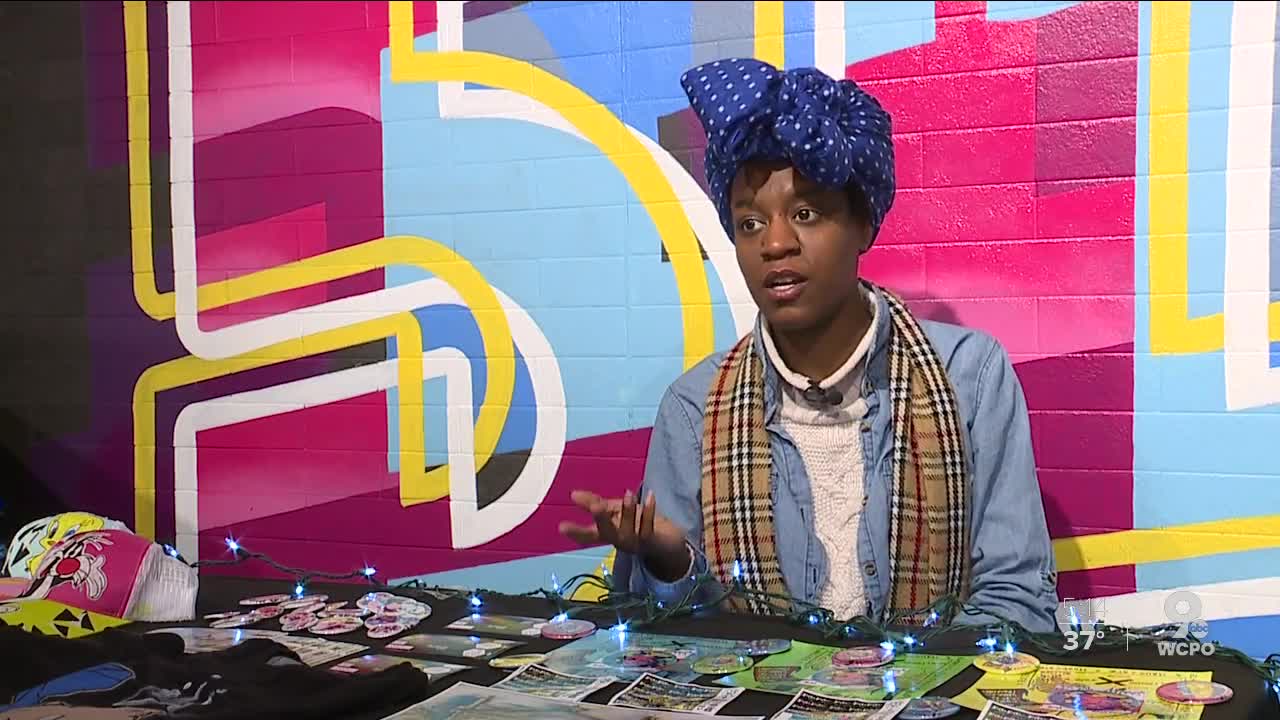 Presius Tajah doesn’t claim to have a bank account brimming with cash or lots of worldly possessions. But she has the drive to make connections and build upon her skills, she said, and people in Cincinnati already have stepped up to lend her support. 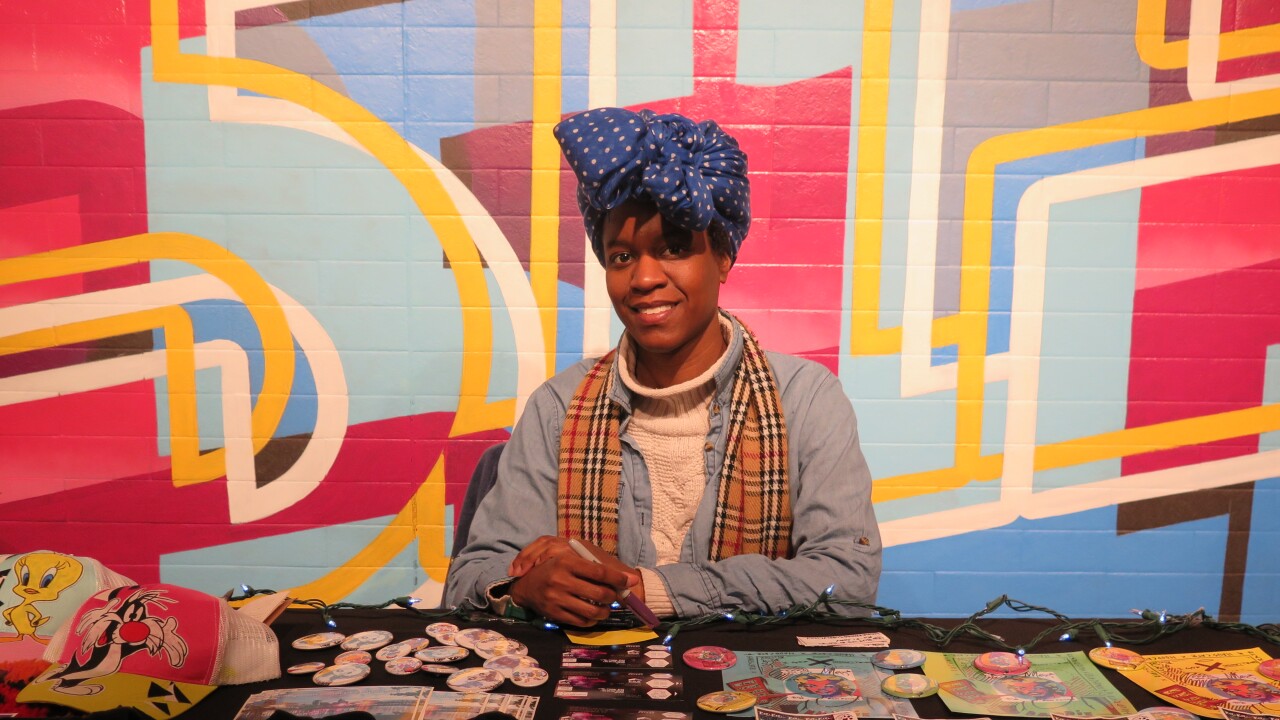 CINCINNATI — Presius Tajah has big dreams and lots of hustle to help make them happen.

She has an art exhibit this month at an Over-the-Rhine real estate office. She just began selling her art and the work of other artists at On the Rhine Eatery, the food hall located at the new Kroger store Downtown. Plus she’s working to launch an effort to teach young people how to become entrepreneurs themselves.

And she’s been doing all of that while struggling with homelessness and housing instability.

“I was OK with riding the wave of my situation because I knew sooner or later I would make it out. But making it out sometimes is a mindset,” she said. “I feel like that millionaire already because I’ve changed my mindset.”

At 29, Tajah doesn’t claim to have a bank account brimming with cash or lots of worldly possessions, but she has the drive to make connections and build upon her skills, she said. People in Cincinnati already have stepped up to lend her support.

ERA Real Estate is hosting Tajah’s February exhibit called “A Passion for My Career” thanks to Chris Sandker, a real estate agent there.

“I know Presius. We go to the same coffee shop,” he said. “She approached me about holding the space open for a pop-up shop for her art, and we love to have the opportunity.”

On the Rhine Eatery is happy to have her there, too, said Nick Poulos, the food hall’s general manager of operations and events.

“She’s very captivating,” Poulos said. “The more I engaged with her and talked, I knew that she was perfect for what we want to do up here.”

Tajah is modeling her business after HoneyMoon Supply, a Los Angeles-based collective that Helene Françoise Philippe started four years ago.

‘Why I strive so hard’

The organization works to mentor creative entrepreneurs and collaborate with shows and other business and artistic projects, she said.

“We first started off as a group of friends making art together,” said Philippe, who was only 16 when she began HoneyMoon Supply. “This kind of allows me to collaborate with people while getting myself out there.”

Tajah was in Los Angeles and met Philippe at a HoneyMoon Supply art show. She was inspired by the concept, she said, especially after she found out Philippe had worked with others to start collectives in Tucson, Arizona, and San Francisco.

“I really fully trusted that she was going to do this project to its fullest, best potential,” Phillipe said.

Tajah’s hardships were part of building that trust.

While Phillipe hasn’t experienced homelessness herself, she said, she and her mother have been very close to that point so she understands Tajah's perspective.

Tajah said her experience with homelessness and housing instability drives her.

“From the time that she has started, she’s met so many people. She’s made so many connections. She’s been showing her work in galleries and cafes,” she said. “She already has the talent. She already has the skills. That’s why I’m rooting for her.”

Being an entrepreneur can be a smart way for many people experiencing homelessness to improve their lives, said Andrew Funk, president of an association called Homeless Entrepreneur based in Barcelona, Spain.

The organization helps homeless people who want to work and be active citizens, he said, and has helped 41 people improve their lives since it began in late 2016. Funk considers 14 of them to be “success stories,” people who now have steady income and can pay for their own housing.

“Anybody that’s homeless needs an entrepreneurial spirit to get out of the situation,” Funk said. “When you focus on what people do well and then you reward them and give them opportunities based on their talents and skills, then you have a much better response.”

Tajah has learned those lessons, too.

‘Always have a skill’

She first experienced homelessness as a college student in Memphis, Tennessee, she said. The private art school that she was attending was trying to charge her for housing that she believed should have already been covered in the financial contract she had signed.

“They put me out on the streets in the middle of the semester,” she said. “I squatted for a semester at my own college just to make sure I got the education that I feel like I deserved for the fact that I was going to be in debt anyways. After that, I just let go and let be and started traveling with whatever money I had.”

Tajah said she “floated” to New York and California many times, but she grew up in Arkansas, and those big cities didn’t appeal to her. She said she likes Cincinnati because she feels like the city is open to her artwork and what she wants to contribute.

“The city gives you opportunities, and that’s why I keep coming back,” she said.

So Tajah has ended up with bad roommates time and time again, she said.

“I just got through being harassed by two male roommates,” she said.

A police officer she met while selling artwork outside of Coffee Emporium on Central Parkway gave her advice on how to get out of the bad situation.

“I had one outfit, and I grabbed all of my supplies, and I just said, you know, 'Let be, and you’ll be taken care of,'” she said.

Now she is selling her art and representing several other street artists as part of an agency she called HoneyMoon Collective Cincinnati. Once the agency side of her business gets stronger, she said, she plans to use fees and revenue generated from that to help pay for the entrepreneurial training for youth.

Tajah said she hopes to inspire others and has lessons to pass along.

“Try your hardest not to panic,” she said. “Then always have a skill. The biggest, most important part is have a skill. If you’re out there with nothing, then you’re going to get nothing.”

Tajah knows what it’s like to suddenly become homeless, she said, and she knows how frightening it can be. But she said there are people and resources to help, and everyone has skills and strengths they can use to help themselves.

“And don’t worry,” she said. “As soon as you start worrying and flailing your arms, you sink.”

Poulos said Tajah is welcome to bring her ambitions into On the Rhine Eatery as much as she wants.

“The Kroger corporate building is a block away from this food hall,” he said. “It’s just a matter of being at the right place at the right time and somebody seeing your product and saying, ‘Oh wow, that might be something that we could sell in our stores.’”

HoneyMoon Collective Cincinnati’s February exhibit called “A Passion for My Career” runs from noon 7 p.m. on weekends and from noon to 9 p.m. on Friday, Feb. 28, at ERA Real Estate, 1333 Walnut St., Cincinnati, Ohio.