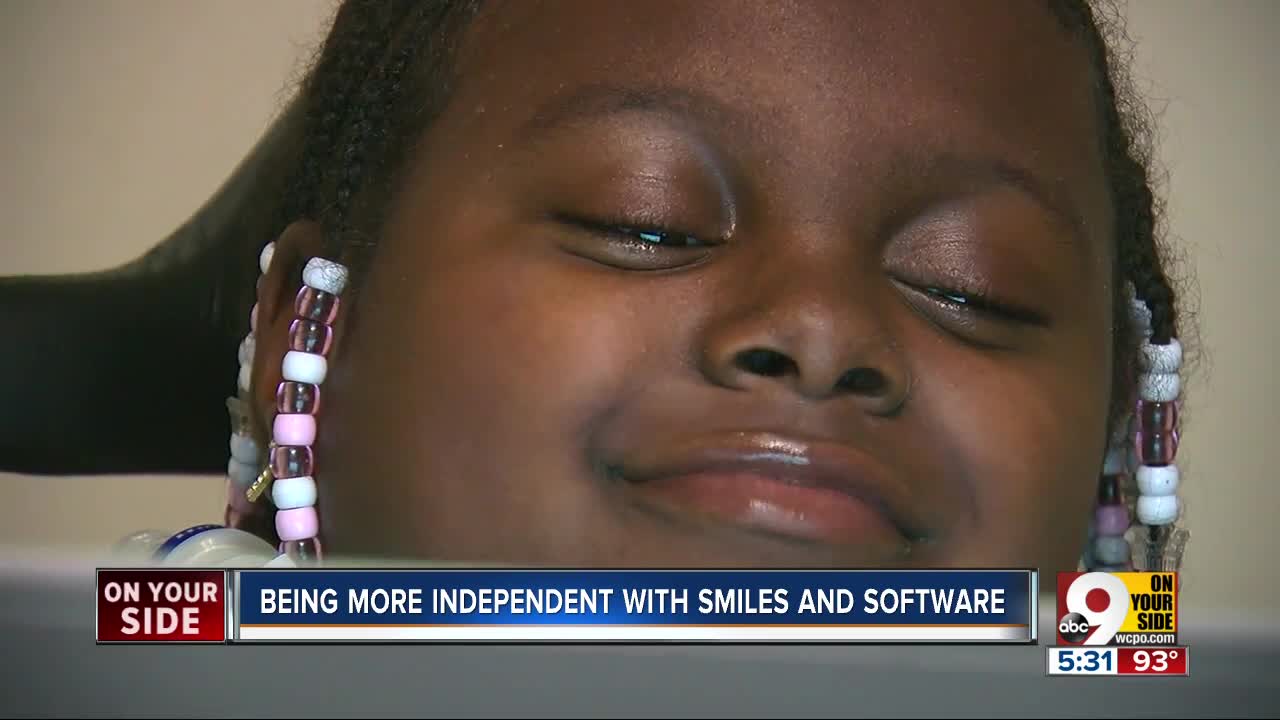 Smyle Mouse software allows Microsoft computer users to click, scroll or drag by using their facial muscles as they smile into a webcam. 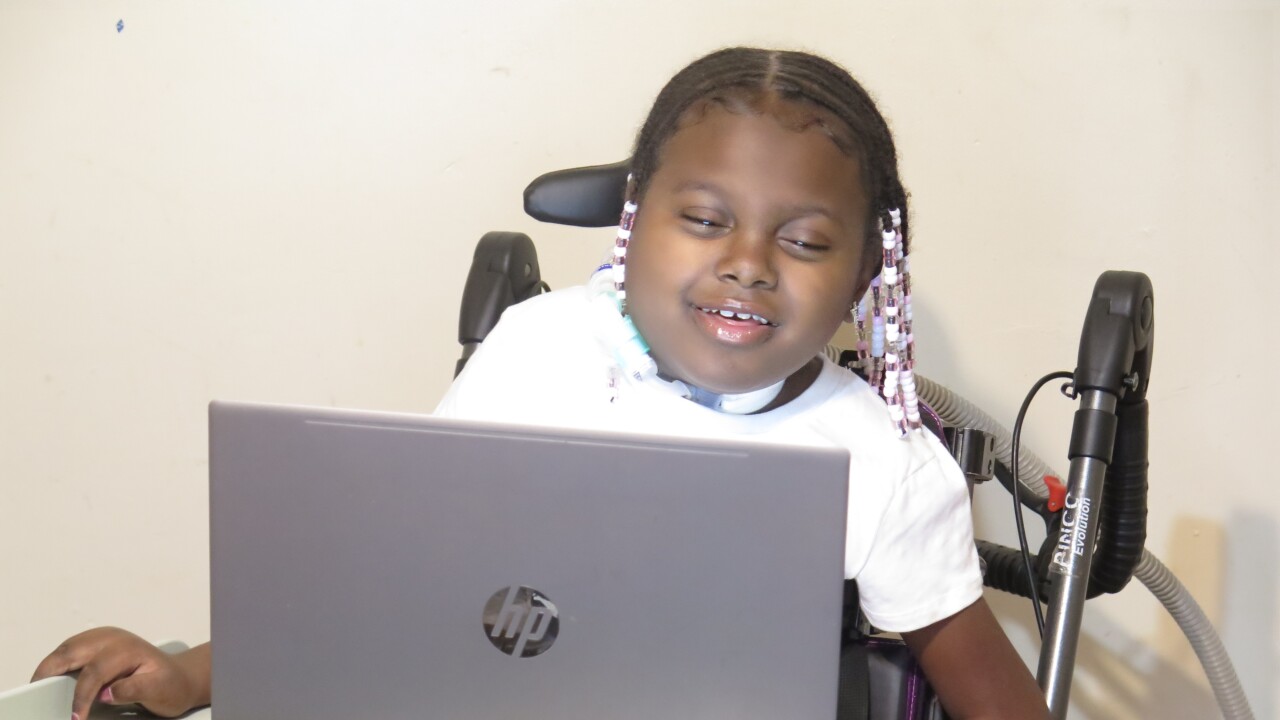 CINCINNATI — Kennedy Ross smiles a whole lot when she has a computer in front of her.

It’s not only because the 8-year-old is happy.

“It’s very helpful,” said Kennedy, who’s in second grade. “It helps me with my school work and homework. And it makes me smarter and smarter.”

The software allows Microsoft computer users to click, scroll or drag by using their facial muscles as they smile into a webcam, said Uday Parshionikar, founder and CEO of Cincinnati-based Perceptive Devices LLC, the creator of Smyle Mouse.

Perceptive Devices has been marketing the software to people who can’t use their hands to control a standard computer mouse. The company has thousands of customers now, Parshionikar said, but he thinks the potential market for the software is much larger.

“The potential is really huge,” he said.

The Christopher & Dana Reeve Foundation estimates there are approximately 5.4 million people living with paralysis across the United States. Not only that, as many as 10 million people in the U.S. have carpal tunnel syndrome, Parshionikar said, adding that research also indicates that 40 percent of U.S. adults will have arthritis in their hands by the time they are 85 years old.

“If you start adding these numbers up, it’s tens of millions. And that’s just the United States,” he said. “So there’s a huge opportunity to helping many, many people.”

Smyle Mouse already has made a big difference in Kennedy’s life, said her mom, Kiara Whitmire.

There are other benefits, too, she said.

Before she became more independent with Smyle Mouse, Kennedy was “on the sidelines,” her mom said.

She couldn’t always do everything her friends could because Kennedy is quadriplegic.

“Seven days before her third birthday, we were in a tragic car accident that led to her being quadriplegic,” Whitmire said. “It was basically starting over with life. I had to teach her everything over and teaching her a new way of life. I never understood how hard it actually is until I lived that life.”

Having to wait for someone to write down her answers in school just added to Kennedy’s frustration, her mom said.

“Without Smyle Mouse she was more conservative. She didn’t really want to do much or she would get frustrated a lot,” Whitmire said. “But with Smyle Mouse, I see that she has a lot more confidence.”

During a recent visit, Whitmire started to reach over to silence the computer that Kennedy was using. But Kennedy quickly shooed her away, saying, “I got it!”

“I’m so used to doing things for her, but Smyle Mouse has actually allowed her to do things more independently on her own,” Whitmire said. “She will do all her work herself, and she will get the job done with Smyle Mouse.”

Whitmire said she sees big things ahead for her daughter, who tends to be upbeat and smiling even when she’s not using her facial expressions to control a computer.

“She wants to be a doctor when she gets older,” Whitmire said. “She’s very, very confident, everything that she does. She’s very smart. I just see a big future for her.”

Parshionikar sees a big future for Smyle Mouse, too. The technology is focused on Microsoft computers for now because Parshionikar spent decades helping to develop software for PCs before he launched his own business. He plans to expand to other platforms, too, he said.

The small, family-owned Perceptive Devices already has five patents on its technology with others in the pipeline, he said.
The technology’s potential is expanding all the time, Parshionikar added.

When his son came up with the kernel of this idea nine years ago for a science fair project, there was not much talk of augmented reality or virtual reality, he said. But now that those technologies seem within reach, he thinks Perceptive Devices’ patents and know-how could apply there, too.

Facial expressions and head movements could be a way to control virtual reality and augmented reality devices, he said, adding, “that way you don’t have to carry any additional gadget with you when you’re interacting.”

There have been a few other small technology companies dabbling in the same realm where Perceptive Devices operates, Parshionikar said. But now giant companies, such as Apple, are getting into the business, too.

He acknowledged that could be either “bad news or good news” for his company.

“There’s a lot of thinking we have done in our family-owned business. Though we are really tiny, we have five patents already,” he said. “So we have a lot to offer even to large companies.”

Plus Parshionikar envisions other uses for his technology, such as a surgeon using “smart glasses” controlled by head movements and facial expressions to operate on a patient or a technician using a similar device to look through a manual while using both hands to fix an air conditioner or car.

Those uses show how Smyle Mouse could help everyone, not only people with physical disabilities, he said.

For now, Parshionikar is working to grow his business with the help of HCDC, Inc., where Perceptive Devices is an incubator client.

HCDC offers him space to work when he needs it along with coaching and a community of other entrepreneurs to provide support, said Theresa Sedlack, the HCDC Business Center director.

“The journey of a startup is often characterized as a race, but Cincinnati entrepreneur and investor, Mark Dawes, is working on founder thought models to help them understand the journey as a quest,” Sedlack said in an email to WCPO. “I think that better characterizes the work of a startup, particularly in its early stages, and HCDC works to provide supportive navigational resources to entrepreneurs on that quest.”

For now Parshionikar is working to get the word out about Smyle Mouse to pave the way for expansion and reach more people like Kennedy and her mom.

The software has been so helpful to them that Whitmire has gone back to school to become a respirational therapist.

“Smyle Mouse has allowed me to take a little rest where I don’t have to get up every five minutes to turn the channel or do something for her because she’s doing it for herself,” Whitmire said. “I definitely appreciate that.”

To demonstrate, Kennedy sat in a room of her Clifton home on a recent afternoon, playing a math game over and over until she achieved a score of “perfect.”

“Yay!” she said with a big smile that she didn’t even use to click on anything. “I’m getting there.”

More information about Smyle Mouse is available online. Perceptive Devices offers a free, 14-day trial of the software to anyone interested in trying it.