Six years after lightning strike, Ethan Kadish's family and friends celebrate him and his happiness

'We are past hitting bottom, and we're moving up' 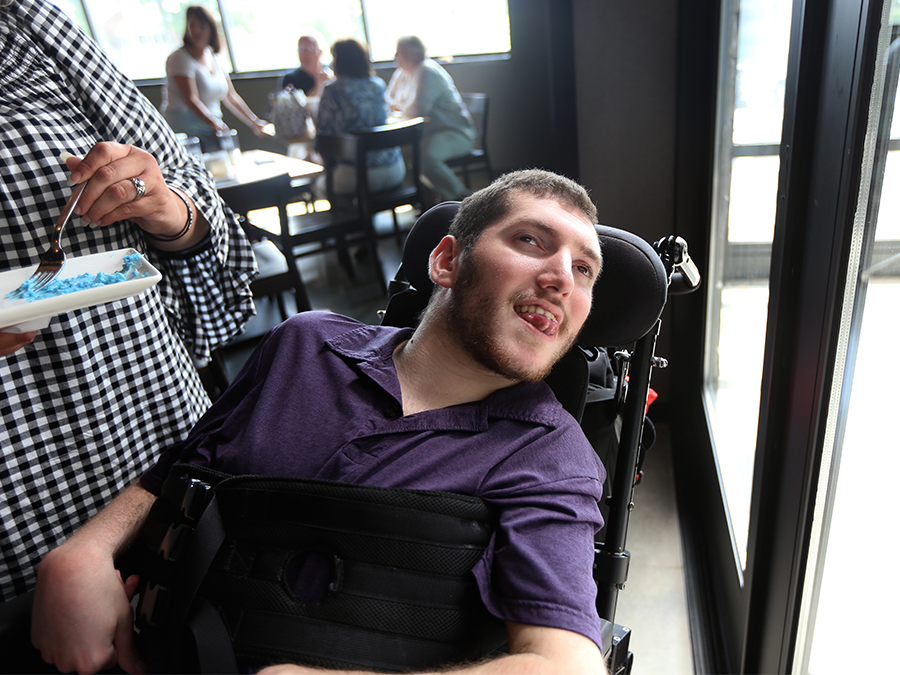 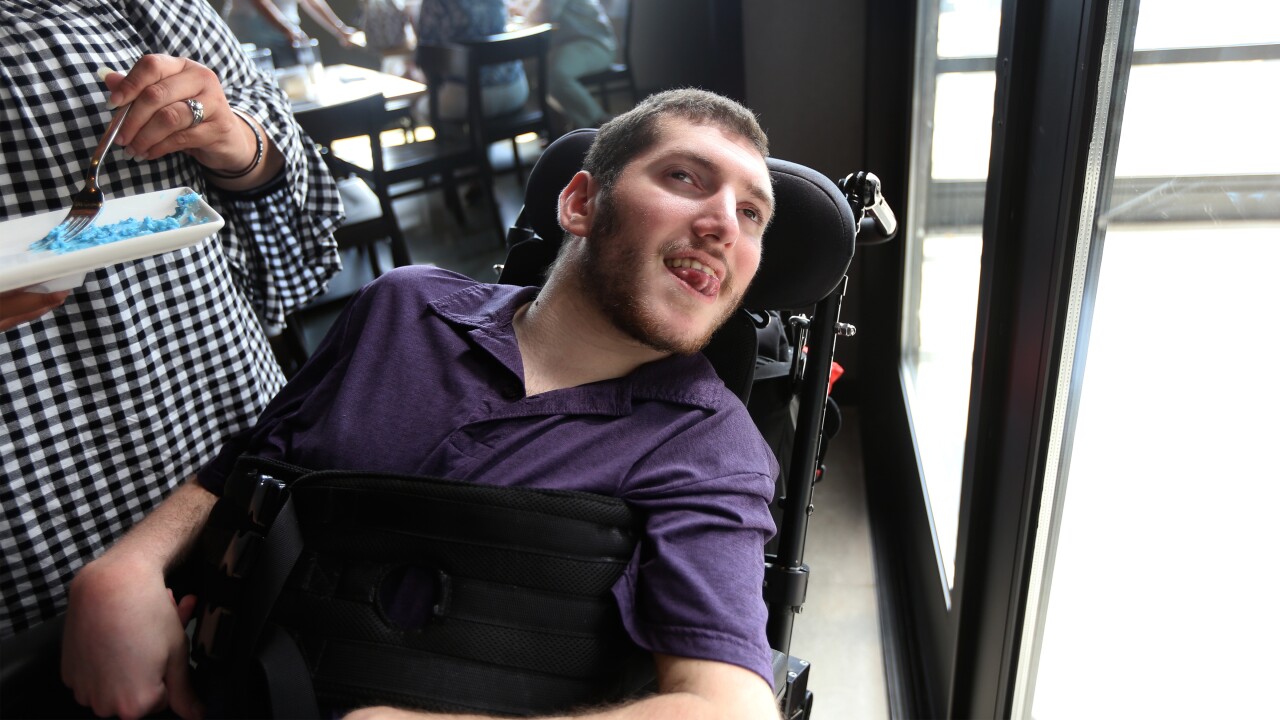 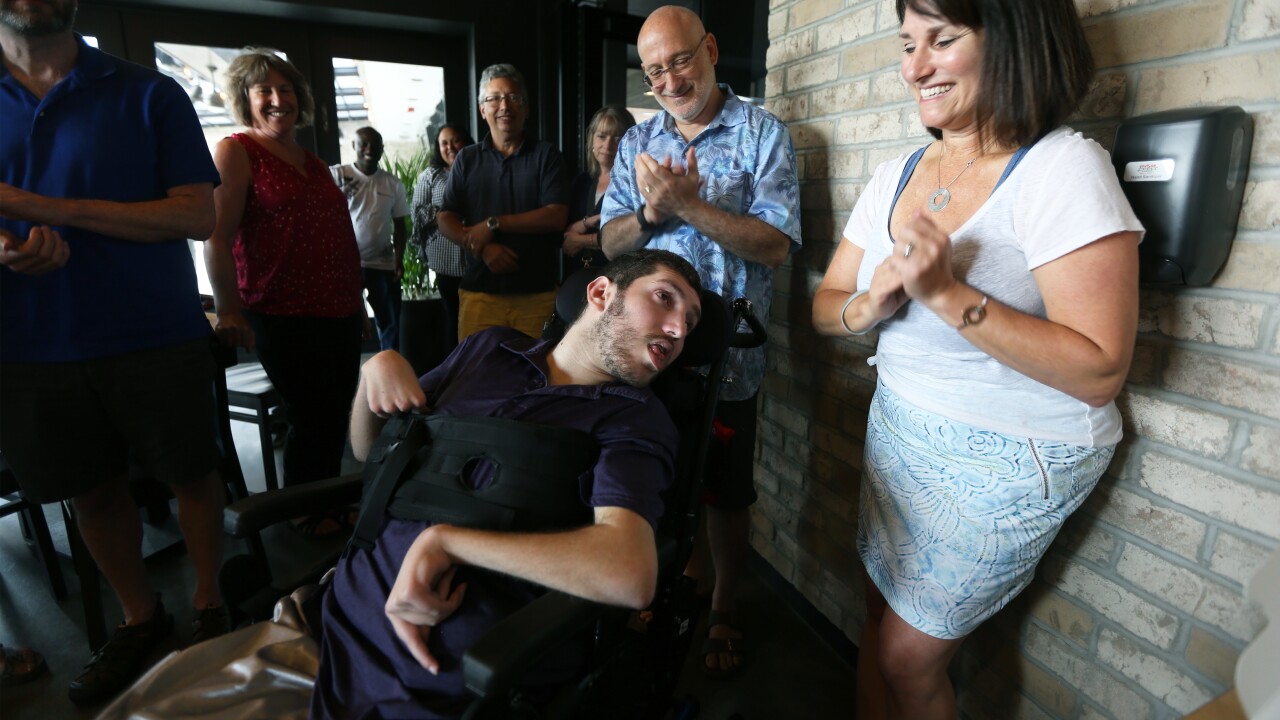 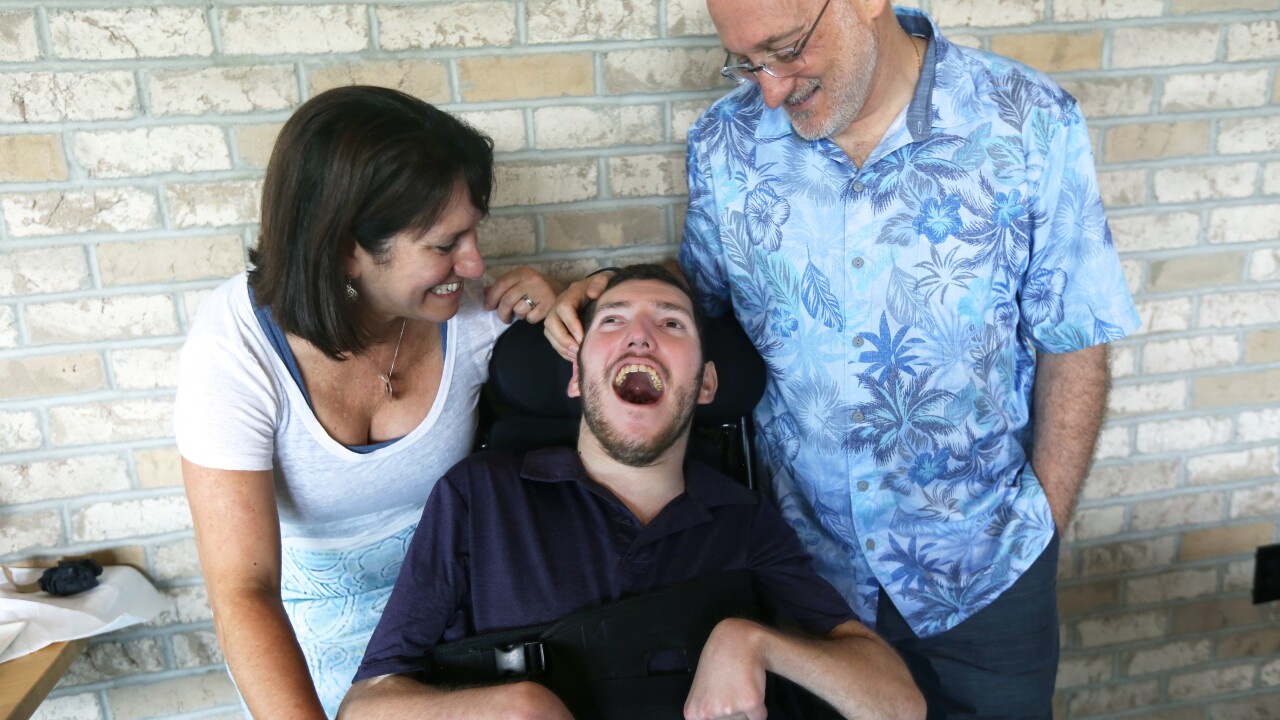 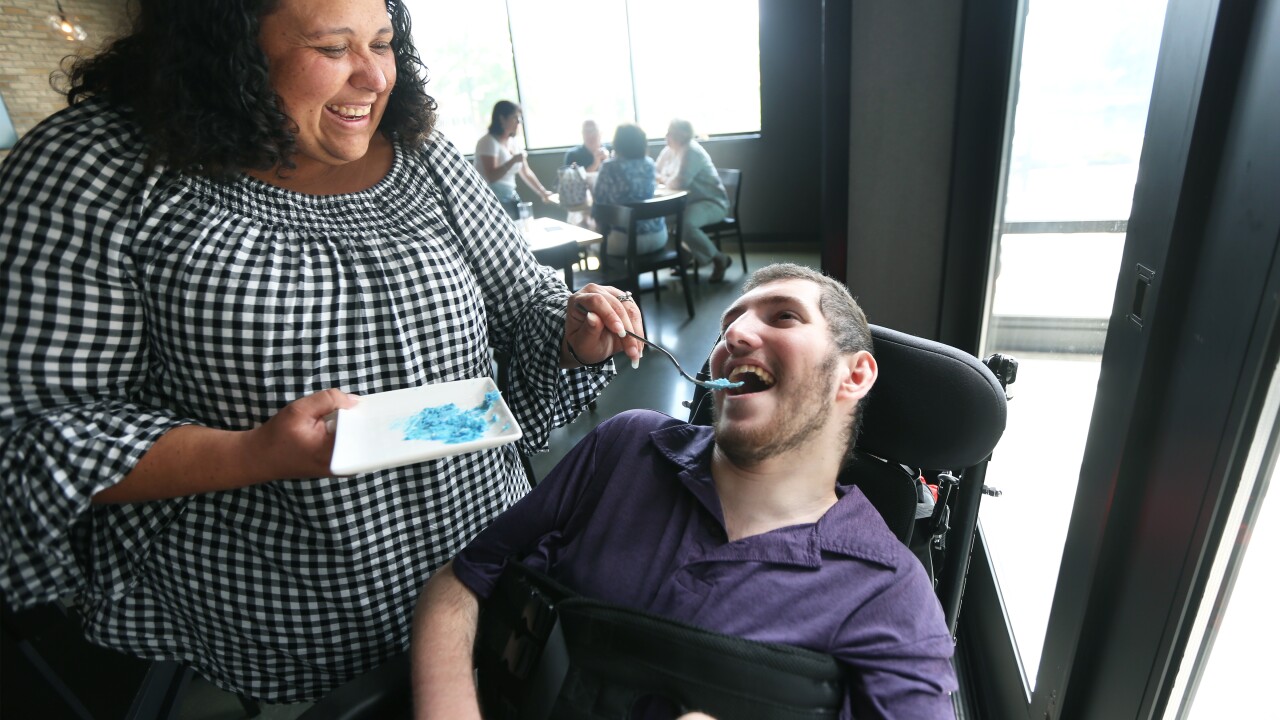 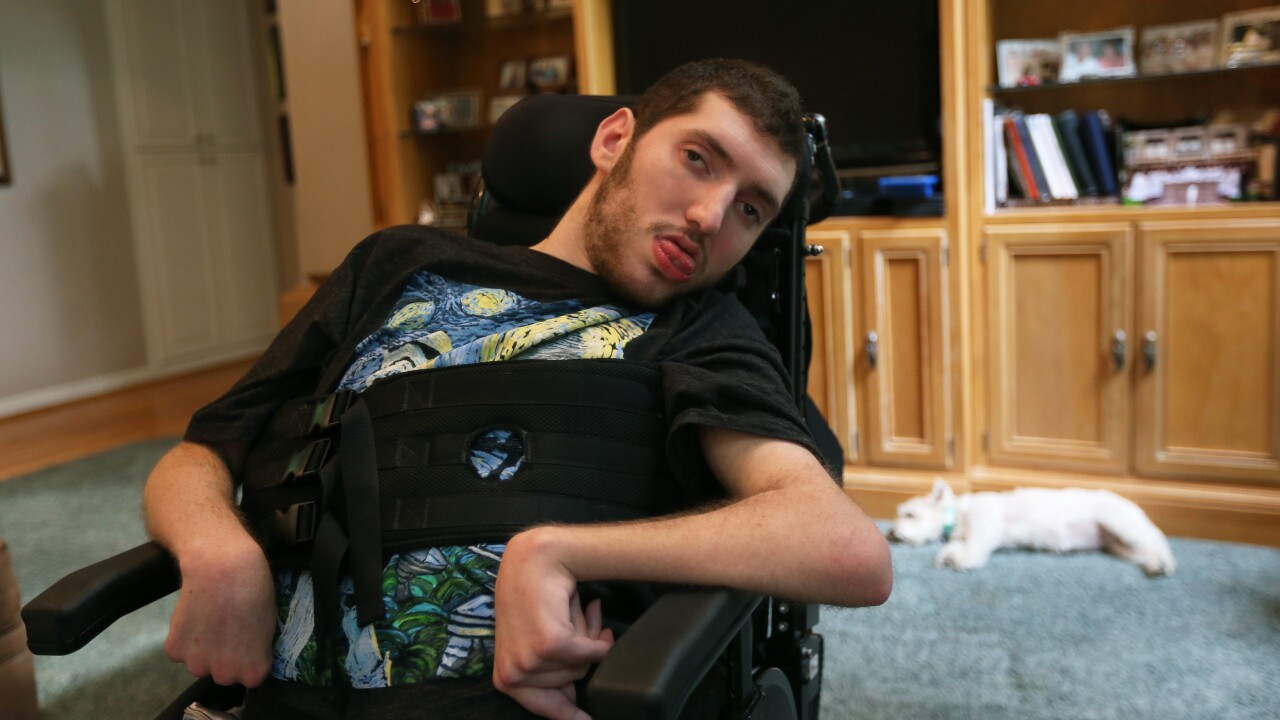 BLUE ASH, Ohio — Hours before the doors opened to the public at Envision Cinemas in Blue Ash, it was party time for Ethan Kadish.

The Loveland teen’s parents rented a theater for a morning screening of “The Lion King” last Sunday to celebrate Ethan’s 19th birthday with several dozen friends.

Ethan smiled wide as the soundtrack played and the movie screen glowed with the film’s opening scene. His mom watched him, wiping tears from her eyes.

“It was time for a celebration,” Alexia Kadish said after the movie. “We are past hitting bottom, and we’re moving up.”

It’s been more than six years since a lightning strike nearly killed Ethan while he was at a summer camp near Indianapolis. Now he uses a wheelchair. He hasn’t been able to walk or talk since June 29, 2013, when the lightning stopped his heart and robbed his brain of oxygen.

Early on, Ethan’s mother and his father, Scott Kadish, hoped for a full recovery -- or something close to it. As time has passed, their expectations have changed.

Now the Kadishes focus on keeping Ethan as comfortable and healthy as possible. It has been more than two years since his last hospitalization, which has allowed him to make his own kind of progress, they said.

He reacts to conversations more than ever with laughter and happy vocalizations. His vision is tracking better, too, and Ethan has more stamina to go bowling or to the grocery store or the movies with the nurse who cares for him throughout the week.

“You can tell that he’s enjoying getting out and kind of interacting with the environment. It’s exciting to see,” Scott Kadish said in an interview a few days before the celebration.

“It’s also hard to accept after six years that this is kind of the path that he is on. I think six years ago we had visions of a different path than today,” he added. “But the fact that he’s relatively pain free, that he has a routine that seems to bring him happiness, we’ve come to accept that in a way that it makes us happy.”

The movie was a way to share that happiness with some of the many people who have helped the Kadish family in the more than six years since Ethan’s injury.

Hundreds of people from Loveland, where the Kadishes live, and from Rockdale Temple, where the family worships, have surrounded them with love and support as part of a group called Team Ethan. Many others from around the world have contributed to the fund that helps pay for the hundreds of thousands of dollars of ongoing medical care for Ethan that isn’t covered by insurance.

After six years of grieving for what could have been, Ethan’s birthday party gave his friends and parents an opportunity to celebrate what they have.

The Kadishes called it his “platinum” or “triple play” birthday because Ethan turned 19 on July 19, 2019.

Friends Ethan’s age gathered around him for selfies, and older adults at the party follow suit. They watched the movie and laughed together and then sang happy birthday – both in English and Hebrew – in a party room after the movie was finished.

“I was so thrilled with this,” Alexia Kadish said. “This birthday kind of leant itself to doing something pretty big.”

For Stephanie Johnstone, the nurse who cares for Ethan during weekdays, “The Lion King” was the latest movie of the summer.

She has taken Ethan to see “Godzilla,” “Rocketman,” “Yesterday” and “Toy Story 4,” which they saw to celebrate Johnstone’s birthday.

Johnstone ran through the list next to Ethan while the other guests had cake.

Caleb Hagan, another of Ethan’s favorite nurses, was at the party, too, along with Bruce Weil, a vision specialist who works with Ethan at Bobbie B. Fairfax School.

The three joked with Ethan. He smiled and groaned happily as they talked about how tall he has gotten and how Ethan could grow a better beard than his older brother, Zakary.

Johnstone scooped a lump of cake and frosting onto a plate and smashed into a sweet, blue paste for Ethan to try. The doctors call them “pleasure tastes.” Ethan still gets the nutrition he needs from a feeding tube in his abdomen, but he seems to enjoy small tastes of other food on his lips and tongue.

Hagan talked about the progress all of them have seen as Johnstone smeared the sweet, blue paste on Ethan’s tongue.

“His tolerance to heat,” Hagan said. “And see how long this movie was? He enjoyed it throughout.”

After a few tries with the smashed cake and icing, Ethan finally smiled his approval.

“You’re such a goofball,” Johnstone said to him. “You want some more?”

The fact that Ethan hasn’t been hospitalized for more than two years has given his whole family a greater sense of stability.

Alexia Kadish returned to teaching at Rockwern Academy last school year and will go back when school resumes.

Alexia and Scott Kadish took Ethan’s older brother and younger sister, Zakary and Elyse, on a trip to celebrate Zakary’s graduation from college and acceptance to law school.

And Elyse got her own trip to Israel this summer before she starts her junior year in high school.

“It’s meant a little more predictability in our movements throughout the days, the weeks, the months,” Alexia Kadish said. “The longer we spend out of the hospital, the less we look back at that time.”

Ethan’s progress also has given his parents the confidence to start thinking more about experiences he would enjoy.

Going to the movies is always a big hit, and Alexia Kadish said she wants to find more opportunities for “sensory friendly” showings where Ethan’s vocalizations are less likely to disturb others.

She also wants to get Ethan to Perfect North Slopes for adaptive skiing, she said, because he loved to ski so much before he got hurt.

“I can’t even imagine what that might be like and the joy that it could possibly bring to Ethan,” she said. “It’s nice just to direct our attention on something for fun.”

It’s not the kind of fun Ethan’s parents envisioned for him before his injury, and Scott Kadish said it hasn’t been easy to get to this place.

But Ethan’s parents understand that he sees the world differently than they do and finds happiness in different ways, too.

“Ethan’s uniqueness brings a number of different challenges that we’ve been able to overcome in the last six years, and I think there will be lots of challenges in the future,” Scott Kadish added. “Some that we know and some that we don’t know.”

They got a break from that uncertain future for a few hours at Ethan’s party, laughing alongside their scruffy-faced son.

It wasn’t exactly like the old days, before Ethan got hurt. But it made these new days feel brighter.

To help fund the hundreds of thousands of dollars of ongoing medical care for Ethan that isn’t covered by insurance, go to http://www.jointeamethan.org.

WCPO reporter Lucy May and WCPO photojournalist Emily Maxwell have been following the progress of Ethan Kadish as he continues to recover from being struck by lightning on June 29, 2013.

This is their ninth installment.