Resilence Project: How a local program is helping kids and young adults heal from trauma

'Oh my gosh, somebody finally gets it' 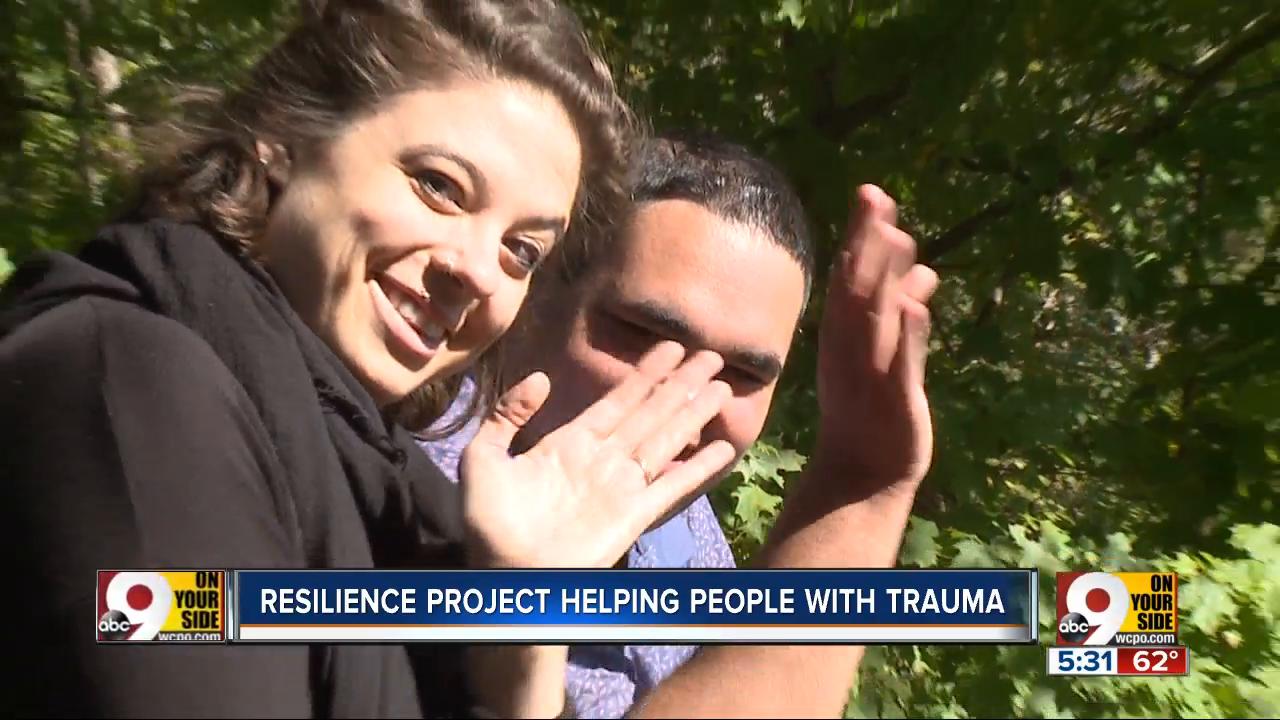 The Resilience Project works with people between the ages of eight and 24 who have developmental disabilities and mental health problems.

BATAVIA, Ohio — When John Hicks and Maggie Center get together each week, they sometimes chat over coffee, hang out at East Fork Lake or play a game of basketball.

It’s the kind of stuff any pair of friends would do.

But Hicks and Center aren’t just friends. Center is a resilience care manager for Greater Cincinnati Behavioral Health Services, and Hicks is one of the 13 clients she sees each week as part of the agency’s Resilience Project.

The program works with people between the ages of eight and 24 who have developmental disabilities and mental health problems to help them build resiliency.

The program has been so successful that Ohio Gov. Mike DeWine and the Ohio Children’s Hospital Association featured it in their Building Resiliency: A Pediatric Mental Health Summit in Dayton this past September.

DeWine explained the need for the summit in a statement saying that, between this spring’s tornadoes followed by the mass shooting in Dayton’s Oregon District, children in the Miami Valley are dealing with more trauma than ever before.

“The tragedies are compounded by struggles they, and children across Ohio, are already dealing with in their everyday lives,” DeWine said. “We know that children who face this type of turmoil have increased risk of depression and other mental illness, poor health and decreased life expectancy. Fortunately, there are proven ways to help.”

“He has more self confidence. He has come a long way,” she said. “She just brings out the best in him.”

‘Somebody finally gets it’

John Hicks didn’t have the easiest start in life.

He was two and a half years old when Angela Hicks and her late husband adopted him from an orphanage in Bulgaria.

“It was a very strange, unusual, shocking kind of experience,” Angela Hicks said. “None of the kids were cared for. There was a stench that you couldn’t believe.”

The couple didn’t get a lot of information about their new son, she said. They were told his biological mother had problems with drugs and alcohol, and it was implied that children at the orphanage had endured a lot of abuse.

“He actually was 21 inches and 19 pounds at two and a half years old,” she said.

Now 23, John Hicks has had trouble controlling his anger for years. But when his father became sick, his behavior got worse.

And when his father died from pancreatic cancer about two years ago, Hicks didn’t know how to express how he felt about the loss, his mother said.

That’s when a counselor suggested the Resilience Project.

“Going into it, I just sort of rolled my eyes and thought, ‘Oh my gosh. They’re going to put me in another program. What are they going to do at this point in his life?’” Angela Hicks said. “We’ve been through so many different programs.”

Then staff members helped her and her son create a trauma-informed biographical timeline. Greater Cincinnati Behavioral Health does that with all participants in the Resilience Project. The timeline is designed to identify everything that has been positive in their lives in addition to the trauma they have experienced, Crew said.

That helps resilience care managers like Center understand each person’s strengths and what can help them build resiliency.

That approach made a huge difference for Hicks, his mom said.

After years of feeling like a bad parent or like her son must be in the wrong school, Angela Hicks said she finally got an explanation for her son’s behavior that was based in neuroscience.

“It was, ‘Oh my gosh, somebody finally gets it.’ They got it,” she said. “I was so relieved and amazed that the people involved knew exactly what I was talking about and where I was coming from.”

Building that resiliency can help the young people build new neural networks in their brains and help them heal from the trauma they experienced, Crew said.

The goal is to build what the project calls “resilience factors,” which include creating positive connections with safe adults, a sense of belonging and improved self-esteem.

That begins with the resilience care manager forging a safe relationship with each participant, like the friendship that Center has built with Hicks.

To do that, Center said, they began talking about things they both care about.

“John really likes club music,” Center said, smiling. “He showed me a lot of really exciting music I had never heard before.”

“Yeah,” Hicks said with a laugh.

“So we’ve shared things that we’re passionate about,” Center said.

“We both love basketball,” Center said. “We’ve played basketball together a few times.”

“I beat you,” Hicks said with a big smile.

“He’s way better than I am,” Center said as Hicks laughed. “He’s got an advantage. He’s got a basketball hoop at his house.”

They chat easily like the friends they have become. And now that Center has built that friendship with Hicks, the two of them go into the community and complete volunteer activities that interest Hicks so he can form new friendships with other people and contribute to the community, Center said.

“We build the relationship in a really safe way, and then we practice it by building those other relationships,” Center said. “So what we do ends up mirroring new and safe relationships. So it kind of becomes a new template.”

Center also has taught Hicks how to describe his emotions using colors that create a picture of what his feelings look like.

“Some of the neuroscience behind it is we can communicate with all the parts of the brain with colors and pictures way easier than we can with language,” Center said. “So instead of just being something that we have to name, we can create a picture of what that feeling is.”

That has been a big help to Angela Hicks.

“One day we were talking, and he got really angry at me,” she said. “And he’s like, ‘I’m feeling red!’ And it was like, oh my gosh – it’s working. He knew how to express how he was feeling.”

Angela Hicks said she has seen her son grow in other ways, too. When good friends had a death in their family recently, she and her son both went to the house to help out. Hicks noticed that their friend’s uncle was having a particularly tough time with the death of his mother.

“He actually sat down and talked to the uncle about his experience of his dad dying and how he can get through this and did it make him angry that his mom died,” Angela Hicks said. “The uncle came to me and said, ‘Oh my gosh -- what Johnny just did for me was amazing.’”

The encounter made Angela Hicks proud and even excited.

“Just knowing that he has that inside of him to be able to do that,” she said.

Hicks said he has noticed a difference, too. He can make friends more easily, he said. And now he has a name for the emotion that fills his body when he feels really safe. He calls it the green feeling, he said.

That’s why it meant so much when Hicks gave a simple, one-word answer to this question: How does it feel to spend time with Center?