Outreach has changed, but message remains the same: The 2020 census is happening, and it's important

'It impacts absolutely everything for everybody' 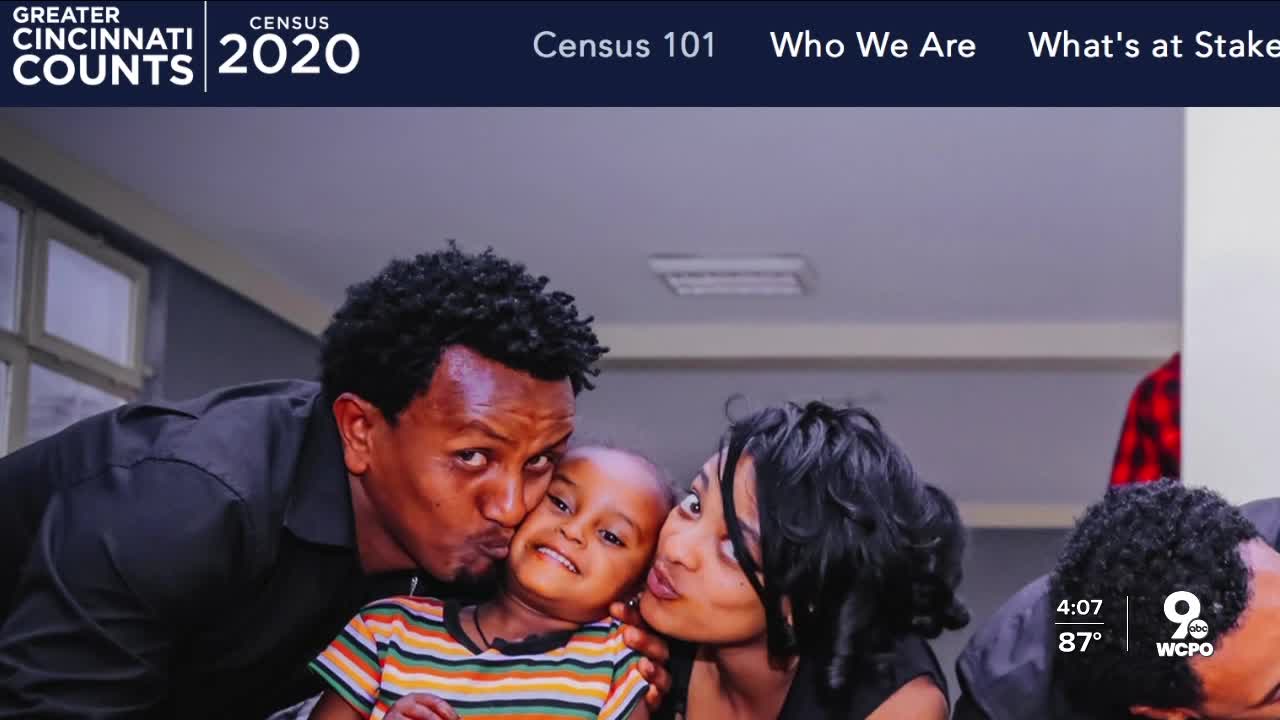 Cincinnati and Hamilton County officials and the roughly 200 partner organizations involved in the Greater Cincinnati Counts committee have renewed their work. The goal: to spread the message that the census is still happening, and it’s important to be counted.

CINCINNATI — Thousands of Tri-State families that rely upon Sweet Cheeks Diaper Bank each month are getting more than a supplemental supply of disposable diapers these days.

“We need to make sure everyone, of every age, counts for the next decade,” the note states below an image of two little footprints. “Complete the Census today at my2020Census.gov or by calling 844-330-2020.”

“We have thousands of bundles going out to families -- and to a lot of really hard-to-reach and hard-to-count families -- and these bundles are full of diapers,” said Megan Fischer, Sweet Cheeks Diaper Bank’s founder and CEO. “It’s something everybody wants and needs. So they’re going to be opened. And if we include something in it, it’s going to be looked at.”

The notes are part of the latest efforts to make sure everyone in the region gets counted in the 2020 census.

Local leaders throughout Cincinnati and Hamilton County started working last October to develop strategies to boost census participation in Cincinnati and Hamilton County. Census results, after all, determine each state’s number of representatives in Congress, help businesses determine where to locate and grow and influence the allocation of more than $675 billion in federal money to states, local governments and families each year.

Then the coronavirus pandemic hit, and plans changed.

It no longer made sense to send flyers home in students’ backpacks, because kids were no longer in school. Big gatherings were out of the question, too. In many ways, the census work took a backseat to the day-to-day uncertainty brought about by COVID-19, said Chandra Yungbluth, assistant to the city manager for the city of Cincinnati.

“We hit a big pause during the pandemic,” Yungbluth said. “Nothing happened as planned in 2020.”

Now Cincinnati and Hamilton County officials and the roughly 200 partner organizations involved in the Greater Cincinnati Counts committee have renewed their work. The goal: to spread the message that the census is still happening, and it’s important to be counted.

The committee soon will launch radio, print and digital advertising and will send mailers and make phone calls to households, too, Yungbluth said.

“We’re getting back into the thing where the general public has more bandwidth to pay attention to other things other than COVID-19,” she said. “So we’re just going to ramp all that up.”

Other efforts include working with partners like Sweet Cheeks Diaper Bank and Freestore Foodbank to distribute census information to their clients and talking with people directly at public pools, parks and locations such as Findlay Market.

Freestore Foodbank has been distributing 10,000 emergency food boxes each week since the early days of the pandemic and included census information in those boxes early on to encourage participation, said Freestore Foodbank CEO Kurt Reiber.

And during the organization’s more recent large-scale food distributions, Freestore Foodbank has invited census teams to attend and help people fill out the census in person, Reiber said.

“There’s a fair amount of trust within these impacted communities of the Freestore Foodbank, so our team tries to encourage them to participate as best they can and complete the census,” he said.

Findlay Market has worked to provide space where the city and U.S. Census Bureau can provide information and explain the importance of filling out the census, said Anthony Berin, Findlay Market’s director of market management.

“We’ll be seeing some of the same kind of work happening from various groups around voter registration and things like that,” he said. “Nothing politically based, but just helping people to understand that these things are important and how they work.”

“There’s a lot of funding that comes to nonprofits that is based off of the census data,” Fischer said. “So if we don’t get everybody counted, then our cities and our counties don’t get the funding that they need to actually serve all the families that need the help.”

Over-the-Rhine Community Housing has been involved in the Greater Cincinnati Counts work in a variety of ways, too.

Before the coronavirus pandemic, people from the local census operation visited the nonprofit organization’s office to offer residents jobs as enumerators for the census, said Over-the-Rhine Community Housing executive director Mary Burke Rivers. Enumerators interview people in households that have not responded to the census online or by mail.

‘Impacts everything for everybody’

Over-the-Rhine Community Housing also has posted signage about the census and will provide access to their buildings so enumerators can do their work, she said.

“And then energy assistance programs, child care programs – all of those things are determined by census information,” she said.

Rivers said there’s another big reason that getting an accurate picture of Over-the-Rhine’s population is important to her.

“For those of us who either live there or have been engaged in Over-the-Rhine for a number of decades to be able to demonstrate with census data what has happened over the past 20 years,” she said.

“I’m sure a lot of good people who invested their time and energy in Over-the-Rhine don’t want to cause harm. But if we did displace people – which I believe, I know, that we did,” Rivers said, “the census data will help us tell that story better so that we can learn from this experience and not repeat it in the West End or Walnut Hills or other neighborhoods.”

Yungbluth said public officials are keeping a close eye on Over-the-Rhine, Downtown and other neighborhoods where they are concerned about low census participation.

Areas around the University of Cincinnati with a lot of off-campus student housing are especially difficult to count this year because so many students went home to their parents during the pandemic, she said.

After all, federal funding will get distributed based on this data. If the 2020 census reflects only 70% of the city and county population, the local governments will get only 70% of the funding they need to serve all the residents who rely on government services, she said.

“People always ask me, ‘What does the census impact?’ It impacts absolutely everything for everybody,” Yungbluth said. “And if you get it done before Aug. 11, nobody will knock on your door.”

More information about the 2020 census and what local leaders are doing to educate the public about it is available online.