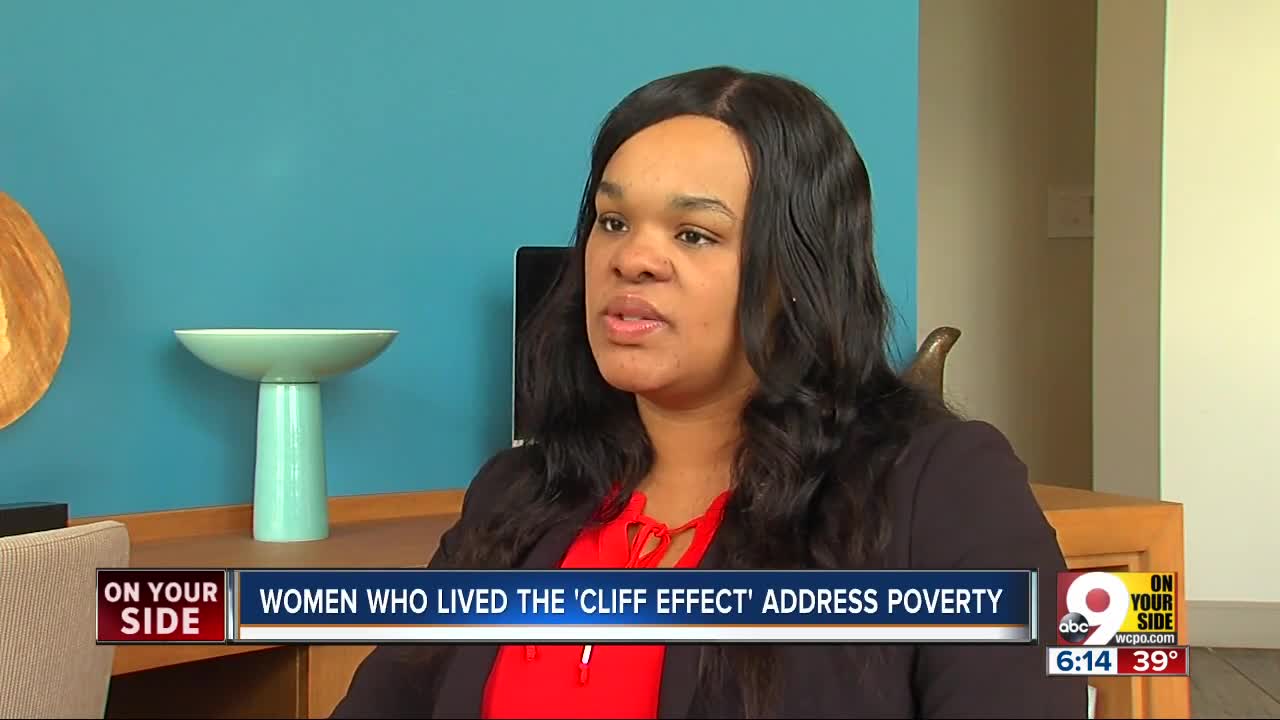 It's called the Cliff Effect: What happens to people living in poverty when they start to make too much money to continue receiving government benefits. Without that help, earning more can actually push them further into poverty. That was Mary Moss' story. She and other women who have lived it want to make things better for people in poverty today. 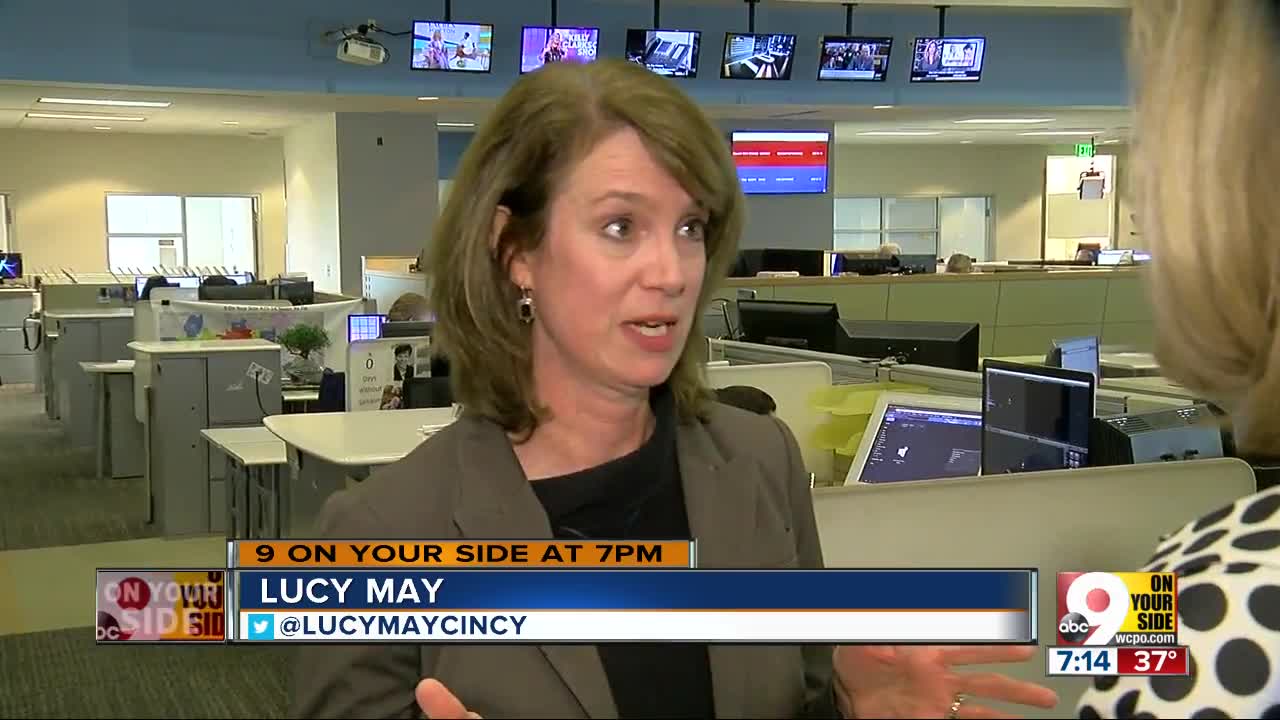 CINCINNATI — Mary Moss remembers the stress like it was yesterday.

She and her daughter were on their own, and she counted on government-funded health care and government vouchers to help pay for child care while she worked to become self-sufficient.

But getting a small raise meant she earned too much to qualify for the assistance, leaving her in a worse position financially than where she started.

That Catch 22 is known as the “cliff effect,” and it’s a problem for parents who are struggling to support their families but feel stuck by policies that withdraw government support as soon as they begin to make a little progress.

Moss last experienced the cliff effect about eight years ago.

These days, she’s working to help solve the problem as a member of a newly created advisory council for the Women’s Fund of the Greater Cincinnati Foundation. There she hopes to bring her important perspective to the work of the Women’s Fund.

“If you’ve never experienced it yourself or if you don’t know anyone in relation to you that has, then you don’t understand,” she said. “You don’t get it.”

The Women’s Fund created the new advisory council for exactly that reason, said Executive Director Meghan Cummings. Already the council has decided which local nonprofit organizations would receive $50,000 in grants from the Women’s Fund and The Greater Cincinnati Foundation.

“We realized that we really needed to center the voice of those women most affected by these issues,” Cummings said. “And not only center the voice and get them at the table but give them decision-making capabilities and power.”

The change marked a huge shift for the Women’s Fund, which formed the advisory council with the help of Cohear, a community engagement company.

“It was incredible to see the Women’s Fund basically transfer power,” said Nia Baucke, Cohear’s director of communications. “And I think it’s important to note that they transferred power in their strategic interest as an organization.”

‘They are living the cliff effect’

The idea to form the advisory council was born out of a series of community conversations that Cohear organized for the Women’s Fund.

The goal was to bring together women who experienced the kinds of problems that the Women’s Fund has been working to solve.

“We got so much information and knowledge from those focus groups that we decided we wanted to do something more long-term with the women,” Cummings said.

The Women’s Fund didn’t know exactly what to expect when it turned over the grant-making decisions to the women on the advisory council, but Cummings said she was thrilled with the results.

“They are living the cliff effect. They are working in jobs we are most concerned about, and they provide so much expertise into our mission, and they really help us shape all of our decisions,” she said. “They were able to add such a deep layer of wisdom and texture to the conversation.”

• Ladies of Leadership, which builds leadership and interpersonal skills for women in poverty, providing child care, professional development and other services.

• Ohio Justice & Policy Center. The grant will help provide free legal assistance to survivors of human trafficking to remove or seal their criminal records so they can get better jobs.

• Samaritan Car Care Clinic, which will use the money to sponsor vehicle repairs for women who can’t afford them.

Cummings noted that the advisory council had a strong focus on entrepreneurship.

“They really want to create wealth in their families. And one way to do that is by supporting entrepreneurship,” she said. “That’s a much longer-term solution than just solving for poverty in a situation.”

Co-op Cincy works with a lot of women who experience the cliff effect, which made it all the more meaningful to receive the grant from the new advisory council, said Ellen Vera, Co-op Cincy’s director of development and co-op organizing.

“It just feels like it validates what we’ve all been working extremely hard for,” Vera said. “It truly is about helping people help themselves.”

The Ohio Justice and Policy Center wants to help women remove the barriers that stand in the way between them and progress, said Deputy Director Sasha Naiman.

The Women’s Fund grant will do that by giving the center resources to help more women who are struggling to become self-sufficient just like women who experience the cliff effect struggle, Naiman said.

“It means so much that OJPC was picked by women who know what services would be most helpful to their situations or the situations that they’ve seen loved ones or members of their community be in,” she said. “Work in the community has to be rooted in and deeply connected to the people who have lived those issues every day.”

For her part, Moss said she wants to continue to use her experience to help other women.

“I’m someone that can give them that knowledge, that can guide them,” she said. “Make their process smoother, easier or my tips and tricks that I know.”

She’s now a property assistant for NAI Hiffman, a commercial real estate firm, and is working to get her real estate license.

She has three children now – her daughter and two younger sons – and is recently divorced. So while she’s back to being a single mom, she co-parents with her ex-husband and has a career that makes it much easier to provide for her family.

Her top three tips for getting where she is:

“Have a great support system for when you need to cry or vent,” she said. “Be willing to take whatever job it is -- because everyone needs money to support their family -- and never be too afraid to ask for help and tell people about your situation.”

With insights like that, Cummings is convinced the Women’s Fund can make a bigger difference than ever in the lives of the people the organization most wants to help.

“When we center that voice of the community to those closest to the pain we are trying to solve for, we get just such better answers and authenticity,” she said. “We know they’re going to make a huge impact.”

More information about the Women’s Fund of The Greater Cincinnati Foundation is available online.