'I hope this starts the conversation' 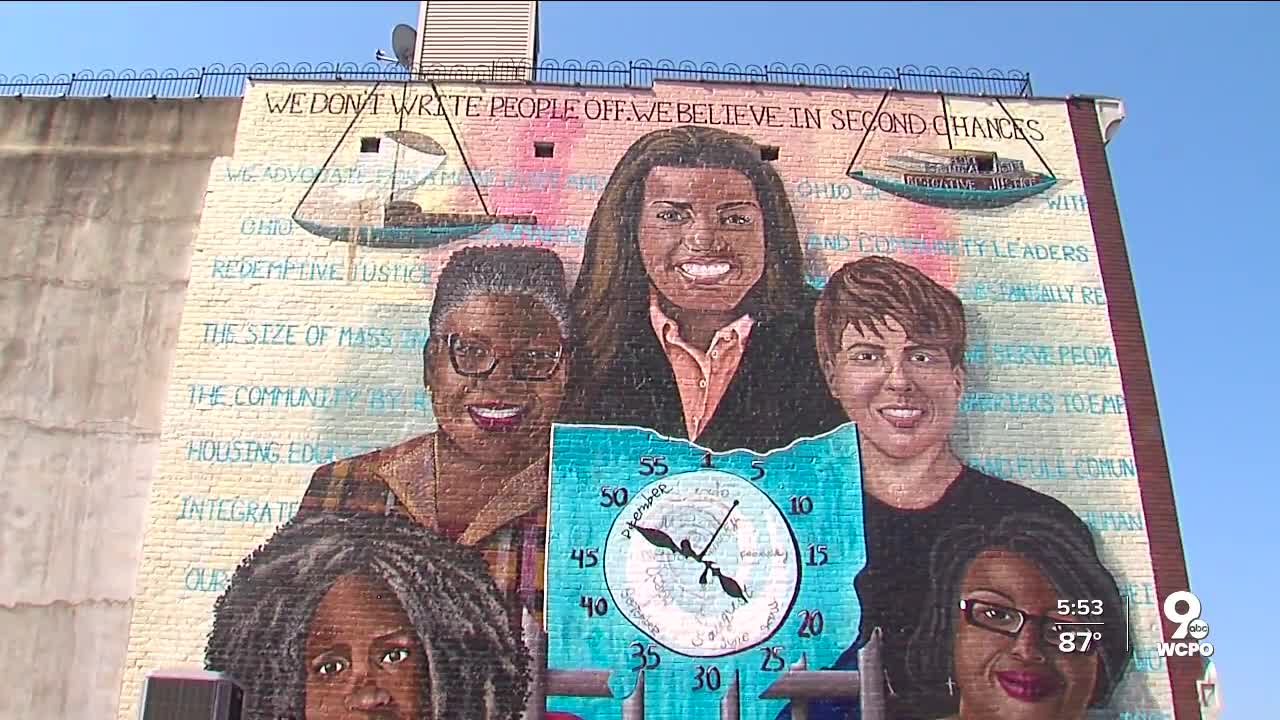 Called “Time Saved vs. Time Served,” the ArtWorks mural features the larger-than-life faces of five smiling women. They float below the scales of justice and surround a clock shaped like the state of Ohio that artistic director Tyra Patterson hopes will catch people’s attention. 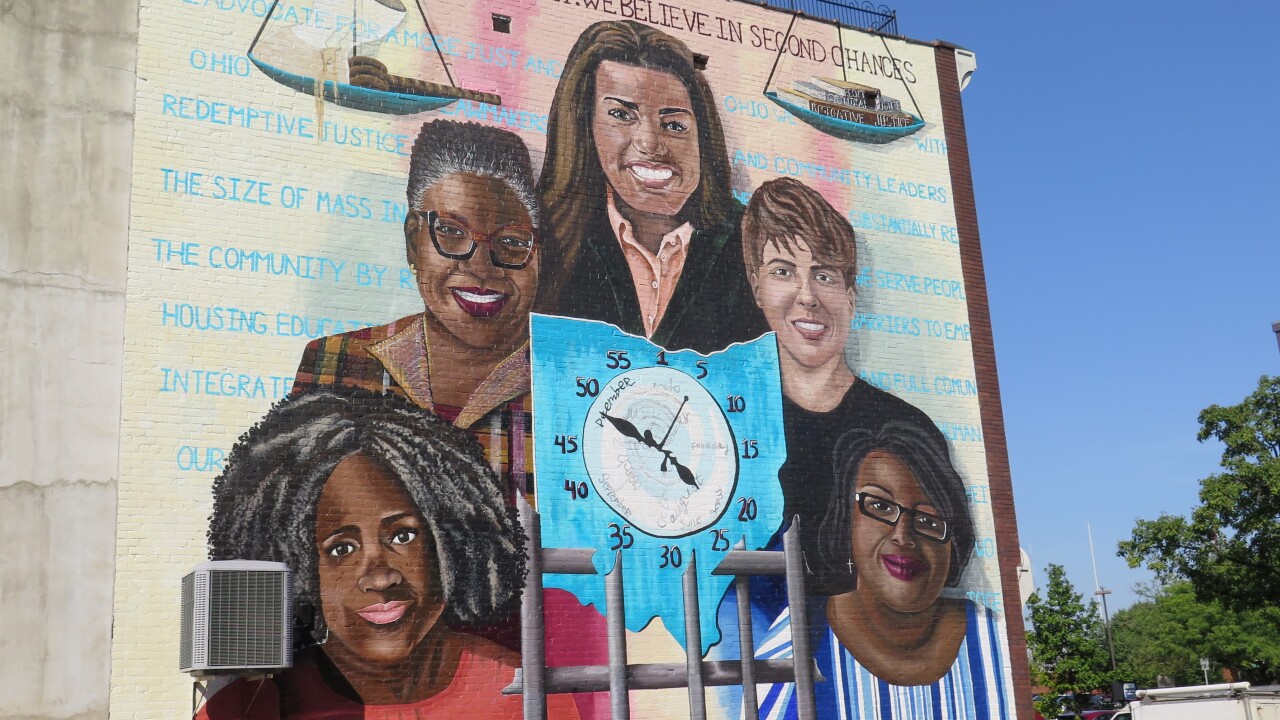 Called “Time Saved vs. Time Served,” it features the larger-than-life faces of five smiling women. They float below the scales of justice and surround a clock shaped like the state of Ohio that artistic director Tyra Patterson hopes will catch people’s attention.

The numbers on the clock – ranging from one to 55 in increments of five -- represent prison sentences, she said, and each woman pictured spent time behind bars.

Patterson spent 23 years incarcerated for murder and robbery – crimes she did not commit – before she left prison a free woman on Christmas Day 2017.

She first conceived of a social justice mural while she was locked up, she said. She approached ArtWorks about her idea two years ago after a fundraiser where she learned about the nonprofit’s mission and work on public murals.

“This is a particular moment in our community where there is a real lens on social justice and the criminal justice system,” said ArtWorks CEO Colleen Houston. “But this mural has been two years in the making. And I think we really believe that art has the ability to elevate the conversation and to deepen the empathy and hopefully to destigmatize issues.”

That’s exactly what Patterson and the other women pictured on the mural hope will happen, too.

“I hope that this starts the conversation about what people are capable of,” said Tracy Brumfield, pictured below and to the right of Patterson in the mural. “And does a mistake define you? And the answer is absolutely not.”

“People can change,” added Sheila Donaldson Johnson, pictured on the lower left in the mural. “The biases and the different prejudices against people who have been in trouble – I hope that it would take away to see some powerful women that are up there that have changed their life.”

‘You can’t write people off’

Patterson said she strategically selected each woman pictured in the mural. All were incarcerated for different reasons, and all now work in jobs that relate to social justice.

Johnson is a senior paralegal at Ohio Justice and Policy Center, where Patterson works as community outreach strategy specialist.

“I went to prison several times, and I was released in 1989,” Johnson said, all for crimes that stemmed from an addiction to narcotics that started at a young age. “Since then, it was rocky at first, and I turned my life around, and I haven’t looked back.”

Johnson said she was honored when Patterson, who is also an ambassador for Represent Justice, asked her to be part of the mural. She said she hopes people who see it feel inspired.

“I hope they would take away you can’t write people off and that you keep some hope and faith that people can change,” Johnson said.

Brumfield said her “real life” didn’t start until she was 48. She spent years struggling with an addiction to opiates and heroin. She went through the Hamilton County Drug Court system, but the cognitive behavioral therapy offered at the time didn’t work for her.

“So I kept failing. And every time you fail, you get thrown back in jail,” said Brumfield, who served six months in prison. “When we talk about crime and punishment, drunk driving is a misdemeanor. But a little bit of a controlled substance is a felony. And that stays with you.”

After she left prison and got clean, Brumfield began volunteering in jail. Her work inspired her to start RISE, for Reenter Into Society Empowered, a newspaper distributed at jails to provide information and hope to people as they leave incarceration.

“The scales (on the mural) represent that justice is supposed to be blind, right, and impartial. But that’s not what we’re seeing,” she said. “We’re seeing judges who have been on the bench way too long, and they talk about us without us. They make funding and policy decisions without people who’ve been there at the table.”

The other two women depicted in the mural are DeAnna Hoskins, pictured just below Patterson on the left, and Belinda Coulter-Harris, shown in the lower portion of the mural to the right of broken bars representing the women's freedom.

Hoskins, now the president and CEO of New York-based JustLeadershipUSA, is from Cincinnati and was the founding director of reentry for Hamilton County. Coulter-Harris is a customer service representative and intake coordinator at Cincinnati Works.

‘The power of art’

It was especially important for Patterson to draw attention to incarcerated women, she said.

“Often times when we talk about mass incarceration, men are the focal point,” she said, but the number of women in prison has increased 750% since 1980. “Every last one of those women, whether they have made a mistake or not, work in the social justice field and are moving the needle. They’re brilliant. They’re doing amazing things in our community, and it’s important.”

Patterson also insisted that the artists involved in designing the projects be people who have been incarcerated.

She worked with Russell Craig, an artist from Philadelphia who was formerly incarcerated, and Jayme Santini, a local artist who spent time in prison.

“I wish I could have picked all of my sisters to put on this wall because every last one of them deserves a chance to be highlighted, to be recognized, because oftentimes we’re silenced,” Patterson said. “We have so many women that are here that can help change our world.”

The mural is ArtWorks' 200th. It's located at 235 W. Court St. on the side of a building owned by Sean Donovan, the former chief deputy of the Hamilton County Sheriff’s Office.

“I’m proud to have it on my building,” he said. “Everybody makes mistakes. So it’s good to see when people admit they made a mistake, do what they have to do to get through it and become productive members of our society. It’s a nice thing for Downtown – especially now.”

Houston said she’s proud, too, that ArtWorks and its mission to employ young people to make public art could help Patterson bring her vision to life.

“We’re hoping that the mural creates a feeling of empathy,” she said. “That it really speaks to people’s hearts so that it can help change people’s minds. That’s what we think the power of art can do.”