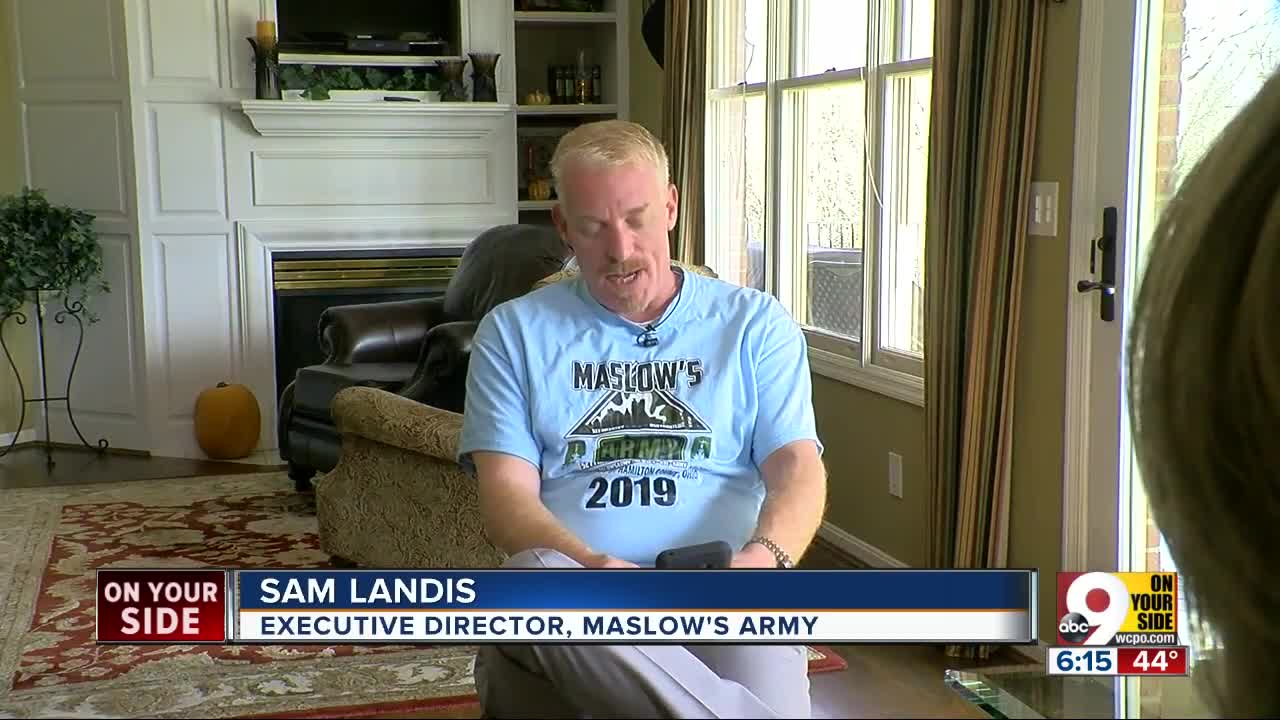 “I couldn’t believe it. I was astonished,” said Terry Walker, who is 71. “I’m very thankful to them. They’ve been super nice. These clothes I’ve got on, they bought me, even including the boots. I think the world of them. They’re a neat family.”

LOVELAND, Ohio — Terry Walker Sr. has a lot to be grateful for this Thanksgiving.

Less than two weeks ago, he was homeless despite a lifetime of work. He was sleeping on the floor of makeshift shelters each night and staying warm each day at the public library Downtown.

That changed Nov. 17 after Janice Folzenlogen read about Walker in a WCPO story posted on Facebook.

RELATED: Terry became homeless after a lifetime of work. He’s not alone.

“It really spoke to me and touched me, and I just felt like I needed to do something,” she said.

She asked her husband, Mark Folzenlogen, to read the story; he knew right away what she was thinking.

Within a few hours, the Folzenlogens and their two daughters had driven Downtown to the Maslow’s Army Sunday outreach outside the Hamilton County Justice Center to meet Walker.

They asked him on the spot if he wanted to stay with them for the winter at no charge so they could help him get back on his feet.

“I couldn’t believe it. I was astonished,” said Walker, who is 71. “I’m very thankful to them. They’ve been super nice. These clothes I’ve got on, they bought me, even including the boots. I think the world of them. They’re a neat family.”

The Folzenlogens had hoped to keep their invitation quiet.

“When we were driving down in the car, we said to our daughters, ‘We’re not putting this on Facebook. We don’t need to tell everybody. This is just something our family wants to do. Let’s just do this,’” Janice Folzenlogen said.

But Samuel Adams Landis and Brian Garry of Maslow’s Army convinced the family that making the story public would help educate others about the growing number of older people who are experiencing homelessness.

Landis made a cell phone video of the family’s emotional meeting with Walker and posted it on the Maslow’s Army Facebook page. In just over a week, it had more than 42,000 views and was shared 790 times.

“It warms the very heart,” said Landis, the executive director and co-founder of Maslow’s Army. “It reaches down to the inner most part of humanity, and it just makes people feel good that there are people out there doing these random acts of kindness that are so significant.”

The Folzenlogens said meeting the Maslow’s Army team has inspired them to do even more.

The couple owns A-One Fine Dry Cleaning and for years has put up Christmas trees in the stores with ornaments that customers can select to purchase holiday gifts for people in need.

“We’ve done kids for the last nine years, and we’re doing children again,” Janice Folzenlogen said. “When we met Brian and Sam and actually saw the hundreds of people down there (at the Maslow’s Army Sunday outreach), it just felt like here’s a whole other population we could help.”

Since the couple brought Walker into their home, they have mobilized their friends, family members and an organization called Cincinnati Blue Goose to collect donations of boots and clothing for Maslow’s Army to distribute to people experiencing homelessness.

“We’re thinking that maybe this is a different direction and a new calling for us,” Mark Folzenlogen said.

There is tremendous need, Landis said, because of the growing number of older adults that are becoming homeless.

“In June of 2019, the average retirement benefit for people on Social Security was $1,470. In the same month, the average rent was $996, which was a 3% increase from the year prior to it,” Landis said. “We must do better at having low-income housing.”

Walker was making payments on a rent-to-own home in Indianapolis when the company he was working with repossessed it, he said.

“That’s when I started going down hill,” Walker said.

Because he gets a pension from the railroad, Walker doesn’t qualify for Social Security, he said. He’s estranged from his daughters and hasn’t been able to reconnect with a son who lived in the Greater Cincinnati area the last Walker heard.

His credit score is bad because of some medical bills that piled up, Walker said, and he has never been able to build up much of a savings account.

He told WCPO that he has been homeless eight or 10 times in the past four years, all since he retired from the railroad after nearly 30 years of service.

Now, staying with the Folzenlogens, he can save up his pension checks until he has enough for a deposit and first month’s rent for an apartment, he said.

“And me and Mark both want me to have a good savings built up, too, for emergencies,” Walker said. “Mark has had lots of talks with me. And he’s going to see that I don’t get in trouble like this ever again. I gave him my word that, you know, that’s my desire. That this never happens again.”

'A match made in heaven'

Walker has his own bedroom with a king-sized bed and an adjoining bathroom in the finished basement of the family’s Loveland home.

“I actually get a shower every day,” which is a big change from being homeless, Walker said.

Janice Folzenlogen’s father lived with the family for 10 years before his death in 2013, so it felt natural to bring an older gentleman back into the house, she and her husband said.

“He’s filling a void that we have in our family right now,” Mark Folzenlogen said. “He’s just a lot of fun to have, and it’s a pleasure.”

“I will say our daughter came down the first morning, and she said, ‘It’s like seeing Grandpa sitting in the chair again,’” Janice Folzenlogen said. “He takes up the same space. And, you know, it’s a little odd, but he kind of looks like my father.”

The family’s dog, Brutus, has welcomed Walker, too. Brutus belonged to Janice Folzenlogen’s father, she said, and has seemed lonely being at the house all day by himself since her father’s death.

“Well here comes Terry in the same chair, and it is like a match made in heaven,” Janice Folzenlogen said. “Terry feeds him a little more than we’d like. But what the heck. He’s an old dog. He’s happy.”

Everybody seems pretty happy at the Folzenlogen house these days.

Her husband’s even bigger family wants to make sure Walker will be part of the white elephant gift exchange for Christmas.

Walker said he couldn’t help but be a little nervous when a family of strangers invited him into their home, but his concerns quickly melted away.

“I just felt the warmth and the love,” he said. “I was very happy to go with them. I didn’t have no worries.”

Now Walker is looking forward to what he figures could be one of his best Thanksgivings ever. He hopes to go with Mark Folzenlogen to help Maslow’s Army with outreach on Thanksgiving morning before the family meal.

“To be helpful to them would mean something to me,” he said. “I’d like to see everybody get some help.”

He’s already looking ahead to Christmas, too.

“I asked Santa Claus for a good woman that wouldn’t be after my money,” Walker said with a wry smile. “He said, ‘I don’t deliver women.’”

Maslow’s Army has transported hundreds of homeless people to shelters this winter so they don’t have to sleep outside in the cold. The organization is all-volunteer and is always seeking donations. More information about Maslow’s Army, and how you can help, is available online.