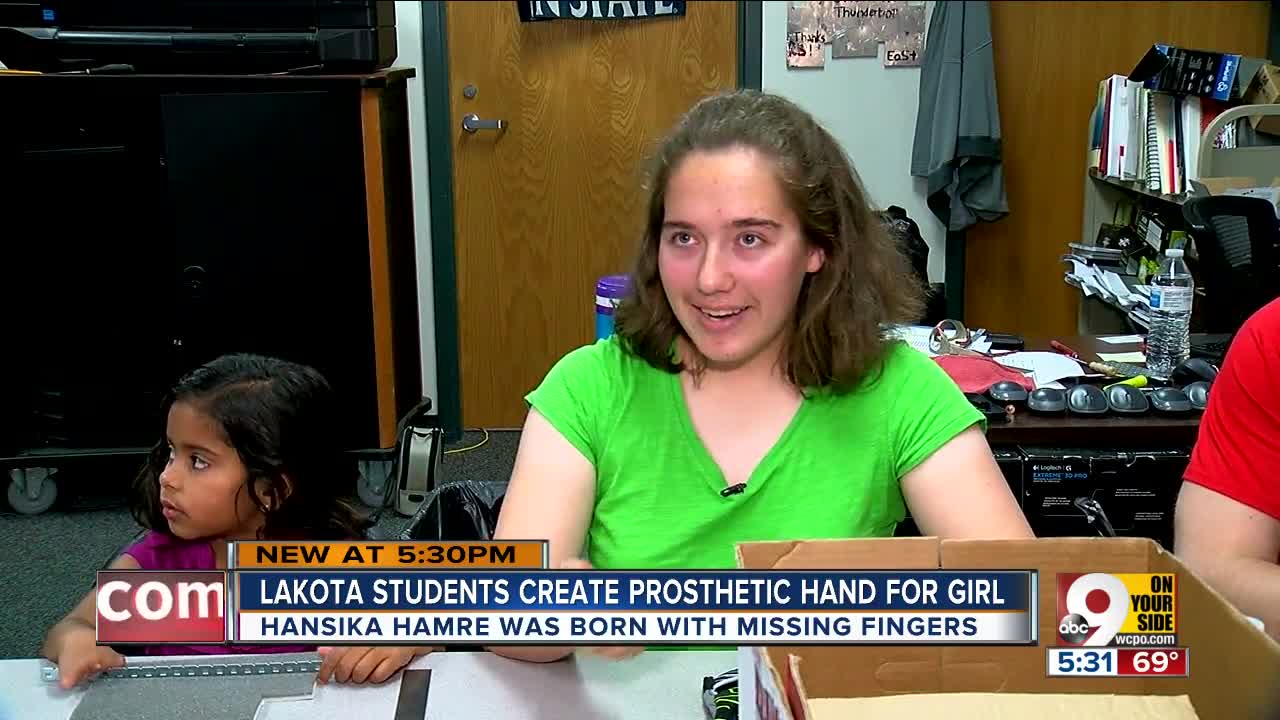 While most kids are planning how to spend their summer break, several students at Lakota East High School are working on a project to change a little girl's life.

CINCINNATI — Five-year-old Hansika Hamre beamed Wednesday as a group of Lakota East High School students presented her with a gift that could change her life forever: A prototype prosthetic hand made specifically for her.

She was born with a condition called symbrachydactyly, which causes babies to be born with shorter digits or missing fingers and toes. Hansika's left hand is fully developed, with five fingers and a full range of motion, but her right isn't.

"She's incredibly independent," her mother, Cara Hambre, said. "She can do lots of things on her own."

To help Hansika do even more, several students in an engineering class at Lakota East through Butler Tech decided to create a prosthetic hand for Hansika for their senior capstone project. They had help from Evendale-based Kinetic Vision, a technology and product development company. They took 3D geometric scans of her hands so that the students would have the dimensions they needed to create Hansika's new prosthetic

"Seeing her face, it just makes everything we've gone through just worth it," Hoffman said Wednesday, a senior working on the project. She said it was important for Hansika to really like her new hand, and the group would make any changes she wanted to ensure she had a final product that fit her needs.

The class gives the students a chance to experience engineering in a real-life setting, according to engineering instructor Ken Kinch.

"They're using the skills they've learned on a real-world challenge, and I think it also drives home the importance of community service," he said.

"To have them kind of reach out and kind of do something so neat and special for her. I mean it's pretty cool to see kids these days show that kind of care and love," he said.

Senior Sam Billisits, who is also working on the project, said he and his classmates went with Hansika to a local playground near the start. There, they saw her tackle a challenge exacerbated by her symbrachydactyly: The monkey bars. She still loves them, but her limb difference means she needs to approach them differently from most other children.

"She was doing monkey bars just by hanging her wrist into it," said Billisits.

He said the group really hopes her new prosthetic will make it easier. Hansika hopes so, too.

"I really want to do the monkey bars by myself," she told the students when she saw the hand.

And that's just one item on the list, according to her mother: "(She wants to) button her buttons and you know, kind of tie her shoe laces and things like that that we all take for granted."

"I play softball, they play football," said Hoffman. They bought several sized gloves to see which was the best fit.

The students will finalize their design and give it to Hansika on Friday.