'We're really doing this on a prayer right now' 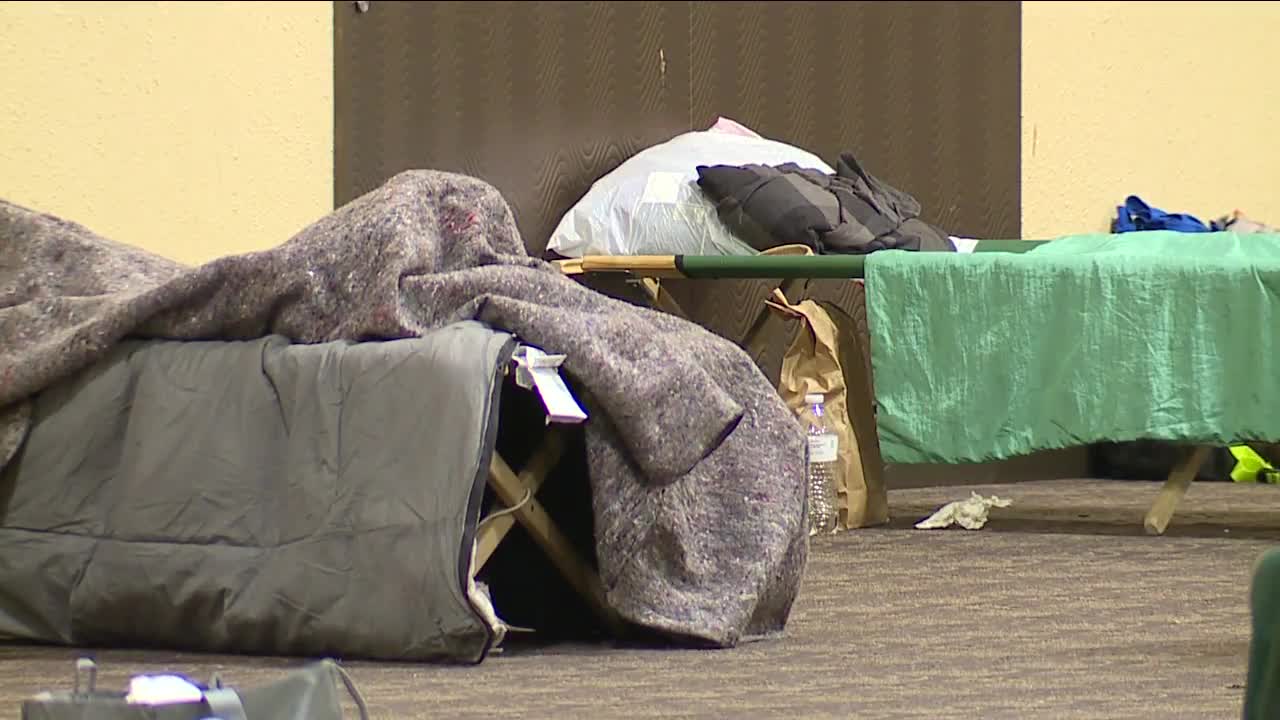 Welcome House of Northern Kentucky, the Emergency Shelter of Northern Kentucky and other social service agencies opened the makeshift shelter March 21 to give 65 people a safe place to stay out of the cold and practice social distancing during the COVID-19 crisis.

UPDATE: The people staying at the Northern Kentucky Convention Center moved late Saturday morning into hotel rooms. Welcome House of Northern Kentucky will cover the cost of lodging at $12,475 per week. Welcome House also will staff the hotel with a nurse and other staff daily. Other local organizations will provide three meals a day, according to Welcome House CEO Danielle Amrine. Welcome House is seeking donations to help the with costs. Find information about how to donate at the end of this story.

COVINGTON, Ky. -- In the time that Brian Denny has been homeless, he has stayed in local churches, in shelters and on the streets.

Since March 21, Denny has had a roof over his head — a really big roof.

He’s among dozens of men and women living at a temporary homeless shelter at the Northern Kentucky Convention Center.

“It’s been nice,” said Denny, who is 52. “They’re good people. They take care of you, you know. They’ve gone above and beyond.”

Welcome House of Northern Kentucky, the Emergency Shelter of Northern Kentucky and other social service agencies in the region opened the makeshift shelter March 21, giving 65 people a safe place to stay while practicing social distancing during the COVID-19 crisis.

The goal was to keep the shelter open for two weeks to keep people out of the cold and to reduce the possible spread of the highly contagious new coronavirus. Welcome House CEO Danielle Amrine said the nonprofit organizations operating the shelter plan to move everyone out Saturday, but they hope to find a hotel that will accommodate the group for the next month.

“We are still trying to find a hotel that we can move to on Saturday,” she said. “We’ve had some hotels that are contemplating closing their doors, and then some that are not interested in renting to us.”

Amrine estimates it will cost about $50,000 to house them in hotel rooms until the beginning of May. The nonprofit organizations involved will be paying that cost upfront in hopes of getting reimbursements, she said, possibly from some of the charitable funds being raised to help people during the COVID-19 crisis.

“We’re really doing this on a prayer right now, but it’s the right thing to do,” she said. “We feel like it just needs to be done for the clients that we serve and for the community, too.”

The operation at the convention center has gone smoothly, said Amrine, who spent 13 years working for the American Red Cross and helped with disaster relief operations after Hurricane Katrina and 9/11.

“Every day keeps getting better. Everybody keeps getting more in the flow. Everybody’s getting a routine down,” Amrine said. “We’ve kind of got a better handle on how we’re going to assist people and get people connected to resources.”

Staff and volunteers at the temporary shelter helped several people staying there reconnect with relatives so they could stay with family during the pandemic, Amrine said, helping to bring down the number of people staying at the shelter to 54 as of April 1.

The organizations operating the shelter also got some phones so that people staying there could call medical providers and keep their doctor’s appointments even though they couldn’t go in person, she said. And the staff has been working to help people figure out potential housing and get case-management services.

“We’re not going to let go and let this population fall through the cracks,” she said. “What has just been absolutely heartwarming is that everybody else in the community has been able to see how great this population is to work with and how willing they are to work and kind of getting rid of all those misconceptions that people have about homelessness.”

The men and women who have been living at the convention center have been helping with the work that needs to be done inside, said Pastor James Duncan, chaplain of the Covington Lord’s Gym location.

“Everybody’s stepping up,” Duncan said. “We’ve got our homeless friends, you know. They’re mopping the bathrooms back there. They’re vacuuming. They’re sweeping. They’re helping as much as they can. Everybody’s just working together. It’s been unbelievable.”

The Covington Lord’s Gym has had between five and eight people at the convention center each day to help out, Duncan said.

The organization has been shuttling groups of five people at a time to its Queensgate location so they can take showers every few days, he said.

Duncan and his team also have been handling the morning shift at the convention center from 7 a.m. to noon each day.

“We help with breakfast. We help with lunch. We help with whatever security needs need to happen,” he said. “And we’re just here to love our friends. We love God, and we love others. So that’s kind of what we do.”

Amrine said the Lord’s Gym is one of many local organizations that have been helping Welcome House and the Emergency Shelter of Northern Kentucky with the temporary shelter.

“We’ve had such an outpouring of kindness and generosity from our other community partners,” Amrine said. “Northern Kentucky just is such a tight-knit community. And everybody is just willing to help each other out no matter what.”

Denny said he and the others staying at the convention center appreciate it.

The shelter staff put Denny in charge of the big-screen TV set up in the convention center where cots are set up in 100-square-foot areas for people to sleep. He asks what people want to watch and manages the controller so there’s no arguing, he said.

“We have church everyday on the TV, and then we have a news hour, hour and a half, something like that,” he said. “It’s been pretty good.”

A lot of the people staying at the convention center have been feeling scared and vulnerable during the COVID-19 crisis, he said, although Denny doesn’t count himself among them.

He hasn’t always been so hopeful.

Denny's story of homelessness started with medical problems. He was involved in a car crash and broke his fourth vertebrae, he said. The injury was so bad that he could hardly walk for two years. That made it hard for him to work, he said, which made it hard to pay the bills.

Denny said he knows that many look at people experiencing homelessness and assume they are alcoholics or have drug addictions, but even those who are struggling with addiction, often have underlying problems that led them there.

“I went down that road for a little while myself,” he said. “It’s a vicious cycle, and you just lose hope and lose faith. And it’s like there ain’t no outcome. Nothing good. But you get past that.”

For now, Denny is spending his days helping out at the convention center the best he can and soaking up the goodness that surrounds him.

“Corona, it’s like a double-dagger edge. You’ve got what’s going on. But you’re seeing a lot more good out of people than what you normally would have,” he said. “I think everybody’s seeing it. It’s just human nature. The good’s coming out.”

To help with this effort to keep people experiencing homelessness sheltered during the COVID-19 crisis, you can donate online to Welcome House of Northern Kentucky, via Venmo to Welcome_HouseNKY or to any of the other community partners involved.