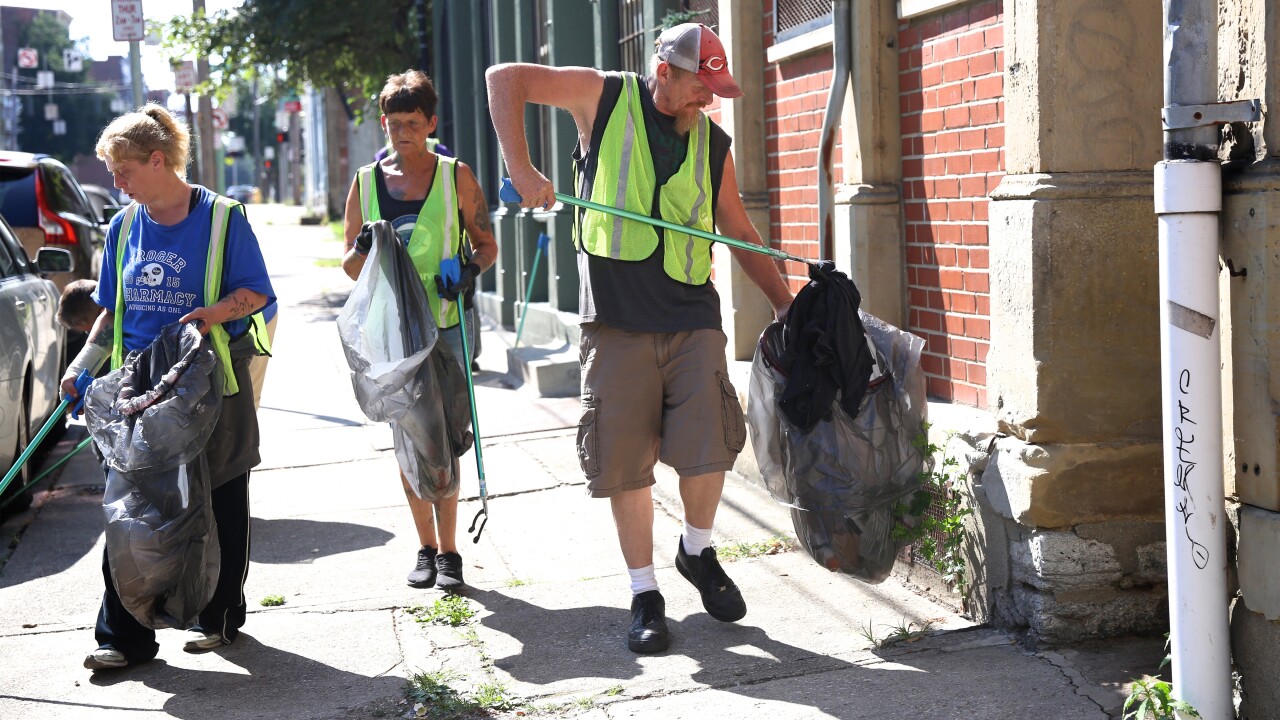 Emily Maxwell | WCPO
The Jobs Van program which is overseen by 3CDC provide&#39;s the city&#39;s homeless population with work and help. 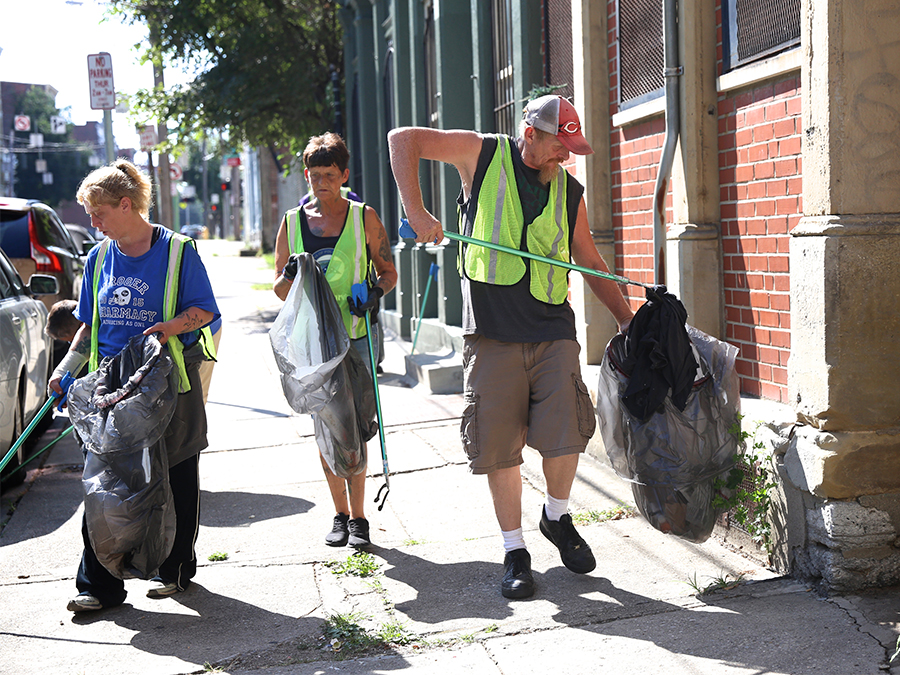 CINCINNATI — Lori Gilbert had been homeless for the better part of a year before picking up trash changed her life.

“I was approached at the beginning of the summer that they were starting a new program to help the homeless,” Gilbert said. “And I told them I was definitely interested.”

That program was the GeneroCity 513 Jobs Van.

Watch the video in the media player above to see more on the Jobs Van program.

Since July 1, 2018, the Jobs Van has operated four days a week, gathering panhandlers and paying them $9 an hour for five hours of picking up litter from city streets, sidewalks and vacant lots.

Most people who ride the van are homeless. Participants get a free lunch and are paid in cash.

“Really the goal of the program is to build a trust or rapport with those folks so we can try to connect them with social service agencies,” said Joe Rudemiller. He’s vice president of marketing and communications for the Cincinnati Center City Development Corp., or 3CDC, which oversees the GeneroCity 513 program.

“The first year was even more successful than we had hoped,” he said.

• Connecting 125 riders to other social services for assistance;

• And helping 18 people get permanent employment.

Gilbert was an early success story.

She spent months riding the Jobs Van as often as she could and got comfortable talking about her troubles with program manager Jim Cira, the City Gospel Mission staff member who drives the van.

It was a rainy October day when she texted Cira to ask if he could bring her a poncho.

“He asked me what I was doing for the day, and I was like, ‘Not really much. It’s raining outside, and I’m not sure what I’m going to do,’” she recalled.

Cira told her he was on his way to pick up someone else to take to addiction counseling services and asked if she wanted to go, too.

“I was like, ‘Sure. Why not? Let’s do this,’” she said. “It was time. I was tired of this life. And it was time to put an end to me hurting myself and hurting my family.”

Gilbert went from the substance abuse program to a shelter to a sober living house where she now lives. On Jan. 1, 3CDC hired her as a Downtown Ambassador to help keep the streets clean and provide directions for visitors to the city.

“I love what I do,” Gilbert said. “I love giving back to the city. I’m just ready to get my life back on track. I’m motivated today, and I’m done with that life.”

But not done with the Jobs Van.

Gilbert hopped back onto the van one recent weekday, this time as a volunteer.

She joked with Cira and greeted other riders by name, asking for updates.

“Hey Mark, I haven’t seen you in forever! How you doing, buddy?” she asked one man.

“There’s Curtis,” she said to Cira a little while later.

The riders mourned a man whose street name was "Onk." He had died the night before from pancreatic cancer, Cira said.

They worried about a woman named Bobbie Sue, whom they hadn’t seen in a while.

“I have an anniversary today,” Gilbert said to the group during a pause in the conversation. “Ten months. I’m never going back.”

The other riders offered their congratulations.

The conversation among riders has been an unexpected benefit of the Jobs Van program, Cira said.

“It’s a community. So many people isolate out here,” he said. “At least for a few hours, they have community.”

Denver Holt said he’s been riding the Jobs Van as often as he could for about a year. He was on Third Street holding a sign to ask for cash last year when Cira spotted him.

“Jim pulls up and asked if I was interested in making money,” Holt said. “I said, ‘Well yeah. It’s got to be better than standing here all day.’”

Cira has been working to help get housing for Holt, who said he has lived on the streets for nearly five years.

The cash he gets from the Jobs Van pays for his cigarettes and allows him to go out to eat, Holt said.

It wasn’t just the money that Gilbert appreciated when she was homeless, she said.

“It meant more to me, being able to do something for money instead of just standing there begging,” she said. “It kind of gave me a purpose in life again, and it kind of helped motivate me to get off the streets. It helped me remember that’s what I came from.”

The Jobs Van offers dignity and respect in addition to pay.

There were discussions early on about whether it made sense to pay participants in cash, Rudemiller said. Critics argue that people with substance abuse problems might use the money for drugs or alcohol.

But other cities with similar programs have found that cash works best, Rudemiller said. And the organizations involved with GeneroCity 513 figured that if people were desperate enough, they would find money for those things somehow.

3CDC and the Cincinnati Business Committee contribute toward GeneroCity’s $300,000 annual budget, Rudemiller said. The program gets support from the city of Cincinnati and from private foundations, too.

“We view this as a positive alternative to panhandling and really an opportunity to connect with these folks and give them that dignity of a day’s work and hopefully lift their spirits and make them want to take that next step,” Rudemiller said.

“Nobody knows where anybody’s money goes, and that’s not really our concern with this. Our concern is trying to help these individuals, trying to build a rapport with them and trying to connect them with the social service agency that can best help them in this time of need for many of them.”

The GeneroCity 513 program also employs three outreach workers who can help people on the street no matter what their location, mental state or housing situation might be. Greater Cincinnati Behavioral Health Services employs the outreach workers, who work throughout downtown Cincinnati and Over-the-Rhine seven days a week.

Still, the most visible part of the effort is the Jobs Van operated by City Gospel Mission.

Gilbert is one of 10 people the Jobs Van program has successfully gotten off the streets, Cira said.

She has been saving her money since she got the job with 3CDC and already has bought a car. She is now looking for a second, part-time job so she can afford her car insurance and earn enough to leave the sober house for a place of her own.

“Trying to make all the monies,” she said with a laugh that day on the Jobs Van.

Having Gilbert back on the Jobs Van as a volunteer was worth a lot to Cira.

“To have somebody that’s been out here before, knows the routine, not only on the van, but knows what every single person is going through right now,” he said.

Gilbert understands the worry and uncertainty of living on the street, he said.

“I hope she provides motivation and inspiration for everyone out here,” he said. “Because she is the walking hope right now.”

More information about GeneroCity 513, including how you can volunteer to help on the Jobs Van, is available online.