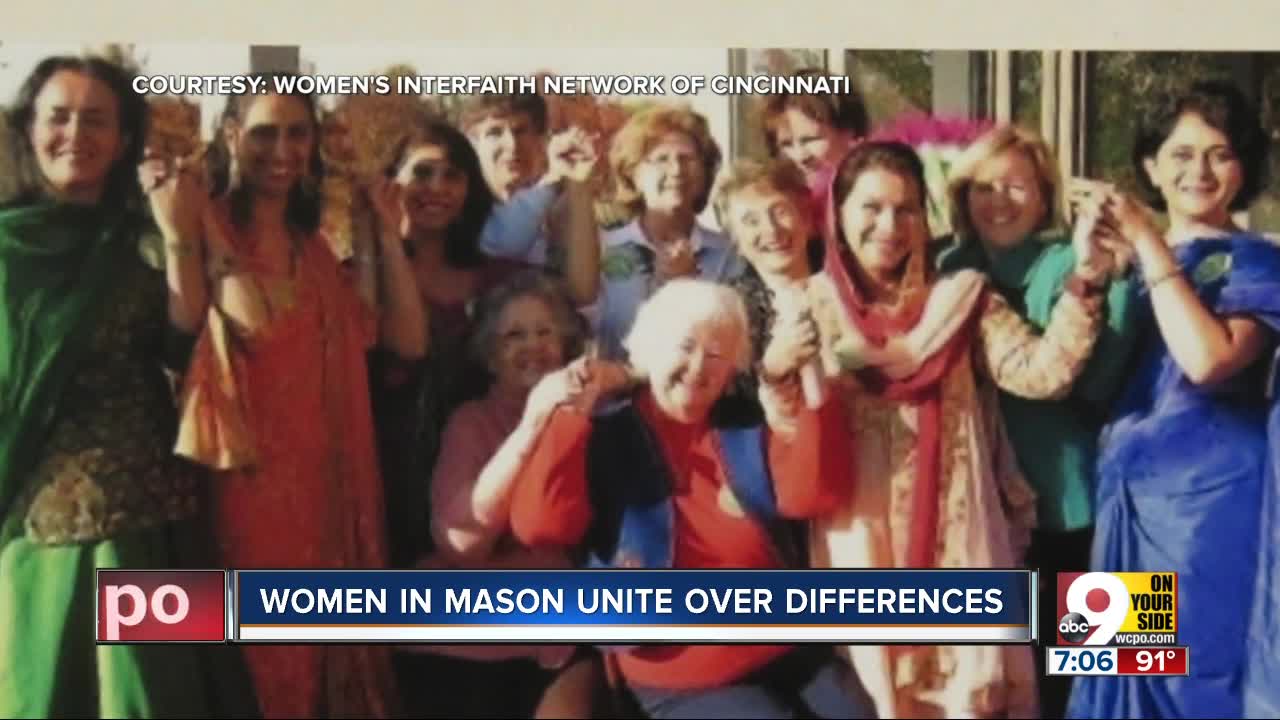 In the months after the 9/11 terrorist attacks, Clare Szucs began to notice that the Muslim women she usually saw at her neighborhood grocery store weren’t shopping there anymore. “Over a period of time, I kept thinking, ‘I ought to do something about that, start some kind of group so they feel comfortable,’” Szucs said.

In the months after the 9/11 terrorist attacks, Clare Szucs began to notice that the Muslim women she usually saw at her neighborhood grocery store weren’t shopping there anymore.

“Over a period of time, I kept thinking, ‘I ought to do something about that, start some kind of group so they feel comfortable,’” Szucs said.

Finally Szucs, a Lutheran who used to be a Catholic, called her friend Miriam Jackobs, who called Shakila Ahmad, president of the board of the Islamic Center of Greater Cincinnati. Ahmad called her friend Saba Chughtai and told her that a couple of women from St. Susanna Catholic Church wanted to connect with a woman from the mosque.

The idea was to bring together women from different cultures and religious backgrounds so they could learn more about each other’s faiths and share that knowledge with others.

Szucs, Jackobs and Chughtai soon met up at a Panera Bread location. By the end of that meeting in 2007, they had agreed to create the Women’s Interfaith Network of Cincinnati.

“I personally believe that women are natural peacemakers,” Chughtai said. “Our kids are so important for us, our families, and that itself helps us transcend all these religious and ethnic barriers.”

The group grew quickly, with the three women inviting more friends -- and friends of friends -- to join. Later that same year, Alycia McClurg became the first member representing The Church of Jesus Christ of Latter-day Saints.

Szucs wanted as many faiths represented as possible, said McClurg, who currently serves as a co-president of the group.

“In her words, she said, ‘You know what we need in this group? We need a Mormon,’” McClurg said with a smile. “Laura, a friend of mine, said, ‘I know one of those.’ So she called me and asked me to join the group.”

In the dozen years since, the network has grown into three groups that meet at different times. In addition to learning about each other’s faiths, the women also have delved into the issues of human trafficking, child poverty and hunger.

The network’s members have attended each other’s houses of worship to show support after times of tragedy. They have volunteered for the Ronald McDonald House and Interfaith Hospitality Network, and they’ve held fundraisers and donated more than $20,000 to local nonprofit organizations.

“What I’ve learned the most is that we are more alike than we are different,” McClurg said. “We have so much in common.”

That seems just as important now as it was when the group formed, Chughtai said.

“We tend to sometimes focus on our differences. We should be focusing on what we have in common that will unite us,” she said. “In many ways, I’ve evolved through this group. It has made me a better person.”

Every time Chughtai leaves one of the network’s monthly meetings, she said she feels “motivated to do more, to reach out to more people.”

“I’m a psychiatrist by profession,” she said. “It helps me in that realm, too.”

McClurg said she also has learned a lot by being part of the group.

“I’ve just really learned to love these ladies, and I find myself defending their faiths,” she said. “Probably the biggest one is things about the Muslim faith. I know a lot of people have the impression that the women in that faith do not have much of a say in their lives.”

McClurg has learned that’s not at the heart of Islam, she said.

“I’ve learned not to confuse religions with the culture of a country,” she said. “The religion of Islam does not teach that at all.”

The goal: A more understanding community

Misunderstandings about Muslim women were among the reasons Chughtai agreed to help start the group in the first place, she said.

“There was such misconception about Islam and Muslims in general, but also about Muslim women in particular,” Chughtai said. “You know, everybody thought that we stay home, we don't go out, we don't have a career, we're completely subjugated by our men. So there was more than one need. There was the need to tell people what Islam is, but there was also a need to tell what a Muslim woman is.”

The group’s members talk about how women are represented in all their different faiths, she said, in addition to issues that concern women generally.

“How cultures look at women and how women have dealt with injustice,” Chughtai said. “There is empathy all over. Just because we are all women, we can understand what we have dealt with.”

Szucs said she would like to see the group become even more inclusive with more African American members and Buddhists, for example.

The group welcomes new members, McClurg said, as long as they are there to learn and can listen and be respectful.

“There’s never been an argument in this group at all,” she said. “They’re all people who are just genuinely interested in learning.”

As the network grows, McClurg said she hopes it can be a remedy of sorts for the divisions that persist across Greater Cincinnati and the country as a whole.

“This is kind of cliché, but the more you understand, the less you fear,” she said.

“We’re just our own little, small pocket in a little suburb of Cincinnati,” McClurg added. “If we could have pockets of this group all over, I think you would have a more understanding community.”

For more information about the Women’s Interfaith Network of Cincinnati and how to join, email WINC6791@gmail.com.