'It's about helping people how they need help' 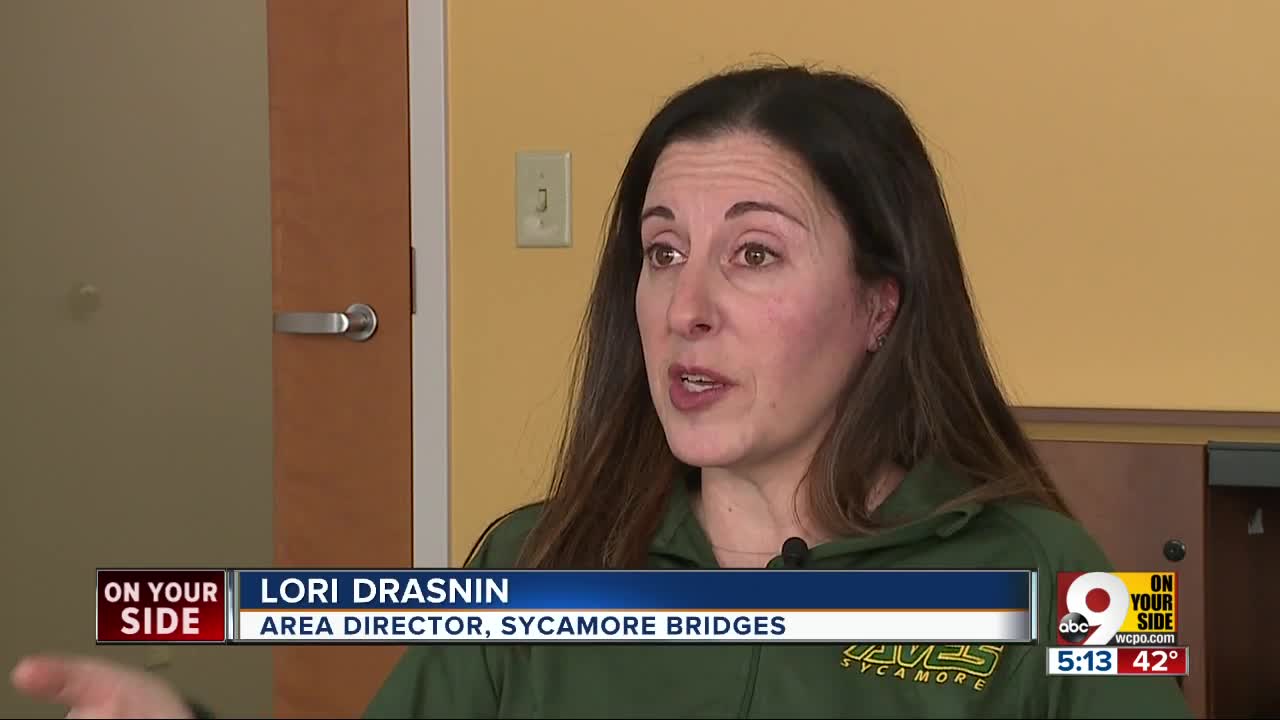 The idea is to allow teachers, guidance counselors and other trusted community advocates to identify students or families with specific needs and then make community members aware of those needs so they can help. The program exists in nine suburban school districts in Ohio and 12 in Alabama. Sycamore Bridges already has donated $22,000 in goods and financial contributions over the past seven months, said Lori Drasnin, a former PTO president who now serves as area director for Sycamore Bridges. 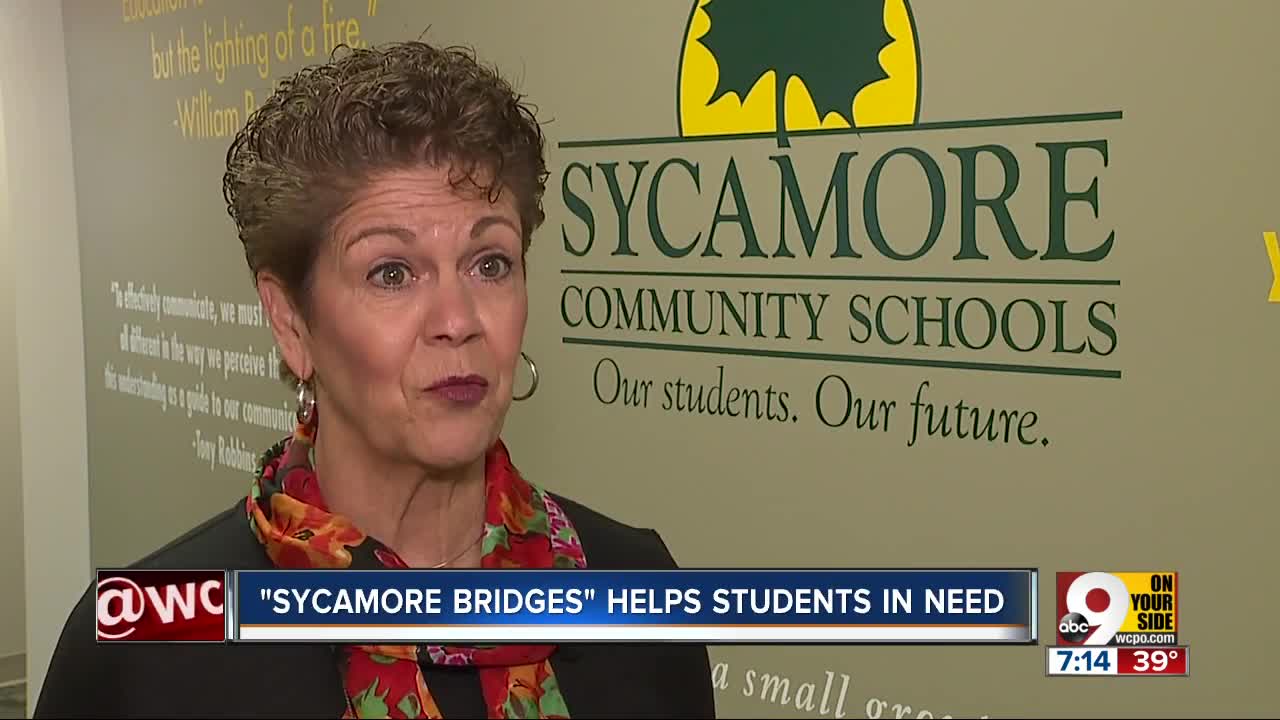 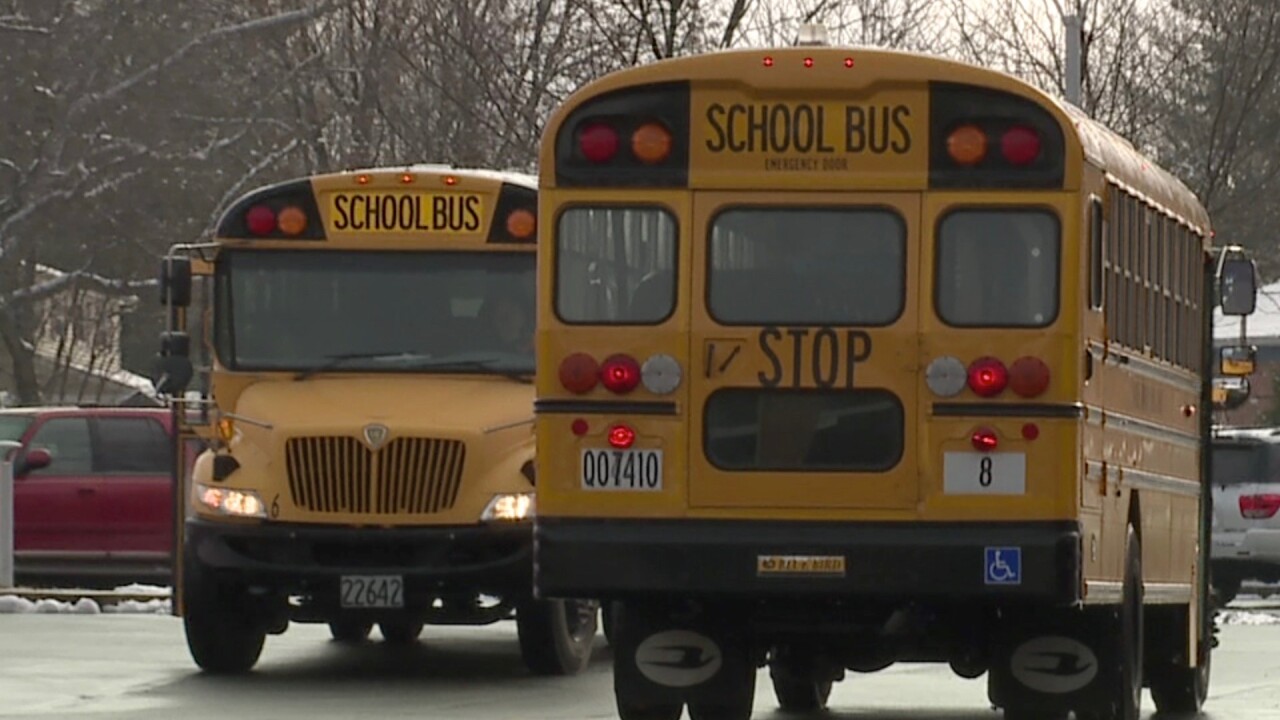 BLUE ASH, Ohio — Sycamore Community Schools are known in Greater Cincinnati for having top rankings and high-achieving students, but the affluent school district has another side that is far less visible: a growing number of families living in poverty.

When assistant superintendent Karen Naber started at Sycamore in 1998, fewer than 4% of its students qualified for free or reduced-price lunch. Now, she said, that number stands at nearly 16%.

“Families are finding affordable housing in certain pockets of our district, but they’re the families who are working two and three jobs to make sure their kids can get a really good education,” Naber said. “And, at times, they’re living paycheck to paycheck.”

That’s why Naber got so excited when she heard about Neighborhood Bridges, a nonprofit organization started in Westerville, Ohio, that calls itself a “gateway for kindness.”

The idea is to allow teachers, guidance counselors and other trusted community advocates to identify students or families with specific needs and then make community members aware of those needs so they can help. The program exists in nine suburban school districts in Ohio and 12 in Alabama.

Sycamore Community Schools launched Sycamore Bridges in May, becoming the first school district in Southwest Ohio to have the program.

Sycamore Bridges already has donated $22,000 in goods and financial contributions over the past seven months, said Lori Drasnin, a former PTO president who now serves as area director for Sycamore Bridges.

“We’ve done simple things like graphing calculators for high school students who want to take a more challenging math course. We’ve paid for AP exam fees, but then we’ve also paid rent, car payments, utility bills,” Drasnin said. “We say there’s no need that’s too big or too small. It’s about helping people how they need help the most.”

‘A campaign for kindness’

That’s exactly what Rick Bannister had in mind when he created Neighborhood Bridges nearly three years ago.

Bannister is a former school board member in Westerville, an affluent suburb on the northeast side of Columbus.

When he served on the board 20 years ago, he said, about 8% of the district's students qualified for free and reduced-price lunch. Now that number is 33%, he said.

“We could see it, not only as a former school board member, but really through the lens of a parent,” Bannister said. “Seeing our kids move through the schools and seeing the needs and how it was changing.”

Bannister had run school levy campaigns in the community, and that experience combined with the growing need made him think: “Why can’t we run a daily campaign for kindness and engage the community?”

He developed the idea for an online platform that would make people in the community aware of specific needs they could help meet. After trying to give the idea away to a local nonprofit, he left his job as chief operating officer of the Ohio Bar Association in January 2017 to launch the nonprofit himself.

Bannister said he and his wife self-funded Neighborhood Bridges during its first year. It now gets corporate sponsorships to help fund its operations, and Bannister takes a small salary.

But the organization is still driven by volunteers and never charges school districts to be part of the program, he said.

“The residents in a lot of these communities are not aware of the needs because it’s been hidden or it’s developed over the past 20 years,” Bannister said. “I intend to continue to offer this to communities who want to address and engage in their communities to address the growing needs of school-aged kids.”

More poverty in the suburbs

A Brookings Institution analysis found that between 2000 and 2015, the number of people living in poverty in the suburbs grew far more rapidly than in any other type of community in the U.S.

In fact, suburbs in the country’s largest metropolitan areas saw the number of their residents living in poverty grow by 57% during that 15-year period, according to the study, with more poor people living in suburbs than in cities by 2015.

Neighborhood Bridges aims to work with school districts in those suburbs that often have fewer resources to help families living in poverty than their urban counterparts do, Bannister said.

“We have found everywhere that communities are embracing this and are more than happy to help,” he said. “They get emotional over this, that they want to help children, and they didn’t know how to do it.”

Word about Sycamore’s success has gotten out, and Bannister said he expects two more Southwest Ohio school districts to launch their own Neighborhood Bridges program after the first of the year: Ross Local Schools in Butler County and Lebanon City Schools in Warren County.

School counselors, nurses, local clergy and other advocates identify students or families who have a specific need and inform Drasnin.

“They really help us in vetting everything that comes through to make sure it’s completely legit,” she said.

Drasnin can ask questions about the need, but the recipients’ names are kept anonymous to protect their privacy.

Drasnin then posts the need to the Sycamore Bridges website and social media accounts and emails information to the hundreds of people who have subscribed to get updates.

People who want to help financially can donate through PayPal on the Sycamore Bridges website. Goods can be left at one of the program’s drop-off sites at the Blue Ash and Montgomery fire stations.

“Once the collections are in, I go pick them up. Then I deliver the items to the advocates,” she said. “This keeps the identity of our recipients safe and protected.”

A “kindness council” made up of more than 20 school and community leaders helps guide Drasnin’s work.

Drasnin said she has been surprised by how quickly the needs are met.

The families that have benefited have found different ways to show their appreciation, she said.

One family that got help from Sycamore Bridges a while back decided to host a “giving party” this holiday season and asked all their attendees to donate to the organization.

“We say kindness is contagious, and we see it over and over again,” Drasnin said.

It has been a big help to the district’s teachers, too, Naber said.

Where in the past, teachers have spent their own money to buy a winter coat for one student or a prom ticket for another, now they can refer those needs to Sycamore Bridges, she said.

“That kindness momentum has just been elevated to a whole new level,” she said. “Now we know when somebody needs something that Sycamore Bridges can do that work. And with the help of Lori and her team of community advocates, we’ve been able to do some really amazing things that we couldn’t have done just by reaching in our own pockets.”

The program has helped 153 Sycamore family members so far, Drasnin said, and has 354 email subscribers.

Bannister said he has been impressed with how much Sycamore Bridges has been able to accomplish in such a short time.

“Lori and the team in Sycamore, they’re the best of the best,” he said. “We play a very small role. We just let people be great. And they are. They really are.”