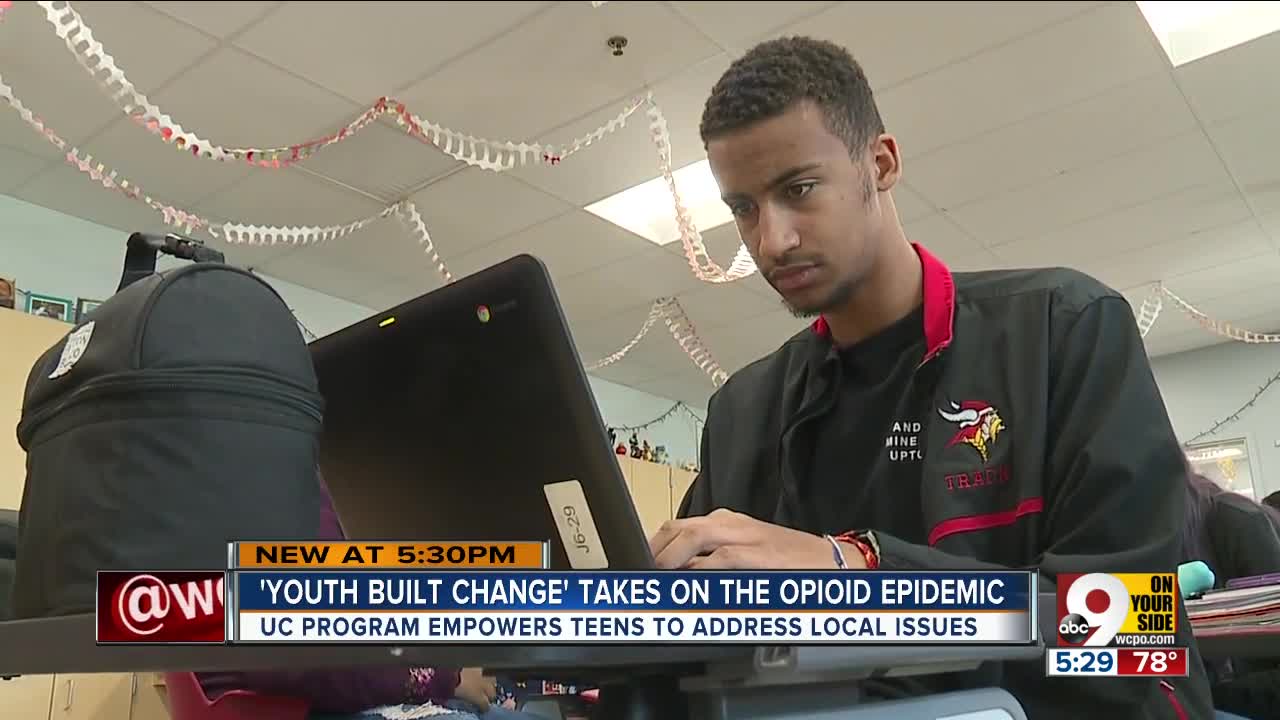 Youth Built Change is a student-led research initiative overseen by faculty and graduate students at the University of Cincinnati and funded by a National Institutes for Health grant. 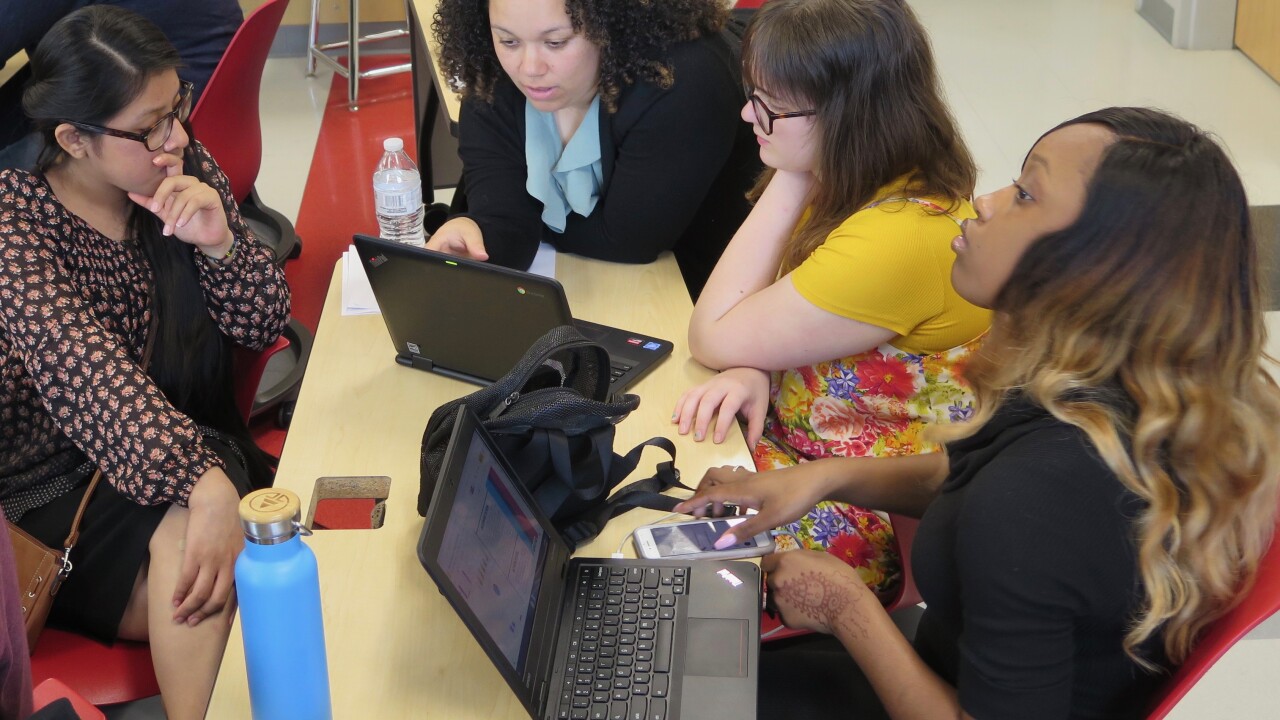 So when the 17-year-old had the opportunity to help develop new ways to address the opioid crisis, she jumped at the chance.

“I’m not a person that likes to just stand back and look at things falling apart. I like to do what I can to make a difference,” said Maria, a junior at Princeton High School. “I’m a believer that if you aren’t trying to help solve the problem, then you’re becoming part of it.”

Her opportunity to help came through Youth Built Change, a student-led research initiative overseen by faculty and graduate students at the University of Cincinnati and funded by a National Institutes for Health grant.

Students involved in the work just completed the first year of what will be a five-year project.

“It’s basically the idea that, in order to use research to actually make a difference in the world, we have to do research with people instead of on people,” said Farrah Jacquez, an associate professor in UC’s psychology department and the project’s faculty leader. “Their lived experience is really what’s going to help us solve problems.”

High school juniors might seem young to tackle such a serious community problem, but many of the student researchers were like Maria. Their own lived experiences made them passionate about the work.

“When I was seven, I was adopted because my parents were addicted to substances,” said Jerrell Francisco, a 17-year-old junior at Princeton High School. “I really wanted to have an opportunity to change that.”

Even more students at Manchester High School, the other local school taking part in the project, had direct experience that drove their interest, Jacquez said. Not involving them in the work does not protect them from the problem.

“At Manchester, it’s like I know about this because my dad overdosed or because my mom is currently in prison,” she said. “They know exactly what’s happening because they see it all around them all the time.”

Students at both schools were selected for the initiative before the end of their sophomore years.

The project launched with an explanation at UC and a chance to spend the night on campus in May of 2018. As soon as this past school year began, UC graduate students Alicia Boards and Alice Deters began traveling to the two schools each week to help the students and their teachers through the process.

It was a huge change from any standard high school curriculum, said Rebecca Heckman, who taught the class at Princeton High School.

“With state testing and everything else that we deal with as teachers, our curriculums are pretty set. There’s this and this and this,” said Heckman, the science department chair at Princeton. “This was a moving target, and the kids were deciding what they were going to do. I gave them very little direction.”

The class was like nothing else Heckman had ever done in her 30 years as a teacher, she said.

“It was interesting to help them realize we don’t know the right answer,” she said. “You have to go research it.”

Boards and Deters, who are both working toward PhDs in educational studies, said the project isn’t only about helping teachers and their students approach learning in a different way.

It’s also about helping students learn how they can have an impact through research, even at a young age.

“It’s a way to start the pipeline earlier and a way to increase youth activism and voice,” Boards said. “Now they can see themselves being able to do research that matters.”

The fact that the students’ research was grounded in their own experience makes it all the more meaningful, Deters added.

“It’s incredibly brave that they’re able to own that experience and use these research skills they’re developing to actually do something about it,” she said.

One of the student teams at Princeton High School surveyed middle school students to get a sense for when they started to become aware of drugs in the community.

Maria and Jerrell's group researched how to better reconnect recovering addicts with the community.

“We found out that, people that are addicted to substances, there is no real solution to fix them,” Jerrell said. “The solution we came up with was just rehab. We need to figure out a way to get them there.”

The students thought it would be a good idea to create an organization to help people get into rehab by giving each person a sponsor and providing financial support when necessary, Maria said.

Princeton junior Sharon Ramires said her team focused on surveying sophomores to figure out how prevalent peer pressure was when it came to trying drugs or using them.

“They don’t feel it’s discussed enough at school,” she said.

The Princeton students will present their findings at a school board meeting in August, Jacquez said.

The Manchester students presented findings to their school board on May 8 and already are making a difference.

One of the student teams there researched the impact of a Manchester Local Schools policy of drug testing students who participate in after-school activities.

“It has affected our sports teams majorly because we used to be really good, and now we’re not,” Elisa Brown, a Manchester High School junior explained during a presentation about the research at UC last month.

The team surveyed 174 of the high school’s 255 students and found that some had stopped participating in after-school activities because of the policy.

“Our hope is that our school will find a way to help our students and keep them away from drugs,” Manchester junior Jalyn Thacker said of the group’s research.

Manchester High chemistry and biology teacher Brittnee Inman said she was impressed by the students’ initiative and professionalism, and so were school district leaders.

“It’s not like they just wanted to say ‘stop the drug testing.’ They wanted to prove that maybe it’s not so effective,” said Inman, who supervised the Manchester students’ work. “It does cost money, and we’re struggling as a district with finances due to the local power plant’s closing.”

The power of listening

The Manchester High students asked district leaders whether they would re-examine the drug testing policy over the summer, and several school board members were receptive to the idea, she said.

It was a result the students didn’t expect when they began the project.

“Almost every single one of them said, 'At the beginning, I felt like, what can I do? I’m just a high school student. Nobody is going to listen to us,'” Inman said. “But by the end, I think they saw they were getting the community involved.”

Several high school seniors at each school will serve as peer leaders to help guide the juniors who will work on the second year of the five-year project.

Jacquez said she hopes having those older students who have experience with the class will be helpful to the new group.

“I’m hoping that it makes things feel less scary,” she said. “This year they definitely felt like guinea pigs.”

One of the biggest lessons this first group of student researchers learned was the importance of listening, Deters said.

“I think that’s what a lot of research in general, even at our level and beyond, misses,” she said. “We don’t really listen to the people that we’re trying to help.”

They also have seen how they can be effective community activists, even as teenagers, Boards said.

“If we can start 16-year-olds and 17-year-olds feeling like they can make a difference, I think long-term, that’s how we’re going to shift the way in which the world operates and our communities thrive and succeed,” she said. “And we get out of this whole deficit and all these barriers to communities but we actually see the positive and the good that our communities can have for generations to come.”