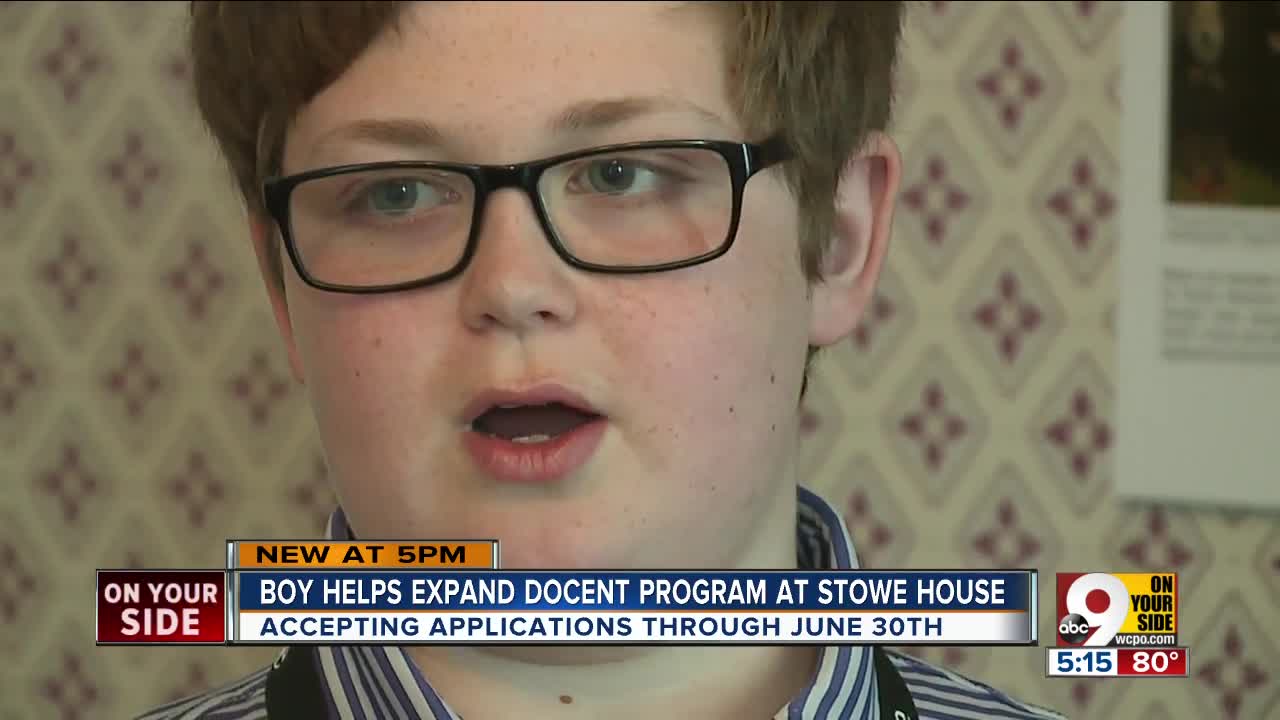 An Oakley teenager became the first youth docent for the Harriet Beecher Stowe House in Walnut Hills. It was such a success that he is working to expand the program.

CINCINNATI — If you have ever wondered whether kids today care about history, look no further than Magnus Knudsen.

For his bar mitzvah service project, Magnus approached the Harriet Beecher Stowe House in Walnut Hills and asked to be trained as a docent.

He learned all about the historical site and made a presentation to his family and friends, then began volunteering to give tours soon after.

“He’s always been a good student, a good community-service type person,” said Christina Hartlieb, the Harriett Beecher Stowe House’s executive director and a family friend. “It was a big success.”

It didn’t stop there.

Magnus enjoyed the work so much that he suggested Hartlieb expand the youth docent program and train more teenagers to help out.

Thanks to a grant from the U.S. Bank Foundation, the Harriet Beecher Stowe House is doing just that. Hartlieb will accept applications through June 30. The goal is to select a diverse group of 10 additional youth docents to learn about the house, hone their storytelling skills and help visitors learn about the site’s significance.

“Not everybody knows that Cincinnati was significant because during times of slavery, Cincinnati was often the first stopping point for slaves who were trying to run away. They would often come to houses that were on the Underground Railroad,” said Magnus, who is 13 and will be a ninth-grader at Cincinnati Public Schools’ Spencer Center for Gifted and Exceptional Students in the fall. “It’s good to know the history of where you came from and to know that it would be a lot different if that didn’t happen.”

He's more than a tour guide

As a docent, Magnus has to be able to open and close the house, help with maintenance and operate the cash register in the gift shop.

“Anything that I know about the house, I have learned from him,” his dad, Craig Rozen, said. “The Harriet Beecher Stowe House is a good opportunity for him.”

Magnus came up with the idea of becoming a youth docent, he said, after visiting the historic site with his dad and thinking it was “very cool.”

“I realized that they didn’t have any youth in the program,” Magnus said. “I thought that maybe if I did it and told my friends and family about it that maybe more people would come here and see how cool it is.”

He knows his stuff.

Magnus knows that the entrance to Lyman Beecher’s study used to have double doors and that there was a second door to the outside so that Stowe’s father could let his students come and go without disturbing the rest of the family.

He knows that Stowe was an adult by the time her family moved to Cincinnati, but she moved with them because she was unmarried.

And he knows that without the time she spent in Cincinnati, Harriet Beecher Stowe probably would never have met the people and learned the stories that inspired her to write her famous book, “Uncle Tom’s Cabin.”

‘All the history’ is the best part

Magnus said his favorite thing about the house is “all the history it has.”

“Even after the Beechers moved out, there were multiple generations that all contributed to the neighborhood and the legacy of the house,” he said.

His favorite room is a sparsely furnished spot on the second floor known as “the archaeology room.” That’s where pieces of the house’s history are on display, most of them found by archaeologists who have worked to dig into the history of the history site.

Plastic bags hold historic wallpaper, which is thick because it’s embedded in plaster, and two different types of nails found in the building.

The square-headed nails are the oldest, Magnus explained, because they had to be made by hand. The round-headed nails were mass-produced and are in parts of the house that have been renovated or are more modern.

Once 10 additional youth docents are selected, they will go through training just like Magnus did. The organization is taking applications from students in grades eight through 12, Hartlieb said.

Magnus plans to continue to serve as a tour guide and a mentor in the expanded program. His dad thinks it’s somewhere he could continue to volunteer through high school, college and beyond.

Magnus said he might be a little nervous about his new role, but he’s up to the challenge.

“I think it’s pretty cool to kind of have a leadership role in something outside of school,” he said. “I think it will be something that I can get used to over time.”

The Harriet Beecher Stowe House is accepting applications for its Youth Docent Program through June 30. The program will kick off Aug. 24. More information about the program and how to apply is available online.

The historic site will celebrate Harriet Beecher Stowe’s birthday from 1 p.m. to 4 p.m. on Sunday June 9. There will be cake, ice cream and live music. More information and a link to RSVP is available online.