What if a blood test could reveal PTSD in a patient -- and the best treatment? 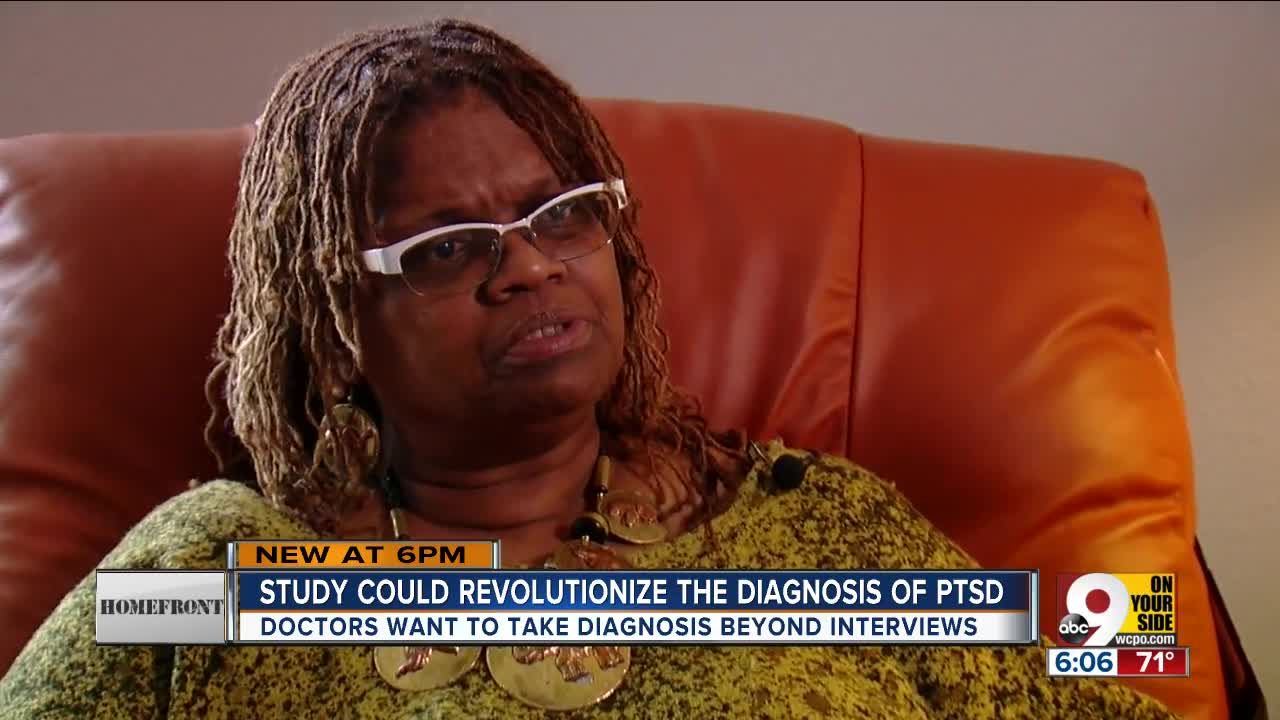 Dr. Kate Chard says she and her team are working to find where PTSD biomarkers live in DNA.

Imagine having flashbacks. Fear. Severe anxiety. Sleeplessness. A mind that just won't let itself turn off.

Every night. And she has for decades.

“I was about 22 years old,” Eady said in a recent interview with WCPO.

Eady uses scents to calm her and surrounds herself with inspiring words to help her cope with what has been labeled Military Sexual Trauma.

”So I was a baby, and it really affected me," she said. "But I kind of threw it out of my mind because ‘I’m gonna be in the Air Force. I’m gonna be an officer, and I’m gonna make a career out of this.’”

Documents tell the story of an honorable discharge.

But even after 40 years, “I don’t want a man touching me," Eady said. "I don’t want to be intimate with anyone. And that’s bad because the ultimate feeling in life is to love and be loved.”

All these decades later, Eady needs those scents and the words; she needs anything that can keep her mind from wandering to those traumatic events during her time in the service.

In search of other things that might help, Eady enrolled in a study that has the potential to diagnose people with PTSD, or post traumatic stress disorder.

Dr. Kate Chard is in charge of the study and says she and her team are working to find where PTSD biomarkers live in DNA. The Cincinnati VA Medical Center is enrolling veterans in the study in Cincinnati.

If things go how Dr. Chard hopes, the study could revolutionize the diagnosis and treatment of a disorder that, at any given time, makes it much harder to go about daily life for around 8 percent of the general population. For those who have served in the military, that number is anywhere from 11 to 30 percent.

Dr. Chard and her team of researchers are looking for proteins and neurochemical reactions underlying PTSD to not only identify who has it, but how likely it is to manifest itself in different forms.

Eady, who is from Kentucky, currently receives compensation for PTSD, but has been told the disorder is in remission, which Eady vigorously disputes.

In order to better understand Eady's symptoms, WCPO's Kristyn Hartman stayed overnight at Eady's apartment to observe one of the symptoms she's been living with for decades: sleeplessness.

In the hours Hartman was with her, Eady got in and out of bed repeatedly.

She walked around her apartment.

She checked the fridge.

She tried reclining in a chair.

She tried going back to sleep.

Insomnia is just one of the things Eady hopes she can help the VA study in order to improve the lives of veterans and active duty military. Eady is also quick to get angry, and she has a hard time pushing unwelcome thoughts from her mind. She hopes this study can radially change the way PTSD is currently diagnosed and treated.

So how is PTSD identified now?

But what if PTSD could be identified in someone using a scan or blood work?

Dr. Chard is using $4.3 million from the Department of Defense to test the idea that PTSD reveals itself precisely and for an accurate and specific diagnosis rooted in body indicators. Researchers are taking blood and saliva samples from more than 700 active duty military and veterans, including Eady, in an attempt to find those PTSD biomarkers.

"A biomarker can be be a whole host of things," Dr. Chard said. "It can be a chemical compound. It can be a protein in your system.”

That protein might spike with the stress of the disorder. Or, PTSD could show itself in electrical activity patterns in the brains of veterans who enroll in the study.

“We’re looking to see if there are brain regions that say ‘Hey’ in people with PTSD," Research Assistant Jennifer Johnson said. "This area of the brain is a little more active than some who don’t have PTSD.”

Dr. Chard said that she believes pinpointing PTSD biomarkers, or establishing what they look like in brain waves, will open the door to more targeted, effective therapy that could help people in uniform.

“To me the entire goal of the study is to help more patients get back to a high quality of life much earlier,” Dr. Chard said. “We literally, for some of these men and women, took away the only job they ever wanted when they developed PTSD. And if we could get them accurately and effectively treated before they even left the Department of Defense, and allowed them to keep that job, to me that’s a complete win.”