His art pulled him up from his lowest point. He's hoping it can push him to new heights, too 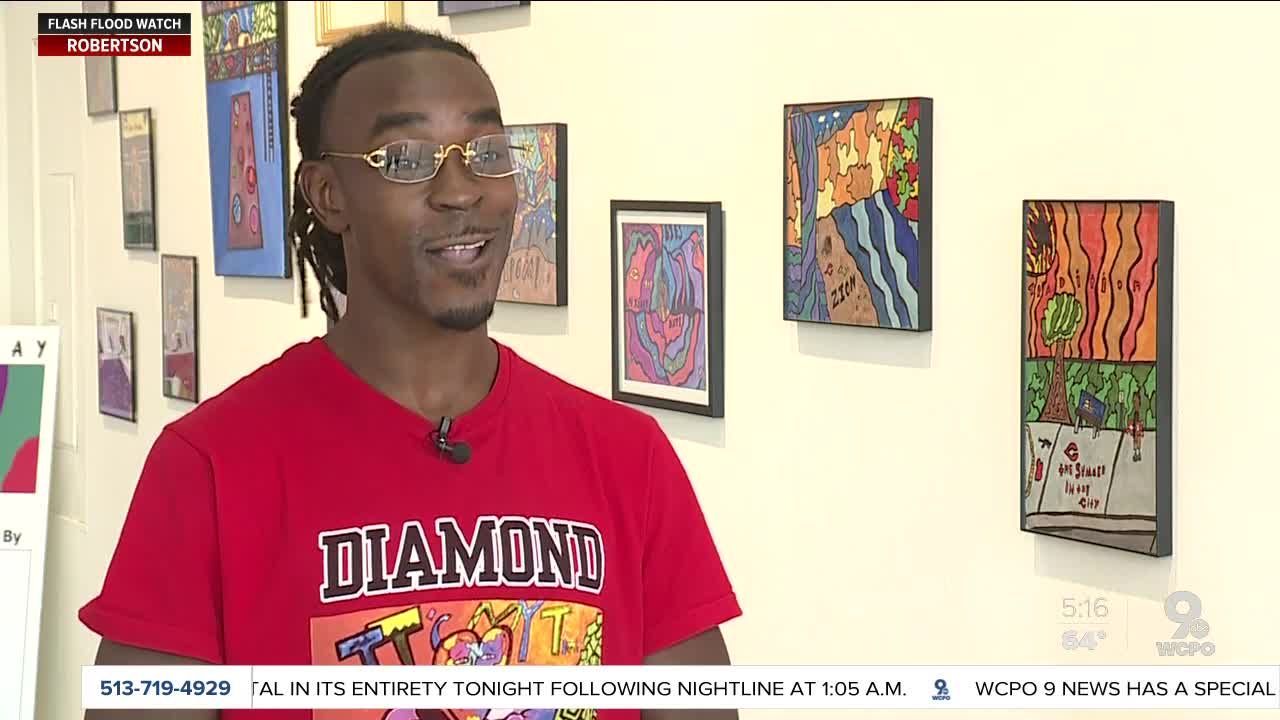 Jeremy Smith's art pulled him up from his lowest point. He's hoping it can push him to new heights, too. 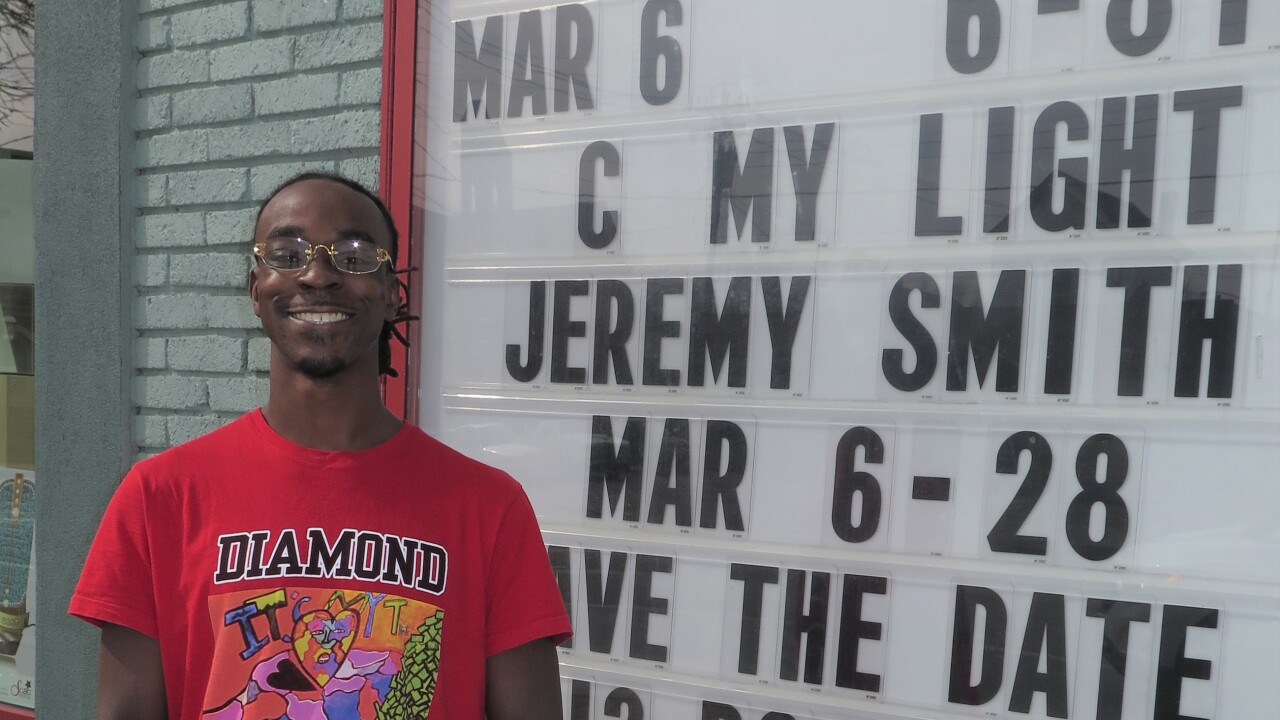 SHARONVILLE, Ohio — When Jeremy Smith realized he wouldn't achieve his dream of becoming a professional basketball player, he lost himself to despair.

Smith was away in Georgia for college. He slept nonstop, isolated himself from friends and managed to hide his troubles from his mom back in Cincinnati.

Then he discovered a passion for drawing and painting — and found new hope in the process.

“I was able to express myself through art at that time, and it was a critical moment,” said Smith, who is now 29 and many years removed from that low point. “Through depression and anxiety and all of those things, it was a therapeutic tool for me to get to where I am now.”

Now Smith is the featured artist for the month of March at the Sharonville Cultural Arts Center’s Westheimer Gallery. His debut exhibit, “C My Light,” explores his life in artwork that blends joyful, bright colors with challenging themes such as incarceration, gun violence and poverty.

“It’s not that it’s a caricature or an allegorical piece or something that looks like it might have come out of graffiti off of a wall,” said Matthew Taylor, the Sharonville Cultural Arts Center’s development director. “It’s all of those things combined.”

The exhibit wouldn’t be happening at all if not for a chance encounter early last year.

Smith had just visited the Ohio Bureau of Motor Vehicle’s Sharonville office to get his driver’s license when he noticed the Sharonville Cultural Arts Center’s gallery space.

“I was looking for galleries throughout the city to get my start, to get my debut,” he said. “I seen it, and I just had to walk in. It was inviting. It was something that was just basically calling me.”

Smith went inside and met Taylor and his wife, Michelle Taylor, the center’s executive director. They talked with him about his artwork and invited him to come back and show them some examples.

“He kind of sold us right from the beginning,” Taylor said. “The very cool thing about Jeremy is — and I tell people this all the time — you don’t just get Jeremy’s art. You get Jeremy’s thoughts as well.”

Smith started his exhibit at the very beginning with a drawing called “Dive into Destiny.” The image depicts what Smith envisions when he visualizes what his world looked like before his mother and father created him. The image shows a person atop a diving board, preparing to jump into a pool filled with planets.

“Ultimately you have to dive into your destiny,” Smith said. “Jump into whatever it is you’re doing and jump into the universe.”

Several drawings honor Smith’s daughter, Oni. He portrays her as a beautiful flower growing out of her mother’s hand. Another drawing features a teddy bear, one of Oni’s favorites, with a message that encourages children to hold tight to their sense of self the same way they hold onto their favorite toys.

Other works of art explore the pain of death and losing important relationships.

One drawing depicts an incarcerated young man with a star for a head, which represents a friend behind bars.

“As well as losing people to death, we lose people to the system of incarceration,” Smith said. “My brother Fresh, he’s the inspiration behind that and how people behind those walls are stars. I definitely wanted to do a piece that was dedicated not only to him, but to other family members, other friends, that have gone through this process and gone through the system but were not acknowledged as stars. I’m here to acknowledge their greatness.”

‘It makes you think’

Smith hopes to help those friends in other ways, too, through his art and design business Diamond Minds Enterprises. Already Smith is printing T-shirts that feature his art and is selling copies of his 2016 book “C My Light: art journal of a young black man.”

At the same time he’s working in sales at a Macy’s credit card call center to earn a steady paycheck, Smith also is working to build his own business.

It took him a year to create enough art for his debut exhibit. He wants to build Diamond Minds to the point where he can hire other artists and employees to fulfill orders and print T-shirts, especially people who are looking to rebuild their lives after incarceration, he said.

Smith worked with the Greater Cincinnati and Northern Kentucky African American Chamber of Commerce to develop his long-term business plan, he said, and he expects Diamond Minds to be a lot bigger within five years.

“I see Diamond Minds Enterprises being a staple in Cincinnati, first and foremost,” he said, adding that he wants to be able to hire and support other aspiring artists and sell his work internationally. “That’s what I see myself doing in the next five years, just expanding and growing.”

His mother, Vickie Brown-Smith, said she is proud and amazed at what her son has been able to achieve with his artwork so far.

Brown-Smith has worked for the juvenile court system for nearly 30 years, she said. But even with all her experience with young people in crisis, she had no idea how much her son was struggling when he was in Georgia.

“He really was available to be ate up by the world as far as I’m concerned,” she said. “But he had love and support around him to guide him.”

One of Brown-Smith’s favorite pieces among her son’s works of art is one titled “C the Summer in the City.” It shows a child standing on a sidewalk clutching a teddy bear. A gun sits a few feet away next to a puddle of blood and some crime scene tape. A small sign next to the child says simply, “Help.”

“That little kid is just standing there with this teddy bear, which is really a symbol for purity,” she said. “And that little sign. It says 'help' on it as if it was on a stop sign. That really speaks to me. It resonates with me with what I do.”

It’s an example of how Smith contrasts stark images and realities with hope and encouragement to communicate what he and other people — especially young black men — deal with throughout their lives.

The material can be challenging, Taylor acknowledged, but that’s part of what makes it art.

“Art isn’t passive,” he said. “It always makes you talk. The other thing it does is it makes you think.”

Smith said his art helped heal him, and he hopes it can help him reach new heights while helping others, too.

He stood before the final piece in his exhibit, a large canvas that captures the path that Smith has traveled, with boxes labeled poverty, struggle and pain. Some boxes have hands reaching from the top of them, while others are closed up tight.

“I’m one of those hands reaching out,” Smith said. “This is how I’ve chose to reach out and reach out to the world through those boxes I’ve been placed in. And to recognize it and know that you can ultimately overcome it. You can fly above it if you just hold your heart in your hand and show the world.”

Jeremy Smith’s “C My Light” is open to the public at the Sharonville Cultural Arts Center’s Westheimer Gallery from 3-7 p.m. on Thursdays and Fridays and from 10 a.m. to 2 p.m. on Saturdays through March 28 or by appointment.

His art journal is available for purchase at the gallery or on Amazon. He plans to sell other products on his business website.

Smith also is raising money through a GoFundMe campaign to expand his business, Diamond Minds Enterprises.