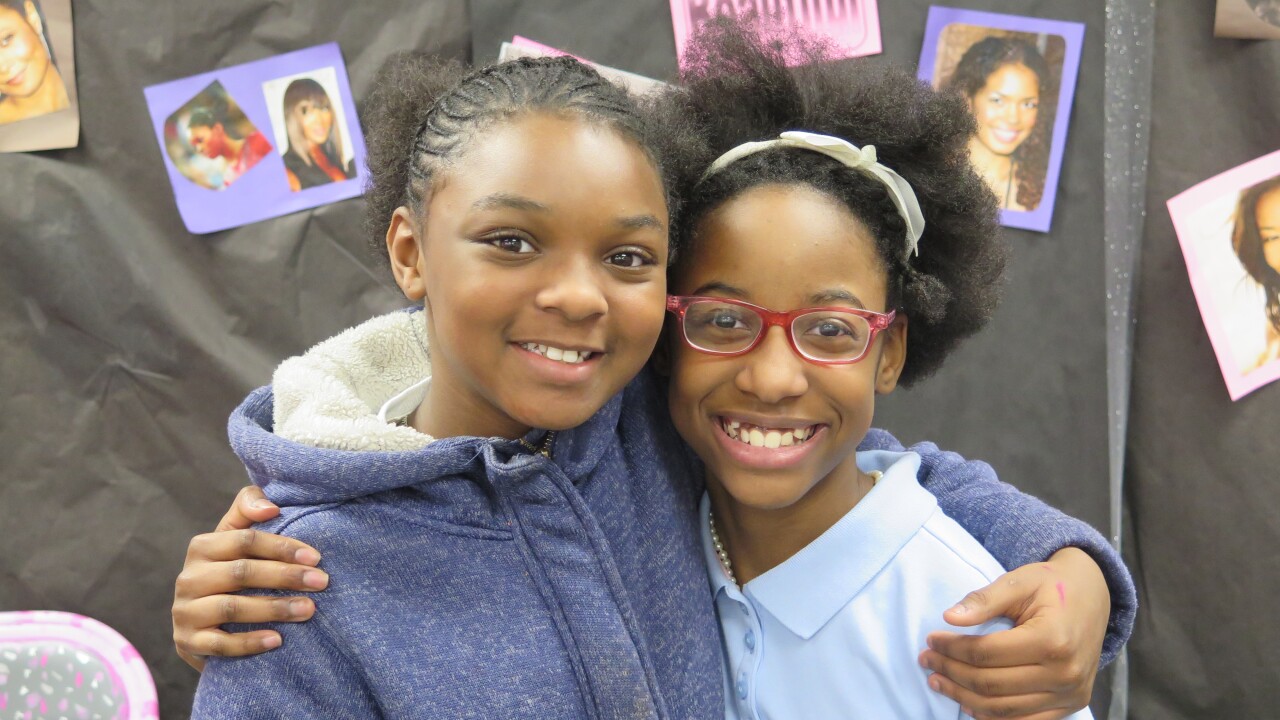 Lucy May | WCPO
Rockdale Academy students Briy&#39;onna Riston, left, and Jazzman Cannady both said they feel loved and supported in their school&#39;s Girls With Pearls group. 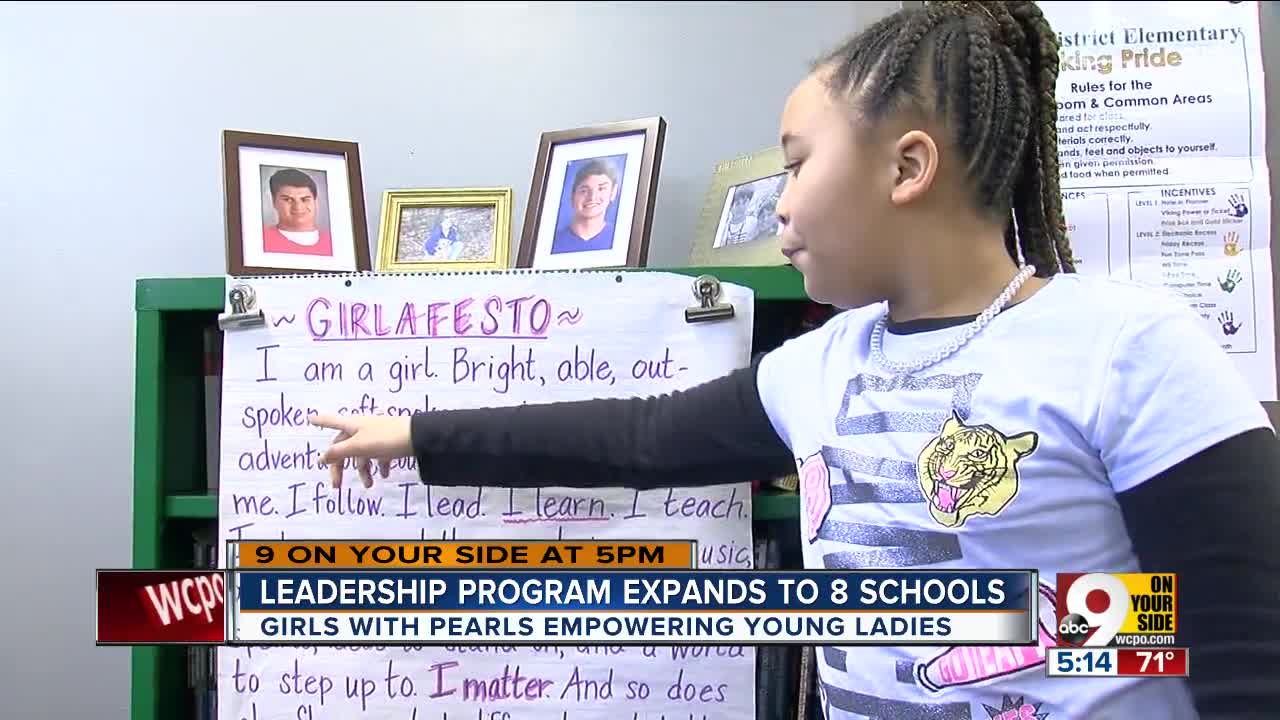 CINCINNATI — As a third-grader, Briy’onna Riston used to break rules and hit people, she said. Being part of a leadership program called Girls With Pearls changed her for the better.

“I learned how to act like a lady more,” said Briy’onna, now a sixth-grader and class president at Rockdale Academy in Avondale. “Girls With Pearls is a place where everyone can feel comfortable and let everything out and know that everyone loves them here.”

The girls-only initiative started at Rockdale three years ago and became a program of Most Valuable Kids in 2018. It now includes a total of eight schools in Cincinnati and Northern Kentucky.

Executive director Tamie Sullivan said that growth shows just how much the program is needed for girls in fourth, fifth and sixth grades.

“Their bodies are changing. So much is going on,” Sullivan said. “The vision for me is to have these girls become leaders and have them feel supported by a whole bunch of women leaders in our community.”

Rockdale Academy principal Belinda Tubbs-Wallace said the program has had a clear impact at her school. Before Girls With Pearls, Tubbs-Wallace was trying to support girls at Rockdale herself, which she said was difficult to do on top of all her administrative duties.

“This is a rough neighborhood," she said. "I started seeing this spirit of toughness, and you have to be tough, and everything appears to be a fight and a battle. It doesn’t have to be.”

Girls With Pearls has taught its members how to navigate conflict and better control their reactions when things don’t go as planned, Tubbs-Wallace said. The girls in the group also are quicker to take responsibility if they make a mistake by apologizing and holding themselves accountable.

“The teachers are noticing a difference in their attitudes and the way they approach situations,” said Patricia Thomas, the Girls With Pearls facilitator at Rockdale. “It’s sort of setting the tone for what’s next for them in seventh and eighth grade. If we can begin to build a strong sense of self and build confidence, if we can begin creating that structure now, it’s going to be huge in the next years of their life.”

‘Now I don’t get in trouble as much’

This is the first year Ninth District Elementary School in Covington has had Girls With Pearls, and it already is making a difference, according to program leader and assistant principal Kieli Ferguson.

“We consider ourselves an inner-city school that services a very diverse population,” Ferguson said. “We felt like it would be something that would help our students to grow.”

Ten of Ninth District's fourth-graders and eight of its fifth-graders started participating in Girls With Pearls in October. Even just a few months into the program, Ferguson said she has noticed a “huge difference” in the students.

“Our girls have definitely grown,” she said. “Behavior in the classrooms has been very positive. They’re able to empower each other. They’re comfortable supporting each other.”

Fourth-grader Tangela Tebelman said she has seen a difference in herself because of what she has learned.

“My life is different because, like, I don’t yell at my brothers,” she said. “Before Girls With Pearls, I would yell at them because they would get on my stuff.”

Tangela also hasn’t been talking as much in class since she began the program, she said. Instead, she writes herself notes.

“Now I don’t get in trouble as much,” she said.

The group also offers new experiences to the girls who are involved. Speakers visit schools to make presentations, and the girls go on at least four field trips each year. The most recent field trip took all eight Girls With Pearls groups to the University of Cincinnati so their members could see what college life is like.

Ninth District Elementary also had Miss Kentucky come speak to its members last year, for example, and the school took its Girls With Pearls members to the ballet.

“I had one parent who came to the office, and she cried,” Ferguson said. “When she heard about taking her child to the ballet, she said that was an opportunity she never would have been able to afford.”

The girls sat in rapt attention, wearing the program’s signature imitation pearls around their necks to identify them as leaders.

With a strand of pearls around her neck and a gun at her hip, Davis recited the “Girlafesto” with the group and answered their questions.

She told them how she uses her voice and authority to stop suspects instead of chasing them down.

“It’s not the uniform you have on,” she said. “It’s what you have inside.”

The importance of what’s inside is a theme that resonates throughout Girls With Pearls. PEARLS values are: Purpose, Empowerment, Attitude, Responsibility, Leadership and Service.

The women who run the programs at each school aim to create “safe spaces” where girls can talk about what is on their minds, whether it’s positive or negative.

Thomas starts her after-school Girls With Pearls meetings by asking the girls to give a thumbs-up, thumbs-sideways or thumbs-down about their day.

Then she asks the girls they want to talk about the reasons for their ratings before she starts the more formal agenda for the program.

“Whatever they’re dealing with at home or whatever their challenges are, those don’t go away because I’m holding an agenda in my hand,” Thomas said.

The program uses the Smart Girls curriculum provided by Boys & Girls Clubs of America, and Thomas said she likes the fact that she can use the curriculum in a way that works best for the girls.

During a recent meeting, the girls in Rockdale’s group heard from a financial literacy expert to get a lesson on budgeting and the difference between expenses and disposable income.

One said she wanted a 14-bedroom house. Others said they wanted to become doctors or entrepreneurs.

The simple fact that they have the confidence to express those aspirations is a big change from when Girls With Pearls started three years ago, Sullivan said.

She still volunteers for the program at Rockdale, and she said seeing such important changes in the girls makes her heart full.

Briy’onna, who went from troublemaker to class president, said she wants to study science after she graduates from high school because that’s her favorite subject.

Jazzman Cannady, a fifth-grader at Rockdale, said she wants to go to college and become a pediatrician.

“A lot of my family takes care of kids,” she said. “And I’m very good with math and science.”

Jazzman is new at Rockdale this year. She joined Girls With Pearls to make new friends and said she would recommend it to any girls thinking about joining their school’s group.

“If you have something going on at home, you can come to Girls With Pearls, and they can be kind to you and show you some love,” she said. “This is a very caring and peaceful environment.”