From The Vault: Why Cincinnati's airport is in Kentucky 70 years after first flights 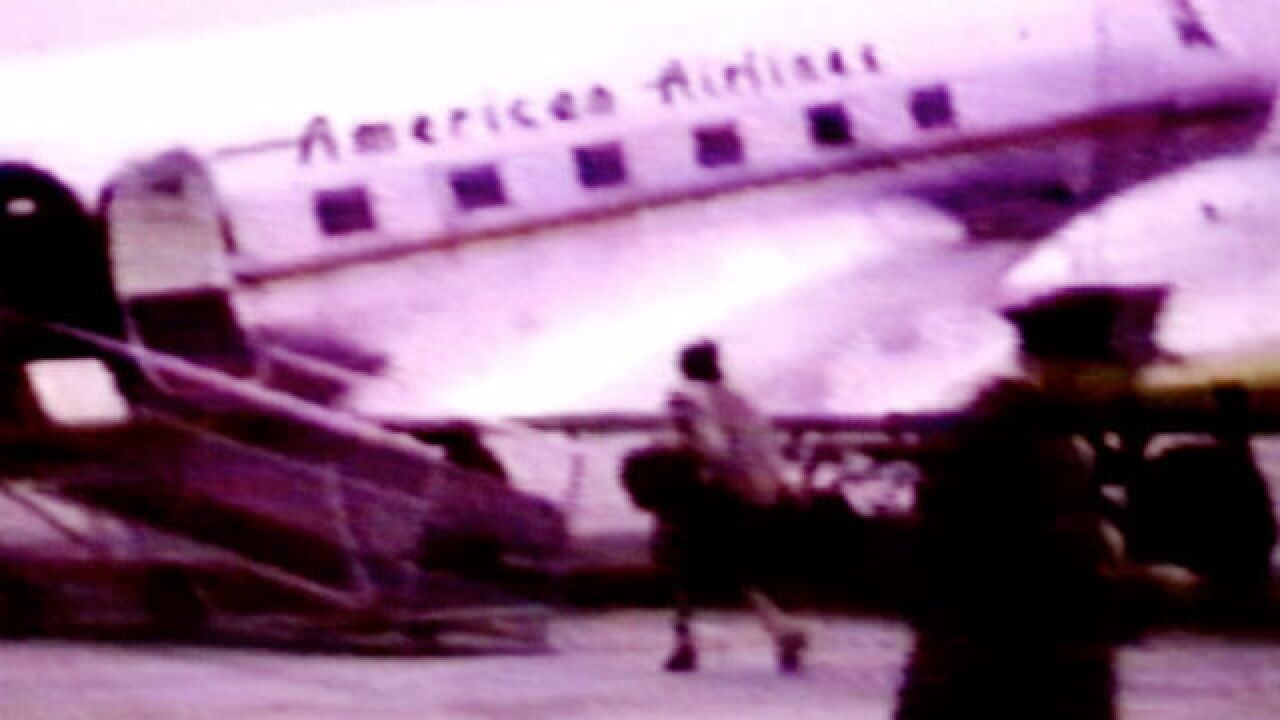 Copyright 2017 Scripps Media, Inc. All rights reserved. This material may not be published, broadcast, rewritten, or redistributed.
<p>Passenger runs to get on a DC-3 departing from Greater Cincinnati Airport in 1947.</p> 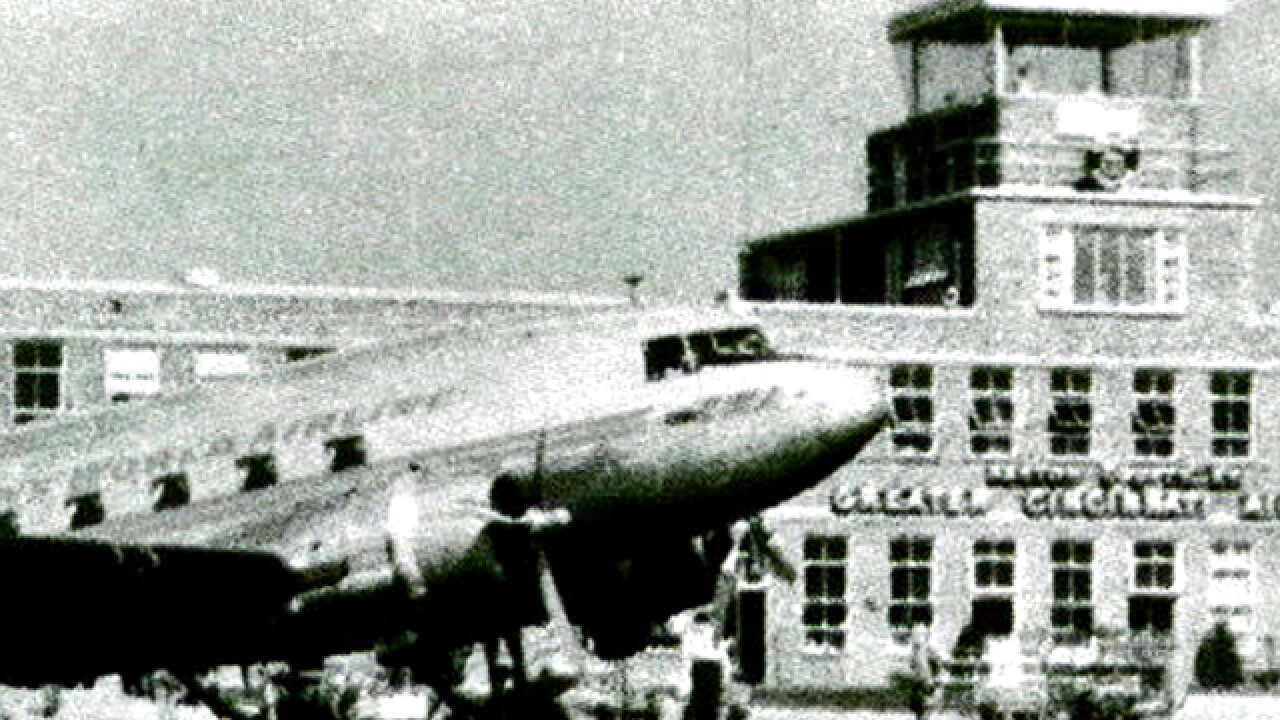 HEBRON, Ky. – Out-of-town flyers expecting to land in Cincinnati sometimes look surprised when the flight attendants welcome them to Kentucky.

It's not the only surprise they get when they arrive here.

Why does my baggage ticket say CVG, they wonder, when they expect the airport code for Cincinnati/Northern Kentucky International Airport to be CIN?

They're lucky their tags aren't marked CIN, though, or their bags would wind up in Carroll, Iowa.

The answers go back seven decades to a time when some politically-savvy Northern Kentuckians stole the region's commercial airport out from under the noses of some sleepy Ohio politicians and voters.

WATCH the first commercial flights land and take off from CVG in the video player above.

Lunken Airport on the city's east end was the Tri-State's center for commercial air traffic at the time World War II was beginning in Europe. But geography, the Great Flood of 1937, the war and the shortsightedness of Cincinnati leaders and voters helped change all that.

Lunken, a city-owned airport laid out in the Ohio River valley, was prone to flooding. In 1937, it was 20 to 30 feet under water. The nearby hillsides, which often locked in fog, also prevented the airport from expanding the runways beyond 4,200 feet.

When the war started, the Army Air Corps looked across the country for airfields where they could train pilots – or places where they could build training fields. Lunken's runways were too short for bombers, and the city never offered it to the Air Corps. Besides that, Hamilton County leaders were fighting among themselves. Several pushed for a new airport in Blue Ash, only to have voters turn it down.

A Northern Kentucky congressman named Brent Spence (later memorialized with a bridge) and other NKY leaders saw an opportunity to get into the air travel business. Boone County, widely undeveloped in those days, had plenty of flat farmland but no money. Kenton County agreed to buy nearly 900 acres 12.5 miles from Fountain Square as long as it could own and run the airport.

Spence and Sen. Alben Barkley lobbied for federal funds, and two months after the attack on Pearl Harbor, FDR approved money for site development. Ultimately, Northern Kentucky got $2 million to build four 5,500-feet runways and an administration building. In the days before I-275, State Highway Commissioner Lyter Donaldson arranged for public money to build an east-west highway to the airport, named Donaldson Road.

By the time the Army Air Corps started using the facility and the first B-17 landed on Aug. 15, 1944, the war was winding down. A year later, the Air Corps declared it surplus property and turned it over to the local governments.

Or CVG, for short. The airport code stands for Covington. CIN was already taken by a sleepy, little Iowa town – not that Northern Kentucky leaders would have used it anyway. They grudgingly called it Greater Cincinnati Airport but made sure the sign over the front entrance to the terminal also said Kenton County, Ky.

That's right: an airport named after a city in another state and the county next door.

CVG had more and longer runways than LaGuardia, and onlookers enjoyed watching planes take off and land from the observation deck on the terminal roof.

"This is one of the finest airports in the country. I'm awfully glad to be using it," said Capt. B.W. Robinson, who flew the first commercial flight into CVG.

The first flights – two-engine DC-3s with 14 sleeper seats - landed Friday morning, Jan. 10, 1947. An American flight from Cleveland was first to arrive at 9:23 a.m. A Delta flight from Atlanta was less than a minute behind. TWA was five minutes behind Delta.

Several hundred curious witnesses, airport employees and local dignitaries cheered as the wheels touched down, according to the Kentucky Post. The first two passengers to step off were Eleanor Fish, of Troy, Ohio, and Jack P. Rattner of Clifton. They were startled by flashbulbs as they deplaned, the Post reported.

But J.L. Wiggins and her four-month-old son, Jimmy, had the most unusual trip.  She expected to change planes after they flew into Lunken at 5:20 a.m. from South Carolina, but she didn't know they had to change airports, too.

A limo drove them to CVG, where Wiggins bought the first ticket ever sold in the terminal to take them to Akron on the first plane out at 9:35 a.m.

Hamilton County leaders didn't give up the airport without a fight. They took two more shots at passing a levy, but Blue Ash residents aggressively opposed and defeated it.

That's why, 70 years later, West Siders trying to avoid I-75/71 traffic get the rare privilege of driving through three states to and from the airport.

SEE more video and stories about Tri-State history in our From The Vault series.